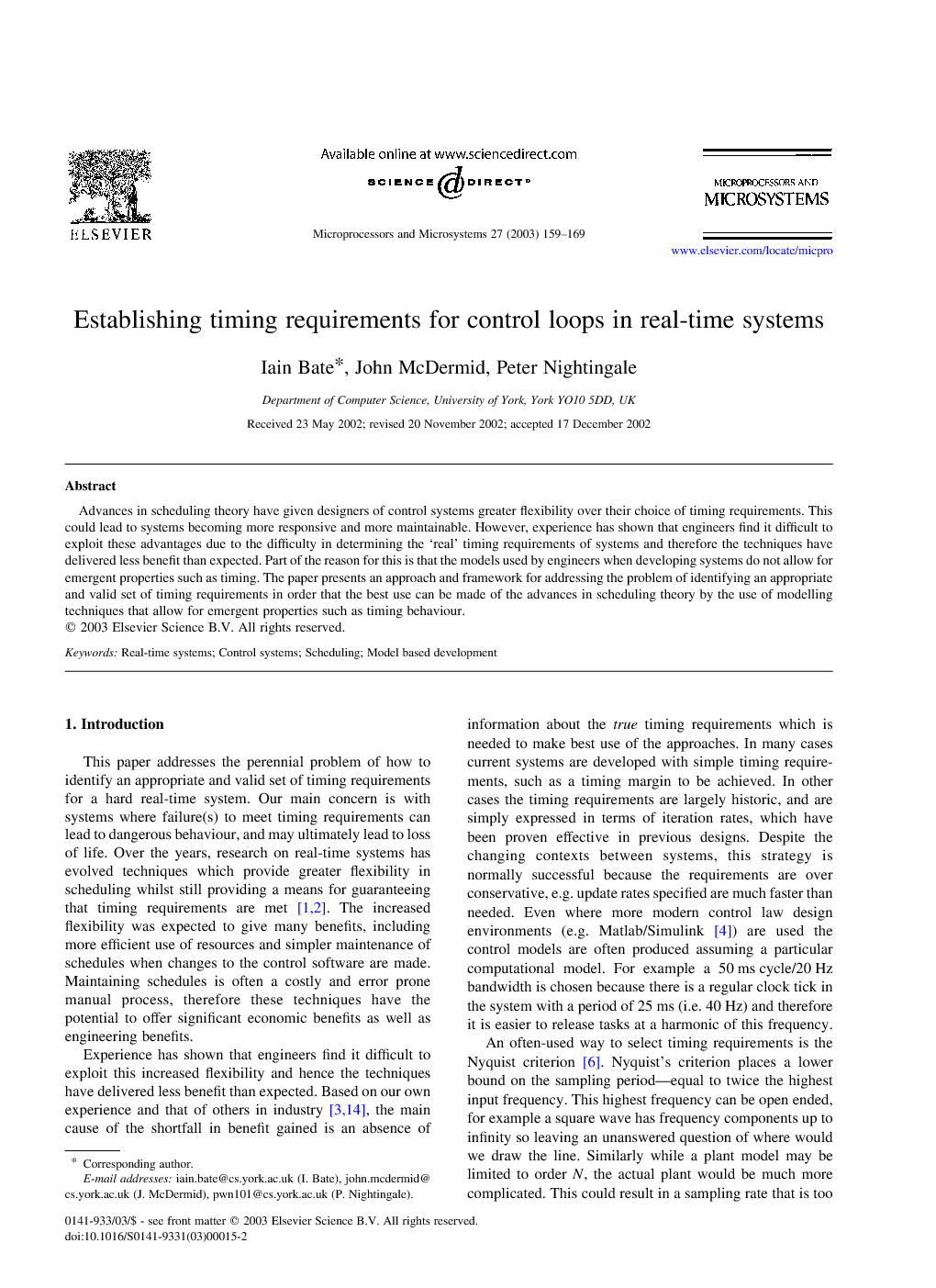 Advances in scheduling theory have given designers of control systems greater flexibility over their choice of timing requirements. This could lead to systems becoming more responsive and more maintainable. However, experience has shown that engineers find it difficult to exploit these advantages due to the difficulty in determining the ‘real’ timing requirements of systems and therefore the techniques have delivered less benefit than expected. Part of the reason for this is that the models used by engineers when developing systems do not allow for emergent properties such as timing. The paper presents an approach and framework for addressing the problem of identifying an appropriate and valid set of timing requirements in order that the best use can be made of the advances in scheduling theory by the use of modelling techniques that allow for emergent properties such as timing behaviour.

This paper addresses the perennial problem of how to identify an appropriate and valid set of timing requirements for a hard real-time system. Our main concern is with systems where failure(s) to meet timing requirements can lead to dangerous behaviour, and may ultimately lead to loss of life. Over the years, research on real-time systems has evolved techniques which provide greater flexibility in scheduling whilst still providing a means for guaranteeing that timing requirements are met [1] and [2]. The increased flexibility was expected to give many benefits, including more efficient use of resources and simpler maintenance of schedules when changes to the control software are made. Maintaining schedules is often a costly and error prone manual process, therefore these techniques have the potential to offer significant economic benefits as well as engineering benefits. Experience has shown that engineers find it difficult to exploit this increased flexibility and hence the techniques have delivered less benefit than expected. Based on our own experience and that of others in industry [3] and [14], the main cause of the shortfall in benefit gained is an absence of information about the true timing requirements which is needed to make best use of the approaches. In many cases current systems are developed with simple timing requirements, such as a timing margin to be achieved. In other cases the timing requirements are largely historic, and are simply expressed in terms of iteration rates, which have been proven effective in previous designs. Despite the changing contexts between systems, this strategy is normally successful because the requirements are over conservative, e.g. update rates specified are much faster than needed. Even where more modern control law design environments (e.g. Matlab/Simulink [4]) are used the control models are often produced assuming a particular computational model. For example a 50 ms cycle/20 Hz bandwidth is chosen because there is a regular clock tick in the system with a period of 25 ms (i.e. 40 Hz) and therefore it is easier to release tasks at a harmonic of this frequency. An often-used way to select timing requirements is the Nyquist criterion [6]. Nyquist's criterion places a lower bound on the sampling period—equal to twice the highest input frequency. This highest frequency can be open ended, for example a square wave has frequency components up to infinity so leaving an unanswered question of where would we draw the line. Similarly while a plant model may be limited to order N, the actual plant would be much more complicated. This could result in a sampling rate that is too high. Therefore practitioners normally assume the input signal can be represented by a frequency range within which N% of the intensity exists. Also, Nyquist's criterion is based on the assumption that the system under control is time invariant which in the case of a computer controlled system is not valid. Despite these assumptions, the Nyquist's criterion does not lead to instability as long as the time variations in when sampling occurs does not cause the bound on the sampling rate derived using Nyquist's criterion to be exceeded. The work contained in this paper does not purpose an alternative to the Nyquist's criterion but instead a complementary method. Even with Nyquist's criterion, there is a need to choose an actual sampling rate since the criterion only provides a lower bound on the rate. A major contributor to the methods using for selecting timing requirements is that the research and into the practical use of control theory and scheduling theory have largely been carried out in isolation [5]. Thus, for example, work on advanced control regimes such as H∞ [6], which might benefit from more sophisticated scheduling has not been the subject of joint work between control engineers and real-time systems researchers. Perhaps as a consequence there are few examples of H∞ being used in real-time embedded control systems. The paper presents an approach and framework for addressing the problem of identifying an appropriate and valid set of timing requirements in order that the best use can be made of the advances in scheduling theory. The essence of the approach is to use component-based models that allow for emergent properties of systems, in this case timing, so that the models are more representative of how a real system would actually behave. Then, heuristic search techniques are used to explore the design space and to identify timing requirements which enable properties such as control stability to be achieved, thus deriving and validating the requirements against more fundamental properties of the control system. The advantage of using heuristic search techniques instead of traditional model-based design approaches, such as root locus [6], include it allows many properties and effects to be considered at the same time and their demands on the system to be traded-off against one another. The work presented here is intended for use in a range of control problems, but is illustrated with the Proportional Integral Differential (PID) control approach [6]. The rest of the paper is structured as follows. Section 2 gives further background on the control techniques to be used in the context of this work. It also provides a technical motivation (as opposed to the ‘economic’ motivation outlined above) for seeking a systematic approach to deriving timing requirements. Section 3 presents the approach outlining the heuristics used, and the costs of evaluating the requirements. Section 4 contains two simple case studies which have been used to evaluate the approach, as well as presenting a discussion of how the resulting timing requirements may be used. Finally, Section 5 gives a summary and suggests possible future developments for the work.

In this paper, a framework for deriving and evaluating the timing requirements for control systems has been presented. For a given control system, the framework automatically evaluates the effect of jitter and period on control properties such as responsiveness and overshoots in-order to derive the set of requirements that meet our criteria, including stability. In other words, it addresses in an integrated way the issue of evaluating the effectiveness of the control system, and the possible realisation of the controller on a computer system. The use of the approach has been illustrated for two very different examples: a car cruise control system that is inherently stable and an inverted pendulum that is unstable without external control. The work has shown that for a particular system, the control criteria to be satisfied can be met, according to the chosen fitness function, with a wide range of timing requirements. The ability to select the requirements from a variable set can be used to optimise the timing behaviour of the overall system to improve schedulability and scalability. In general, the advantage of our approach is that it enables control and scheduling issues to be addressed in an integrated way, producing valid and appropriate requirements. If it fulfils its promise then there should be less problems of ‘mismatch’ between the control systems designers and the software engineers who have to implement their requirements. More specifically, the use of the approach make it less likely that control problems, e.g. instability, are discovered in system testing because the software engineers were working to inappropriate or incomplete requirements. The tools we have developed provide a ‘proof of concept’. Future work could include: determining the optimum balance of timing requirements across multiple control loops and allowing for other resource contentions, further case studies, allowing for important effects such as disturbances (e.g. noise) and non-linear effects, and expanding the framework for so called robust controllers such as H ∞ [6]. A robust controller is where the effects of time varying behaviour (e.g. jitter on sampling and actuation) and missed samples are accounted for. The disadvantages of robust controllers are: the extra processing needed due to their increased mathematical complexity, the difficulty in assuring their behaviour in all situations and their use in the real-time systems domain is not normal practice. Supporting robust controllers in the framework would allow comparisons to be performed between the relative effectiveness of PID loops versus robust controllers, and thus give designers a more effective tool for selecting control algorithms and establishing the requirements for their software implementation.