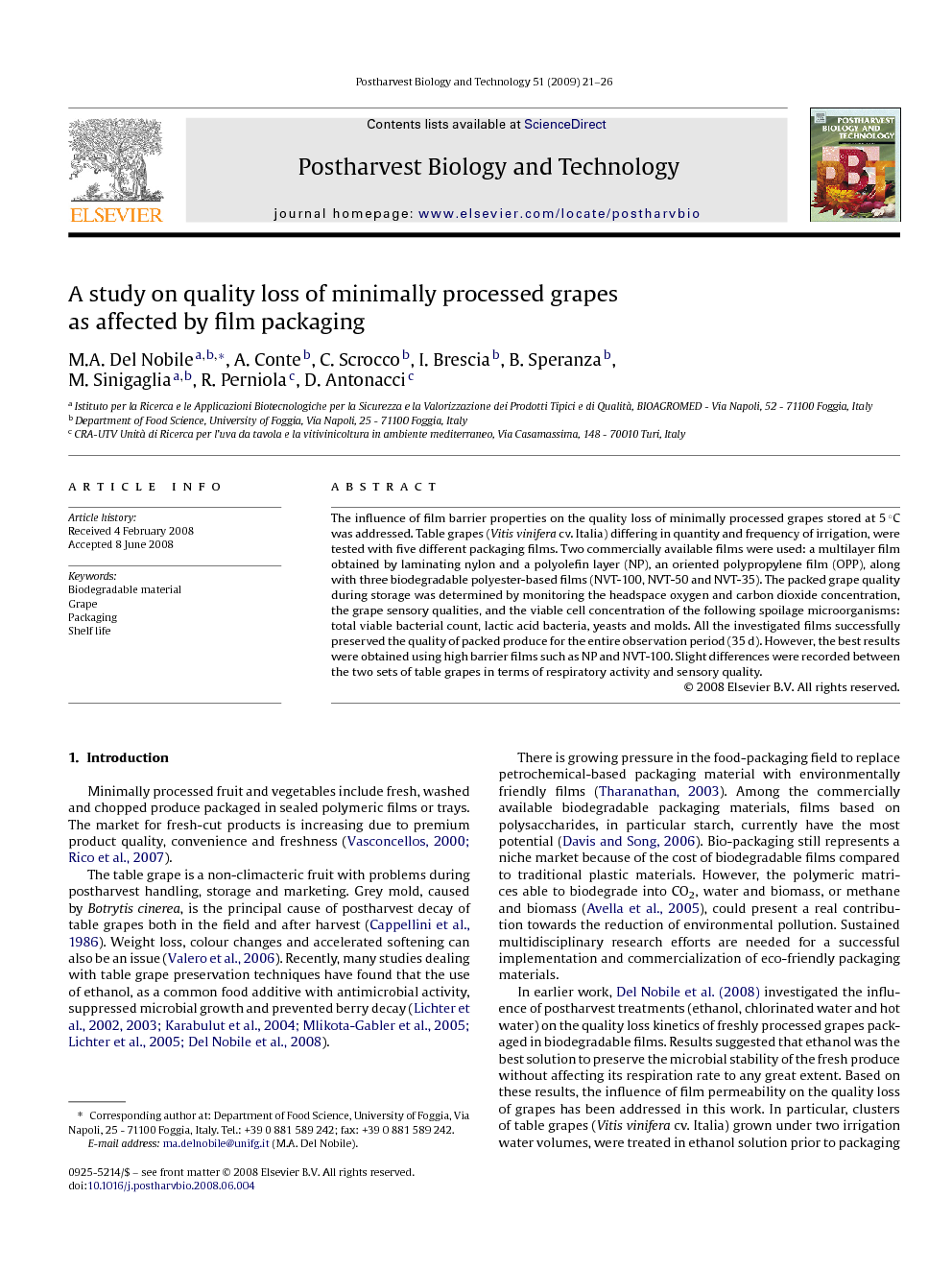 The influence of film barrier properties on the quality loss of minimally processed grapes stored at 5 °C was addressed. Table grapes (Vitis vinifera cv. Italia) differing in quantity and frequency of irrigation, were tested with five different packaging films. Two commercially available films were used: a multilayer film obtained by laminating nylon and a polyolefin layer (NP), an oriented polypropylene film (OPP), along with three biodegradable polyester-based films (NVT-100, NVT-50 and NVT-35). The packed grape quality during storage was determined by monitoring the headspace oxygen and carbon dioxide concentration, the grape sensory qualities, and the viable cell concentration of the following spoilage microorganisms: total viable bacterial count, lactic acid bacteria, yeasts and molds. All the investigated films successfully preserved the quality of packed produce for the entire observation period (35 d). However, the best results were obtained using high barrier films such as NP and NVT-100. Slight differences were recorded between the two sets of table grapes in terms of respiratory activity and sensory quality.

Minimally processed fruit and vegetables include fresh, washed and chopped produce packaged in sealed polymeric films or trays. The market for fresh-cut products is increasing due to premium product quality, convenience and freshness (Vasconcellos, 2000 and Rico et al., 2007). The table grape is a non-climacteric fruit with problems during postharvest handling, storage and marketing. Grey mold, caused by Botrytis cinerea, is the principal cause of postharvest decay of table grapes both in the field and after harvest (Cappellini et al., 1986). Weight loss, colour changes and accelerated softening can also be an issue (Valero et al., 2006). Recently, many studies dealing with table grape preservation techniques have found that the use of ethanol, as a common food additive with antimicrobial activity, suppressed microbial growth and prevented berry decay ( Lichter et al., 2002, Lichter et al., 2003, Karabulut et al., 2004, Mlikota-Gabler et al., 2005, Lichter et al., 2005 and Del Nobile et al., 2008). There is growing pressure in the food-packaging field to replace petrochemical-based packaging material with environmentally friendly films (Tharanathan, 2003). Among the commercially available biodegradable packaging materials, films based on polysaccharides, in particular starch, currently have the most potential (Davis and Song, 2006). Bio-packaging still represents a niche market because of the cost of biodegradable films compared to traditional plastic materials. However, the polymeric matrices able to biodegrade into CO2, water and biomass, or methane and biomass (Avella et al., 2005), could present a real contribution towards the reduction of environmental pollution. Sustained multidisciplinary research efforts are needed for a successful implementation and commercialization of eco-friendly packaging materials. In earlier work, Del Nobile et al. (2008) investigated the influence of postharvest treatments (ethanol, chlorinated water and hot water) on the quality loss kinetics of freshly processed grapes packaged in biodegradable films. Results suggested that ethanol was the best solution to preserve the microbial stability of the fresh produce without affecting its respiration rate to any great extent. Based on these results, the influence of film permeability on the quality loss of grapes has been addressed in this work. In particular, clusters of table grapes (Vitis vinifera cv. Italia) grown under two irrigation water volumes, were treated in ethanol solution prior to packaging in different bags made of two types of commercially available films and in three biodegradable polyester-based films. This was done in order to determine the role of the barrier properties of the selected packaging materials in influencing the loss of grape quality during storage.

The rate of quality loss of minimally processed grapes stored at 5 °C was determined and its relationship to packaging film barrier properties discussed in this study. Two different sets of table grapes were tested along with five different packaging films. Two commercially available films, as well as three biodegradable materials were used in this study. The headspace oxygen and carbon dioxide concentration, the grape sensory quality, and the viable cell concentration of the main spoilage microorganisms were monitored for about 35 d. Results suggest that the respiratory activity of packed fresh processed produce is the main reason for its quality loss during storage. In fact, the best results in terms of grape quality were obtained using the grapes with lower respiratory activity and high barrier films, such as NP and NVT-100. However, it must be highlighted that all the investigated films can successfully preserve the quality of packed produce for the entire observation period.