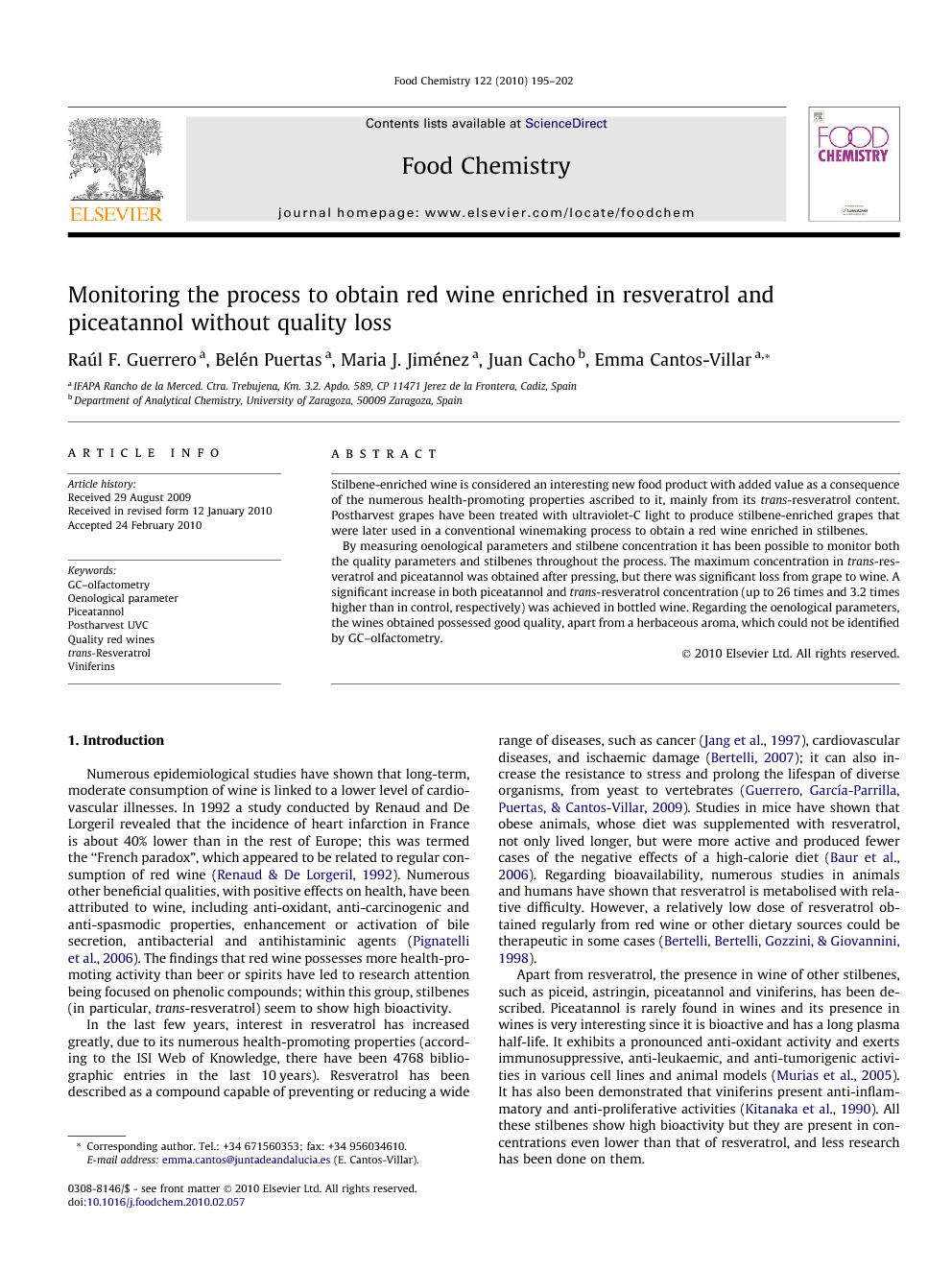 Stilbene-enriched wine is considered an interesting new food product with added value as a consequence of the numerous health-promoting properties ascribed to it, mainly from its trans-resveratrol content. Postharvest grapes have been treated with ultraviolet-C light to produce stilbene-enriched grapes that were later used in a conventional winemaking process to obtain a red wine enriched in stilbenes. By measuring oenological parameters and stilbene concentration it has been possible to monitor both the quality parameters and stilbenes throughout the process. The maximum concentration in trans-resveratrol and piceatannol was obtained after pressing, but there was significant loss from grape to wine. A significant increase in both piceatannol and trans-resveratrol concentration (up to 26 times and 3.2 times higher than in control, respectively) was achieved in bottled wine. Regarding the oenological parameters, the wines obtained possessed good quality, apart from a herbaceous aroma, which could not be identified by GC–olfactometry.

Numerous epidemiological studies have shown that long-term, moderate consumption of wine is linked to a lower level of cardiovascular illnesses. In 1992 a study conducted by Renaud and De Lorgeril revealed that the incidence of heart infarction in France is about 40% lower than in the rest of Europe; this was termed the “French paradox”, which appeared to be related to regular consumption of red wine (Renaud & De Lorgeril, 1992). Numerous other beneficial qualities, with positive effects on health, have been attributed to wine, including anti-oxidant, anti-carcinogenic and anti-spasmodic properties, enhancement or activation of bile secretion, antibacterial and antihistaminic agents (Pignatelli et al., 2006). The findings that red wine possesses more health-promoting activity than beer or spirits have led to research attention being focused on phenolic compounds; within this group, stilbenes (in particular, trans-resveratrol) seem to show high bioactivity. In the last few years, interest in resveratrol has increased greatly, due to its numerous health-promoting properties (according to the ISI Web of Knowledge, there have been 4768 bibliographic entries in the last 10 years). Resveratrol has been described as a compound capable of preventing or reducing a wide range of diseases, such as cancer (Jang et al., 1997), cardiovascular diseases, and ischaemic damage (Bertelli, 2007); it can also increase the resistance to stress and prolong the lifespan of diverse organisms, from yeast to vertebrates (Guerrero, García-Parrilla, Puertas, & Cantos-Villar, 2009). Studies in mice have shown that obese animals, whose diet was supplemented with resveratrol, not only lived longer, but were more active and produced fewer cases of the negative effects of a high-calorie diet (Baur et al., 2006). Regarding bioavailability, numerous studies in animals and humans have shown that resveratrol is metabolised with relative difficulty. However, a relatively low dose of resveratrol obtained regularly from red wine or other dietary sources could be therapeutic in some cases (Bertelli, Bertelli, Gozzini, & Giovannini, 1998). Apart from resveratrol, the presence in wine of other stilbenes, such as piceid, astringin, piceatannol and viniferins, has been described. Piceatannol is rarely found in wines and its presence in wines is very interesting since it is bioactive and has a long plasma half-life. It exhibits a pronounced anti-oxidant activity and exerts immunosuppressive, anti-leukaemic, and anti-tumorigenic activities in various cell lines and animal models (Murias et al., 2005). It has also been demonstrated that viniferins present anti-inflammatory and anti-proliferative activities (Kitanaka et al., 1990). All these stilbenes show high bioactivity but they are present in concentrations even lower than that of resveratrol, and less research has been done on them. Dietary sources of resveratrol are rather limited, grapes and their derivatives being the main source (Guerrero et al., 2009). Resveratrol is found in the seed and skin of grapes (not in the flesh) and, hence, in grape juice and wine. Its concentration in red wine is higher than in white one because in red winemaking the must, grape skin and seed are in contact during the whole fermentation process. The amount of resveratrol in wines varies widely depending on many factors: grape variety, geographic region, agronomic factors, climate, plant stress conditions and oenological practices all have an influence (Bavaresco, 2003). Regarding optimum oenological practices for increasing resveratrol content, all the processes that maximize the extraction of phenols from skin are recommended (Vrhovsek, Wendelin, & Eder, 1997). It is difficult to predict the amount of resveratrol in wines because of many factors affecting resveratrol biosynthesis. Different strategies can be undertaken to increase the concentration of stilbenes in grape, since these compounds are phytoalexins and, therefore, can be induced via different kinds of stress. In particular, postharvest treatment of grapes by ultraviolet-C light (UVC) has been suggested as suitable stress-promoting technology to obtain stilbene-enriched wine under laboratory conditions (Cantos, Espín, & Tomás-Barberán, 2003); however, the validity of the process needs to be confirmed in a standard-scale experimental winery as a prior step to industrial-scale production. Stilbene-enriched wines potentially offer added value compared to traditional wines (Barreiro, Colombo, & Cantos, 2008). In this study, the winemaking process has been monitored both by oenological parameters and by content in stilbene compounds, to obtain a stilbene-enriched wine of standard quality, using grapes enriched by postharvest UVC treatment. In addition, the organoleptic characteristics of the resulting wine were also investigated using a tasting panel and GC–olfactometry.

Although warm climates are associated with a low content of stilbenes in grape and wine, the stilbene content in grapes notably increased with postharvest UVC treatment. Grapes of the UV batch showed increased content in piceatannol, trans-resveratrol and viniferins, respectively, to around 7.4, 9.6 and 4.7 times the content measured in the non-treated controls.trans-Resveratrol concentration decreased progressively during winemaking, especially during AF; this is a finding which requires further research to determine by what mechanisms the trans-resveratrol is lost. The final bottled wine made from UV grapes contained 3.07 mg/l of trans-resveratrol (3.2 times the content measured in wine made from control grapes of the CT batch). Moreover, bottled wines of the UV batch also contained piceatannol (1.05 mg/l), which was not detected in any of the control wines (made from CT–CT and CT batches). In contrast, few significant differences were found in the oenological parameters of these three wines, measured during the course of the winemaking process. All the wines (from the CT–CT, CT and UV batches) presented satisfactory values for alcohol content, total acidity, pH, individual organic acids, metals, superior alcohols, anthocyanins, tannins and colour parameters. However, in the sensory analysis, herbaceous notes were found in all the wines. It was not possible to determine the particular compound responsible for this characteristic from the GC–olfactometry performed. Wine enriched in trans-resveratrol and piceatannol may provide an additional source of anti-oxidants. It is known that wine regularly consumed in moderate amounts has various beneficial health properties. These wines present added value to the consumer since, with the same ingestion of ethanol, the intake of stilbenes is significantly increased. Additionally, the pomace obtained as a by-product from UVC-treated grapes could be a source of viniferins for the manufacture of nutraceutical products. Postharvest UVC treatment of grapes is already being used to produce nutraceuticals (http://revidox.com/) and stilbene-enriched juice (González-Barrio, Vidal-Guevara, Tomás-Barberán, & Espín, 2009). The use of this technology for enriched wine still needs to be optimised, but it is a useful and promising technology for innovative companies in the highly competitive wine market.