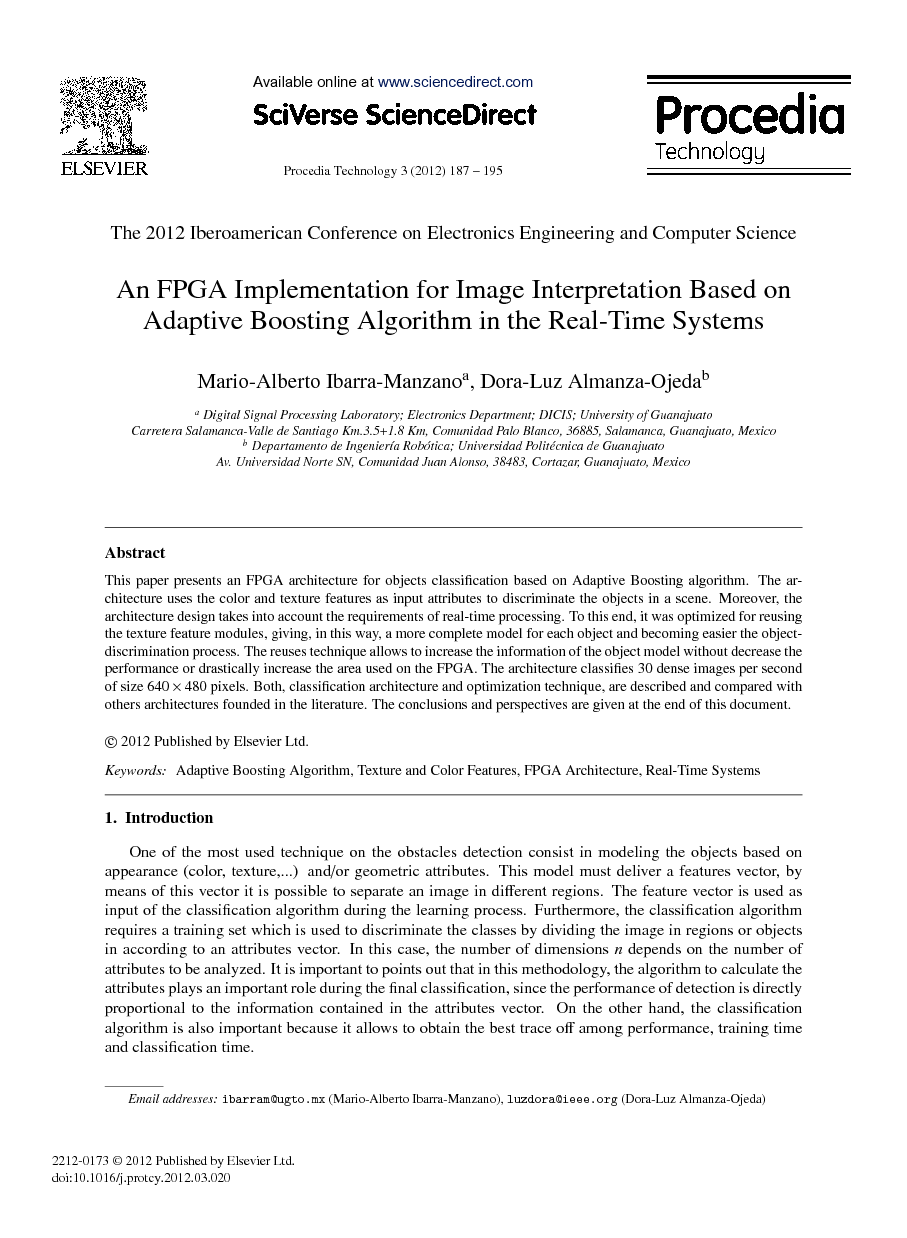 This paper presents an FPGA architecture for objects classiﬁcation based on Adaptive Boosting algorithm. The ar-chitecture uses the color and texture features as input attributes to discriminate the objects in a scene. Moreover, the architecture design takes into account the requirements of real-time processing. To this end, it was optimized for reusing the texture feature modules, giving, in this way, a more complete model for each object and becoming easier the object-discrimination process. The reuses technique allows to increase the information of the object model without decrease the performance or drastically increase the area used on the FPGA. The architecture classiﬁes 30 dense images per second of size 640 × 480 pixels. Both, classiﬁcation architec ture and optimization technique, are described and compared with others architectures founded in the literature. The conclusions and perspectives are given at the end of this document.

This paper describes how a complex classification function has been implemented on an FPGA-based architecture. It has been proven that same results are obtained with a software and the FPGA-based implementation. This effort agreed to design, implement and evaluate this architecture is justified for different reasons. By now the 30Hz frequency is a bound due to the camera characteristics; we could improve the reactivity with faster acquisitions. Using only software on a single core, it is not possible by now, to compute at 30 Hz AdaBoost algorithm on 640 × 480 images, even with an optimized code. Future works will be devoted to the evaluation of high level synthesis tool to generate such complex architectures. In order to improve the classification performance, an enriched attributes module consisting of more features is been analyzed. The total parameterization of the modules in function of the performance and resources will help to accelerate the design-time. At the same time the design will have a more accurate estimation resources and will let known an a priori performance value during the classification process.The outlook with respect to the embedded implementation are the method implementation in a Xilinx FPGA, this in order to compare the performance achieved with a different FPGA technology. In the same way, we want to make a comparison with others embedded technologies as DSP or GPU, however, in the last case highlighting not only the performance but also the power consumption. To complement the comparative analysis, we will make an analysis of energy consumption in both: for the final architecture and in each module, in order to complement the information of classification module.