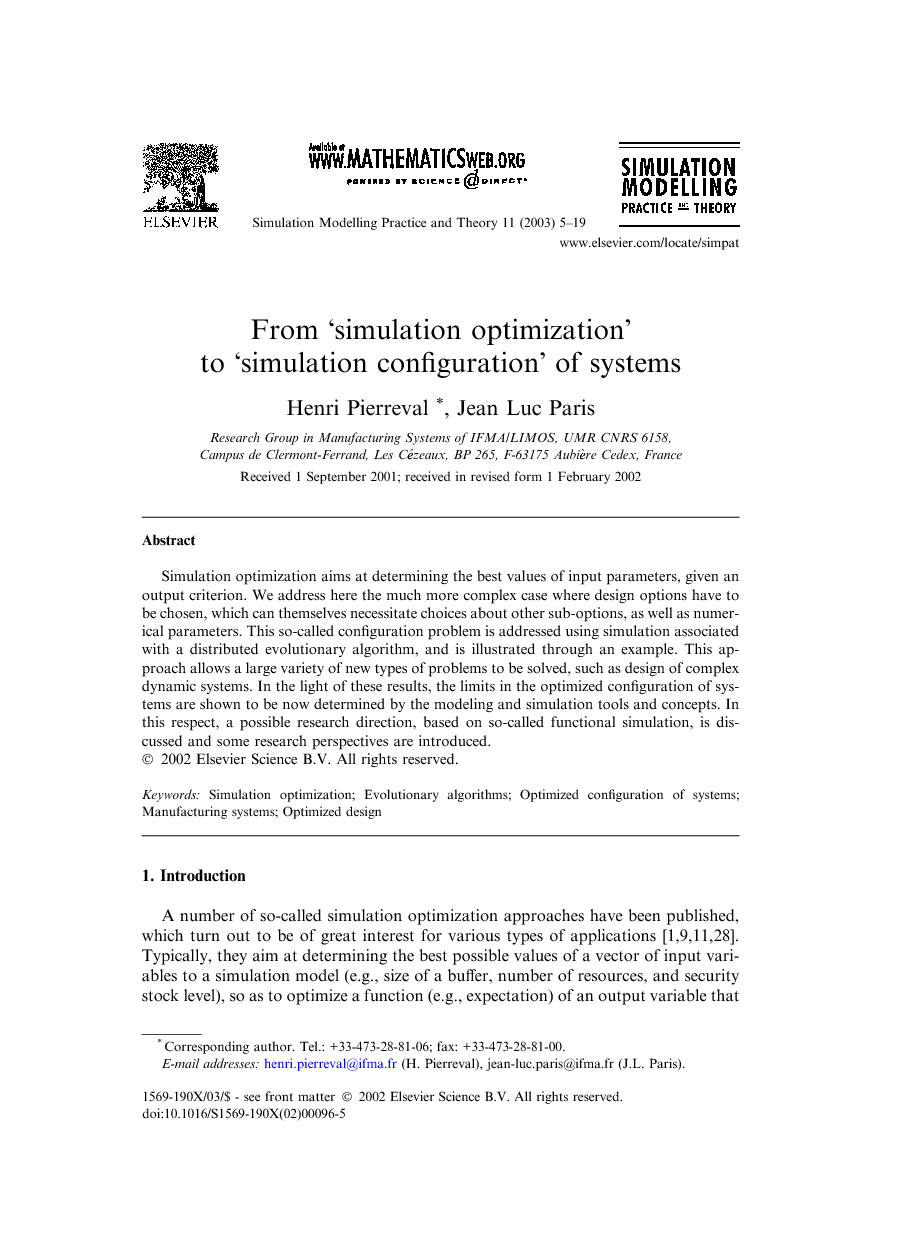 Simulation optimization aims at determining the best values of input parameters, given an output criterion. We address here the much more complex case where design options have to be chosen, which can themselves necessitate choices about other sub-options, as well as numerical parameters. This so-called configuration problem is addressed using simulation associated with a distributed evolutionary algorithm, and is illustrated through an example. This approach allows a large variety of new types of problems to be solved, such as design of complex dynamic systems. In the light of these results, the limits in the optimized configuration of systems are shown to be now determined by the modeling and simulation tools and concepts. In this respect, a possible research direction, based on so-called functional simulation, is discussed and some research perspectives are introduced

A number of so-called simulation optimization approaches have been published, which turn out to be of great interest for various types of applications [1], [9], [11] and [28]. Typically, they aim at determining the best possible values of a vector of input variables to a simulation model (e.g., size of a buffer, number of resources, and security stock level), so as to optimize a function (e.g., expectation) of an output variable that generally represents a performance criterion. The related literature shows that most of these approaches are actually limited to the search of a vector of input parameters (generally numerical) as follows: where f is the output criterion, evaluated through simulation; X=(X1,⋯,Xn) is a vector that belongs to a domain D=⊗Di, where the Dis represent the respective domains of the Xis. Consequently, such approaches cannot handle more complex, but often encountered situations, where the decisions to be made to obtain good system performances do not consists only in finding good parameters, but also in determining a good way to “configure” the system. What is called configuration here refers to the manner in which the different system’s components (sub-systems), will be chosen and put together. It is clear that we are interested here only in the options or in the parameters that can have an effect on the system performances. We will globally refer to these as design options [13] and [37]; each design option can in turn necessitate the choice between sub-options and/or numerical parameters. For example, in the transportation of parts in a manufacturing system, a choice between the options “conveyor” and “automatic guided vehicles” (AGVs) may have to be made. Another example in quality control in a production workshop is to select either option 1: “quality check at each processing stage” or option 2: “quality verification after the final processing stage”. The efficiency of these options can depend on the choice of other sub-options or parameters. This situation is illustrated in Fig. 1, which depicts the case of a production line managed using a pull control strategy based either on Conwip or Kanban [12] If the first option is preferred, only one numerical parameter, namely the number of Conwip cards, has to be determined; for the second option, n cards corresponding to the n control loops, have to be determined. It can be therefore noted that the number of parameters to optimize depends on the options and sub-options selected. The direct use of simulation using a trial and error method can allow several possible configurations to be evaluated. However, this turns out to be impossible in practice if the number of possible combinations of options and sub-options and associated parameters becomes too large. In this article, we first describe an approach to search for optimum configurations using simulation [34]. Note that simulation optimization related to scheduling problems is not considered here [8] and [17]. This approach, based on evolutionary computation, is presented including the principles used, the data structure to represent solutions, and the corresponding evolutionary operators. A simplified example from the area of manufacturing system design illustrates its use. Next, the limitations of this approach are pointed out and the idea of using “functional simulation” paradigms is discussed. Finally, several research perspectives are suggested.

In this article, we have shown that it is possible to go from “only” searching for the best parameters of a system, to searching for the best configuration of a system. In this latter case, the choices are not limited to parameters, but also concern options, which can themselves depend on other sub-options or non-numerical or non-numerical parameters, and so on. Our simple, but difficult example illustrates the great potential of this approach. The use of evolutionary principles facilitates implementation on several processors, in a distributed way. What can be called “simulation configuration” (in analogy with simulation optimization) opens new possibilities in a wide range of application areas, as far as the simulation model can be built in such a way that the possible options and parameters can be dynamically modified. The use of several performance criteria can be contemplated, when compromises have to be determined (e.g., between the amount of works in process and customer service). An example of multicriteria application of evolutionary search is given in [24]. Unfortunately, the limitations of this approach are now in the development of simulation models, which have to provide the capability of switching from one option to another, in a reasonably simple manner. The implementation of such a feature may be facilitated by object oriented and/or hierarchical modeling approaches. Consequently, in view of tackling such difficulties and in terms of related future work, we have introduced the paradigm of “functional simulation” and discussed the main obstacles to its implementation. This direction keeps the door open to research aiming at dealing with simulation projects in a more convenient way, but also aiming at searching for the optimal configuration of systems. In this respect, an interesting issue concerns the management of both knowledge about the design of the system (e.g., what option could be used in what case) and knowledge about its dynamic behavior, in one and the same software package.