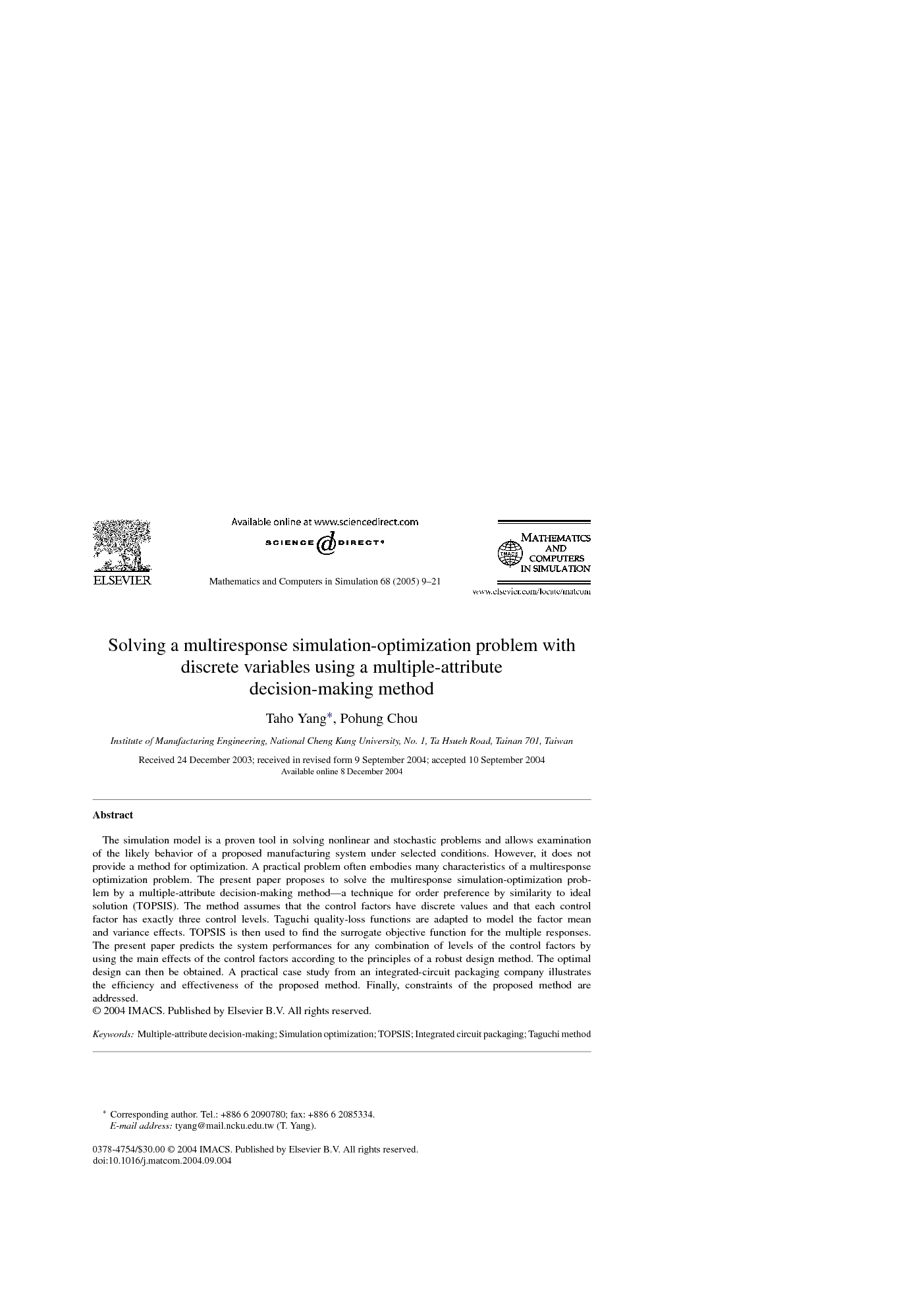 The simulation model is a proven tool in solving nonlinear and stochastic problems and allows examination of the likely behavior of a proposed manufacturing system under selected conditions. However, it does not provide a method for optimization. A practical problem often embodies many characteristics of a multiresponse optimization problem. The present paper proposes to solve the multiresponse simulation-optimization problem by a multiple-attribute decision-making method—a technique for order preference by similarity to ideal solution (TOPSIS). The method assumes that the control factors have discrete values and that each control factor has exactly three control levels. Taguchi quality-loss functions are adapted to model the factor mean and variance effects. TOPSIS is then used to find the surrogate objective function for the multiple responses. The present paper predicts the system performances for any combination of levels of the control factors by using the main effects of the control factors according to the principles of a robust design method. The optimal design can then be obtained. A practical case study from an integrated-circuit packaging company illustrates the efficiency and effectiveness of the proposed method. Finally, constraints of the proposed method are addressed

The simulation model is a proven tool in solving nonlinear and stochastic problems, and allows examination of the likely behavior of a proposed manufacturing system under selected conditions [1]. However, simulation is essentially a trial-and-error approach, and is therefore, time-consuming. It does not provide a method for optimization. There is a significant body of literature devoted to the problem of simulation optimization [2]. To solve a simulation-optimization problem, there are two general approaches—the response surface method (RSM) and the metaheuristic method. The RSM simulation-optimization approach uses a simulation metamodel to suggest a functional relationship between selected decision variables and system responses. It provides a statistical summary of simulation results, allows some extrapolation from the simulated range of system conditions, and therefore, has the potential to offer assistance in optimization [3] and [4]. There are, however, two well-known problems associated with RSM: (i) the steepest descent is scale-dependent and (ii) the step size along the steepest descent path is selected intuitively [5]. Metaheuristics (such as simulated annealing, genetic algorithms, Tabu search, or scatter search) can be used as an embedded search algorithm associated with simulation software for a simulation-optimization problem. The search strategies proposed by metaheuristic methodologies result in iterative-procedures that have the ability to escape local optimal points. Although there is a significant body of literature that addresses single-response optimization problems, practical problems often embody many characteristics of a multiresponse optimization problem. For example, one such practical problem is the maintenance of a satisfactory system throughput while simultaneously maximizing machine utilizations and minimizing the amount of work-in-process [6]. A survey by Khuri [7] showed that most of the existing multiresponse optimization approaches combine multiple responses into a single response by appropriate transformation. The type of transformation differs according to the particular method—and is an arbitrary choice. This arbitrary choice is recognized as being a drawback. Angün et al. [8] proposed to solve the multiresponse problem by choosing one of the responses as objective and treating the remaining responses as constraints. They generalized the estimated steepest-descent search direction to multiple responses. The search direction is the scaled and projected estimated steepest-descent direction—also called the estimated affine scaling search direction. Yang and Tseng [9] used a hybrid RSM and a lexicographical goal-programming approach to solve a multiresponse problem. Their approach satisfied the simulation response in prioritized sequence, rather than solving a complete goal-programming model at each point determined by the RSM procedure. In fact, no goal-programming problem was actually solved in their method. Although there are other variations in modeling the multiresponse simulation-optimization problem, most of them use the descent-search method to find a solution. Myers and Carter [10] introduced the dual-response approach to model the problem with two responses. Their objective was to find the optimal operating settings that optimize a primary response—subject to the condition that a secondary response takes on a desirable value. Del Castillo and Montgomery [11] extended this concept to more than two responses. Their methodology treated all responses, other than the primary response, as constraints. The resulting formulation can be solved by a nonlinear programming solution method. Fan and Del Castillo [12] proposed to solve a dual-response system based on Monte Carlo simulation of the system under study. Their method explicitly considered the sampling variance of the fitted responses. It was applied to solve a Taguchi's parameter-design problem. Their approach used an orthogonal array to collect structured data. Each experimental scenario had some replications that led to sample mean and deviation for each scenario. These data were then used to find the fitted second-order response surfaces for both mean and standard deviation. If the standard deviation response surface and the mean response surface are treated as the objective function and the constraint function, respectively, the problem can then be solved by a nonlinear programming method. It is different from the traditional Taguchi method in that it assumes a bounded continuous solution space for each factor. However, the continuous assumptions might not be viable for a practical constraint. For example, a machine parameter might have only three levels for adjustments. Apart from the above difficulties, the majority of the simulation-optimization literature does not account for the inherent sampling variability of the fitted responses. Azadivar and Lee [13] optimized, by simulation, discrete variable stochastic systems, which are single-response problems with discrete factors. Tong and Su [14] solved a multi-response robust design problem using a multiple-attribute decision-making (MADM) method. They considered the quality loss of each response, and then adopted a MADM method—a technique for order preference by similarity to ideal solution (TOPSIS) to optimize the multi-response robust design problem. Their approach explicitly considered the sampling variability of each response by the Taguchi quality loss function. When all decision variables are subject to only a few viable discrete values and to the inclusion of sampling variability, the simulation-optimization problem becomes a factorial design problem that is similar to Taguchi's parameter-design method. The present research explores the possibility of a hybrid Taguchi method and TOPSIS approach to solve a multiresponse simulation-optimization problem with discrete factors. A practical case study is utilized to illustrate the proposed method. The remainder of this paper is organized as follows: a brief introduction to the case study problem is provided in Section 2. The details of the solution methodology are discussed in Section 3. Section 4 shows the empirical results. Finally, Section 5 presents the conclusions.