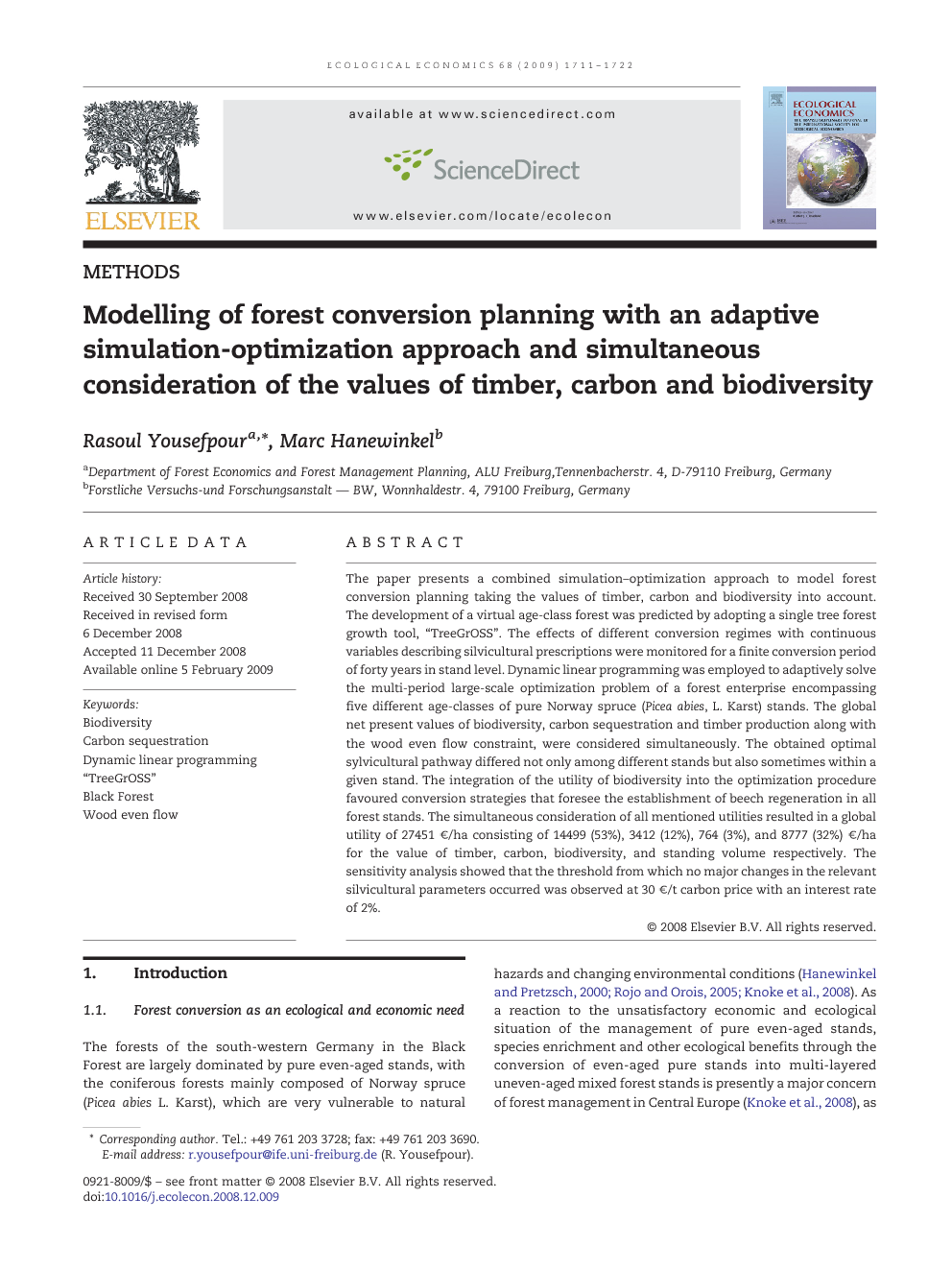 The paper presents a combined simulation–optimization approach to model forest conversion planning taking the values of timber, carbon and biodiversity into account. The development of a virtual age-class forest was predicted by adopting a single tree forest growth tool, “TreeGrOSS”. The effects of different conversion regimes with continuous variables describing silvicultural prescriptions were monitored for a finite conversion period of forty years in stand level. Dynamic linear programming was employed to adaptively solve the multi-period large-scale optimization problem of a forest enterprise encompassing five different age-classes of pure Norway spruce (Picea abies, L. Karst) stands. The global net present values of biodiversity, carbon sequestration and timber production along with the wood even flow constraint, were considered simultaneously. The obtained optimal sylvicultural pathway differed not only among different stands but also sometimes within a given stand. The integration of the utility of biodiversity into the optimization procedure favoured conversion strategies that foresee the establishment of beech regeneration in all forest stands. The simultaneous consideration of all mentioned utilities resulted in a global utility of 27451 €/ha consisting of 14499 (53%), 3412 (12%), 764 (3%), and 8777 (32%) €/ha for the value of timber, carbon, biodiversity, and standing volume respectively. The sensitivity analysis showed that the threshold from which no major changes in the relevant silvicultural parameters occurred was observed at 30 €/t carbon price with an interest rate of 2%

New technical developments such as complex solver platforms (Frontline, 2007) or growth simulators (TreeGrOSS, 2006) are able to support more complex and large-scale forest decision making procedures. If the decision criteria (e. g. the criteria of sustainable forest management) are clearly defined, they can be integrated into modelling and optimization procedures (Kangas and Kuusipalo, 1993). The methodology applied in the present study can result in an adaptive forest management planning regarding other criteria than traditional timber production in stand and forest enterprise level. It has the capability to maximise the global utility of a forest enterprise as the sum of partial utilities of all forest stands and demonstrates the influence of different partial objectives on sylvicutural management prescriptions. Furthermore, the DLP process can lead to a more objective selection of the management variables applied to the growth simulators.