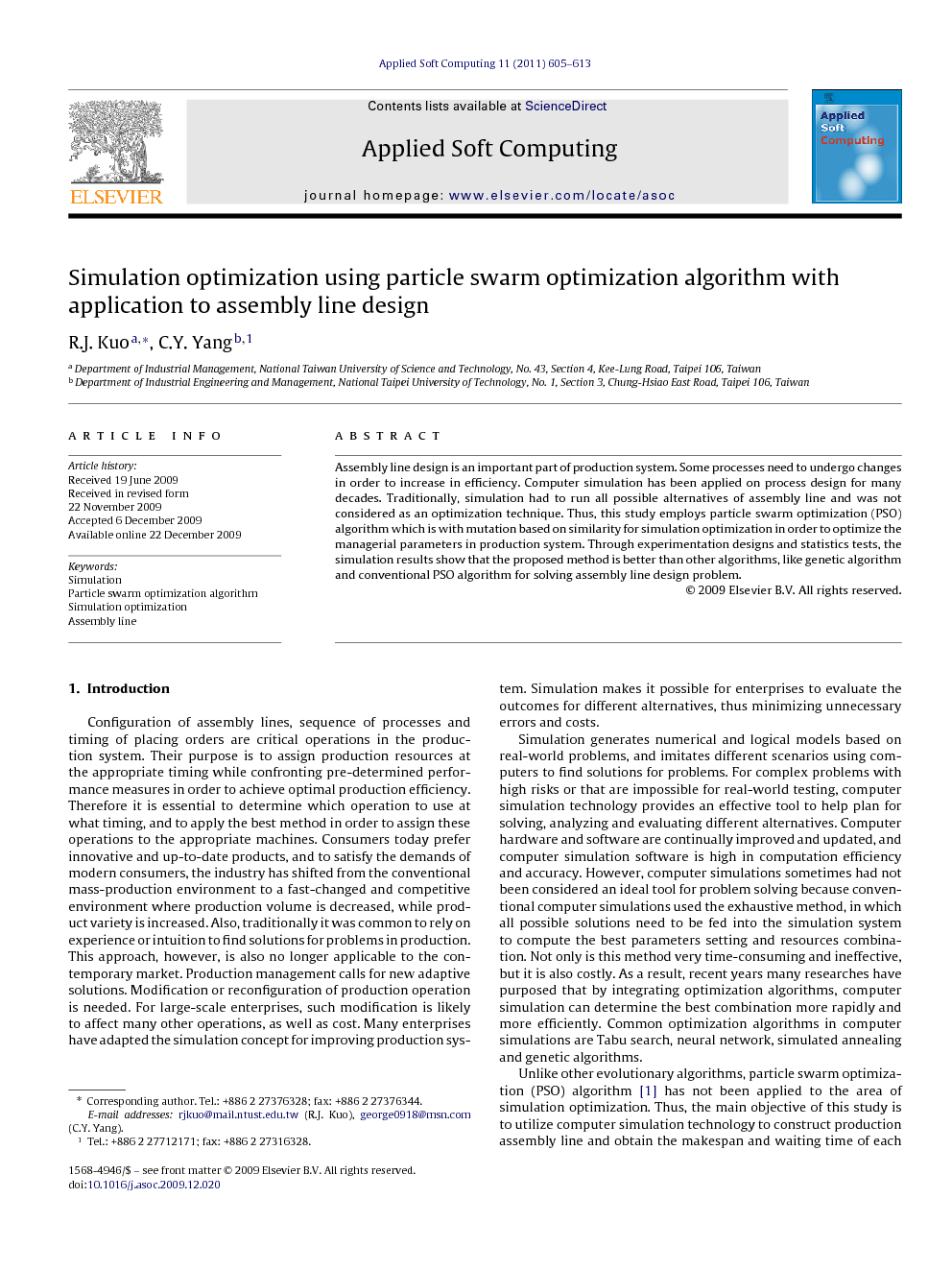 Assembly line design is an important part of production system. Some processes need to undergo changes in order to increase in efficiency. Computer simulation has been applied on process design for many decades. Traditionally, simulation had to run all possible alternatives of assembly line and was not considered as an optimization technique. Thus, this study employs particle swarm optimization (PSO) algorithm which is with mutation based on similarity for simulation optimization in order to optimize the managerial parameters in production system. Through experimentation designs and statistics tests, the simulation results show that the proposed method is better than other algorithms, like genetic algorithm and conventional PSO algorithm for solving assembly line design problem.

Configuration of assembly lines, sequence of processes and timing of placing orders are critical operations in the production system. Their purpose is to assign production resources at the appropriate timing while confronting pre-determined performance measures in order to achieve optimal production efficiency. Therefore it is essential to determine which operation to use at what timing, and to apply the best method in order to assign these operations to the appropriate machines. Consumers today prefer innovative and up-to-date products, and to satisfy the demands of modern consumers, the industry has shifted from the conventional mass-production environment to a fast-changed and competitive environment where production volume is decreased, while product variety is increased. Also, traditionally it was common to rely on experience or intuition to find solutions for problems in production. This approach, however, is also no longer applicable to the contemporary market. Production management calls for new adaptive solutions. Modification or reconfiguration of production operation is needed. For large-scale enterprises, such modification is likely to affect many other operations, as well as cost. Many enterprises have adapted the simulation concept for improving production system. Simulation makes it possible for enterprises to evaluate the outcomes for different alternatives, thus minimizing unnecessary errors and costs. Simulation generates numerical and logical models based on real-world problems, and imitates different scenarios using computers to find solutions for problems. For complex problems with high risks or that are impossible for real-world testing, computer simulation technology provides an effective tool to help plan for solving, analyzing and evaluating different alternatives. Computer hardware and software are continually improved and updated, and computer simulation software is high in computation efficiency and accuracy. However, computer simulations sometimes had not been considered an ideal tool for problem solving because conventional computer simulations used the exhaustive method, in which all possible solutions need to be fed into the simulation system to compute the best parameters setting and resources combination. Not only is this method very time-consuming and ineffective, but it is also costly. As a result, recent years many researches have purposed that by integrating optimization algorithms, computer simulation can determine the best combination more rapidly and more efficiently. Common optimization algorithms in computer simulations are Tabu search, neural network, simulated annealing and genetic algorithms. Unlike other evolutionary algorithms, particle swarm optimization (PSO) algorithm [1] has not been applied to the area of simulation optimization. Thus, the main objective of this study is to utilize computer simulation technology to construct production assembly line and obtain the makespan and waiting time of each product, to use PSO algorithm in computer simulation system, and to use this simulation system as the fitness function of the algorithm. The PSO algorithm used is with mutation based on similarity (PSOMS) [2]. The concept of PSOMS is based on similarity between the particle and the current global best particle in the swarm. And the collectivity was used to randomly mutate the position of the particles, maintaining swarm diversity in the search space. In order to verify the validity of PSOMS in simulation optimization, the problem from Fontanili et al. [3] is adopted. For the purpose of comparison, three other algorithms, conventional PSO algorithms and two different types of genetic algorithms [3] are also employed to solve the simulation model. The rest of the paper is organized as follows: Section 2 presents the backgrounds of this study. Section 3 proposes a particle swarm-based simulation method for production line, while the simulation results are shown in Section 4. Finally, the concluding remarks are made in Section 5.

After validation and evaluation of modules, among the four algorithms, PSOMS, PSO, GA-Type1 and GA-Type2, PSOMS has been found to have the best problem-solving effect. PSOMS is an algorithm developed by modifying PSO, the difference being that PSOMS has the additional mutation mechanism. Not only does mutation eliminate the tendency to be constrained to local solutions, which is one of the drawbacks of PSO algorithm, it also has the PSO algorithm trait of rapid convergence. The final test also has proved that PSOMS indeed is superior to the other three alternatives. This study focuses on product processing and waiting time cost, therefore does not account for the possible loss in cost involved in workstations. In the future, however, turnoff time of workstations can also be taken into account as an evaluation guideline. In addition, real-world settings, for instance uncertainty factors, can gradually be inputted into simulation system according to the following procedures. Lastly, the subject of discussion of this research is the control variables of assembly line, while facilities and configuration of production module are fixed. Prospective studies can consider increasing or decreasing, or repositioning workstations.