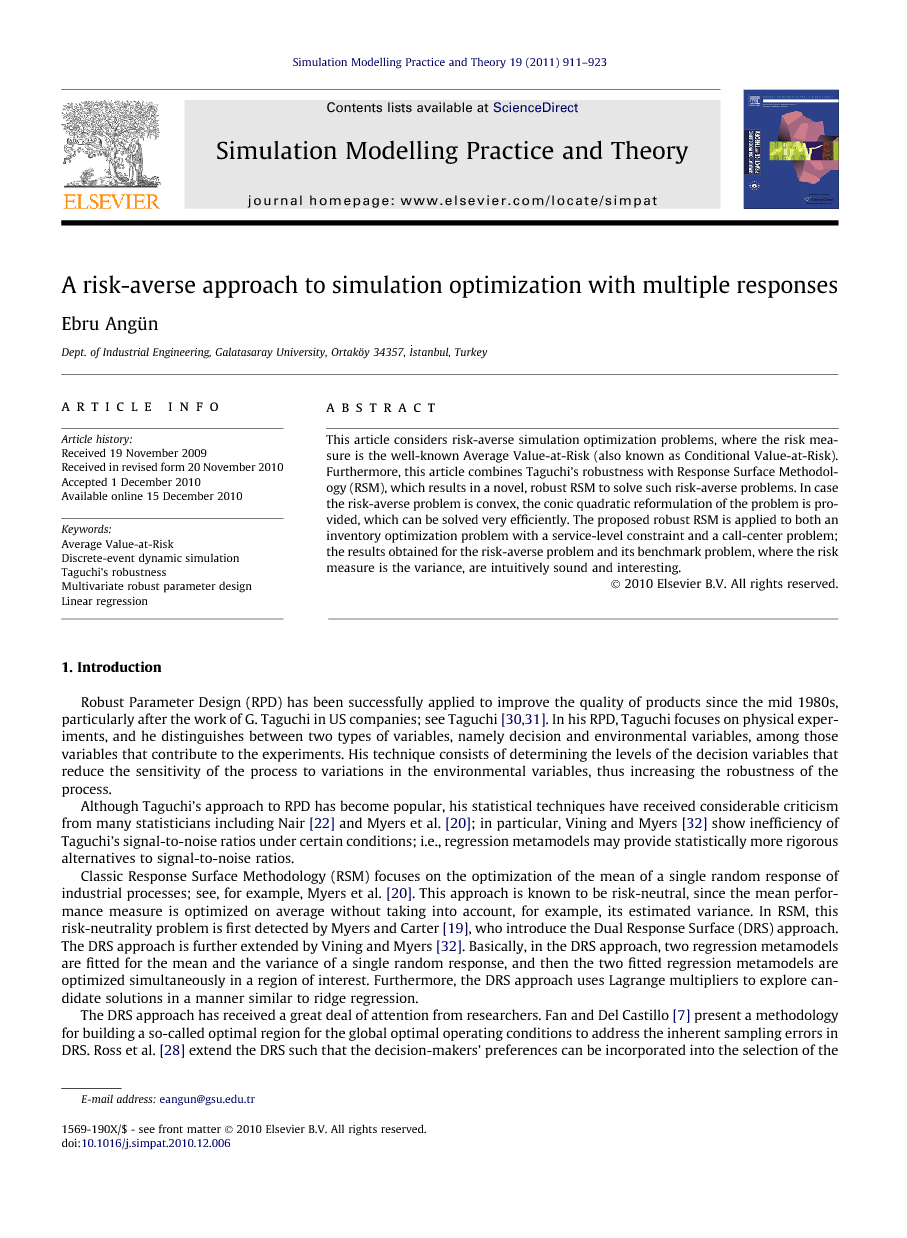 This article considers risk-averse simulation optimization problems, where the risk measure is the well-known Average Value-at-Risk (also known as Conditional Value-at-Risk). Furthermore, this article combines Taguchi’s robustness with Response Surface Methodology (RSM), which results in a novel, robust RSM to solve such risk-averse problems. In case the risk-averse problem is convex, the conic quadratic reformulation of the problem is provided, which can be solved very efficiently. The proposed robust RSM is applied to both an inventory optimization problem with a service-level constraint and a call-center problem; the results obtained for the risk-averse problem and its benchmark problem, where the risk measure is the variance, are intuitively sound and interesting.

Robust Parameter Design (RPD) has been successfully applied to improve the quality of products since the mid 1980s, particularly after the work of G. Taguchi in US companies; see Taguchi [30] and [31]. In his RPD, Taguchi focuses on physical experiments, and he distinguishes between two types of variables, namely decision and environmental variables, among those variables that contribute to the experiments. His technique consists of determining the levels of the decision variables that reduce the sensitivity of the process to variations in the environmental variables, thus increasing the robustness of the process. Although Taguchi’s approach to RPD has become popular, his statistical techniques have received considerable criticism from many statisticians including Nair [22] and Myers et al. [20]; in particular, Vining and Myers [32] show inefficiency of Taguchi’s signal-to-noise ratios under certain conditions; i.e., regression metamodels may provide statistically more rigorous alternatives to signal-to-noise ratios. Classic Response Surface Methodology (RSM) focuses on the optimization of the mean of a single random response of industrial processes; see, for example, Myers et al. [20]. This approach is known to be risk-neutral, since the mean performance measure is optimized on average without taking into account, for example, its estimated variance. In RSM, this risk-neutrality problem is first detected by Myers and Carter [19], who introduce the Dual Response Surface (DRS) approach. The DRS approach is further extended by Vining and Myers [32]. Basically, in the DRS approach, two regression metamodels are fitted for the mean and the variance of a single random response, and then the two fitted regression metamodels are optimized simultaneously in a region of interest. Furthermore, the DRS approach uses Lagrange multipliers to explore candidate solutions in a manner similar to ridge regression. The DRS approach has received a great deal of attention from researchers. Fan and Del Castillo [7] present a methodology for building a so-called optimal region for the global optimal operating conditions to address the inherent sampling errors in DRS. Ross et al. [28] extend the DRS such that the decision-makers’ preferences can be incorporated into the selection of the Lagrange multipliers. Myers et al. [21] consider a general DRS in which the performance measure is a nonnormal response. Rajagopal et al. [24] provide a Bayesian approach to DRS. Lee and Park [17] obtain the robust optimal operating conditions using both fully and partially observed real-life data. Lee et al. [18] construct a robust design model which is resistant to contaminated data and to departures from the normality, and Köksoy and Yalcinoz [16] use a genetic algorithm with arithmetic crossover to solve their DRS problem. Classic RPD assumes physical experiments. Then, experimental designs have been devised for physical settings, but in practical situations environmental variables are difficult, if not impossible, to control. Thus only a few of them, and with few levels, are usually included in the design. Recently, Dellino et al. [4] extend the robust RSM in Myers et al. [20] in many directions including the use of simulation outputs. This is an important contribution since simulation experiments enable the exploration of many values for the decision and environmental variables, and many combinations of these values. Therefore, the major purpose of this article is to contribute to the robust RSM methodology in Dellino et al. [4] in the following three directions: • Dellino et al. [4] have a mean-risk approach where they consider standard deviation as their risk measure. The standard deviation (and variance), however, considers both the upper and lower deviations from the mean, whereas in many cases only one-sided deviation is important; see Yin et al. [34]. Hence, this article replaces the standard deviation by the Average Value-at-Risk (also known as the Conditional Value-at-Risk) from the financial engineering literature, which is known to consider only one-sided deviations. Furthermore, variance is considered as the risk measure of the benchmark problem. • Dellino et al. [4] solve their risk-averse problem through MATLAB’s fmincon function without investigating its convexity. This article, however, provides a very practical way to check for the convexity. Furthermore, in case the risk-averse problem is found to be convex, it provides a conic quadratic reformulation, which can then be solved very efficiently through, for example, CVX (a free-of-charge, structured convex programming solver). • Dellino et al. [4] consider deterministic simulation whereas this article considers discrete-event dynamic (and hence stochastic) simulation. The use of stochastic simulation enables to observe many times the outputs of the multiple responses at the same input combinations through replicates, which is not meaningful for deterministic simulation. This is important since the average outputs of the multiple responses follow asymptotically a multivariate normal distribution because of the classic Central Limit Theorem, provided that the multiple responses have finite variances. The proposed robust RSM is applied to the problem with the Average Value-at-Risk as its risk measure and the benchmark problem with variance as its risk measure on two classic cases, namely an (s, S) inventory optimization case with a service-level constraint and a call-center case, which are originally investigated by Bashyam and Fu [2] and Kelton et al. [11], respectively. The remainder of this article is organized as follows. Section 2 introduces the problem formulation which considers Average Value-at-Risk as its risk measure. Section 3 presents the steps of the robust RSM; the emphasis in this section is on the optimization step where the benchmark problem and the conic quadratic reformulation are introduced. Section 4 gives numerical results of the risk-averse problem with the Average Value-at-Risk and its benchmark on the inventory optimization and the call-center optimization. Section 5 gives conclusions and possible future research directions.

This article extends the risk-averse formulation and the robust RSM introduced in Dellino et al. [4] in the following three directions: (i) in the risk-averse formulation, this article uses the Average Value-at-Risk as the risk measure instead of the standard deviation in Dellino et al. [4]. The Average Value-at-Risk is a one-sided risk measure, which considers only the upside deviation as risky in a minimization problem. Hence, in case the expected total cost is minimized, it may be a more appropriate risk measure than the standard deviation, which considers both the upside and downside deviations from the mean as important. (ii) In the optimization step of the robust RSM, a practical way of checking for the convexity of the risk-averse problem is explained, and in case this problem is found to be convex, its conic quadratic reformulation is provided. Also, the problem where the variance is considered as the risk measure (the benchmark problem) and its conic quadratic reformulation are presented in the optimization step. These conic quadratic programming problems can be optimized through CVX, which is a free-of-charge software for structured convex programming, much more efficiently than MATLAB’s fmincon function used by Dellino et al. [4]. (iii) The proposed robust RSM considers discrete-event dynamic (hence, stochastic) simulation instead of deterministic simulation in Dellino et al. [4]. Stochastic simulation enables to obtain large number of replicates of multiple random responses at the same scenario through the use of non-overlapping PRNs. Then, under fairly general conditions, the averages of these multiple responses have a multivariate normal distribution, which further enables to use classic statistical tests. Hence, to apply the proposed RSM in this article, normality assumption is not required on the random responses or environmental variables if these random responses are estimated through long-run averages of the simulation outputs. The proposed robust RSM is applied to an (s, S) inventory optimization with a service-level constraint and a call-center, where these problems are formulated by using the Average Value-at-Risk (problem with AV@R) and variance as the risk measures. For the inventory case, neither of the risk measures is found preferable to the other whereas for the call-center problem, the benchmark problem gives preferable results to the problem with AV@R. Furthermore, in both cases, the estimated optimal values of the decision variables are found to be not very sensitive to the environments; different environments, however, do give different estimated optimal costs. These numerical studies are repeated for three different values of the risk-aversion parameter, and the solutions are intuitively justifiable. Future research may address the following issues. The simple second-order regression metamodels may be replaced by Kriging metamodels in the problem with AV@R and its benchmark problem; Dellino et al. [5] already use Kriging metamodels in their mean-risk approach, where they use standard deviation as their risk measure. Alternative one-sided risk measures such as semi-variance, absolute mean semi-deviation may be used instead of the Average Value-at-Risk. The risk involving the constraints may be considered. Based on Neumaier et al. [23], a detailed study for the selection of global optimization solvers may be done, and then a proper comparison of the robust RSM with OptQuest may be performed.