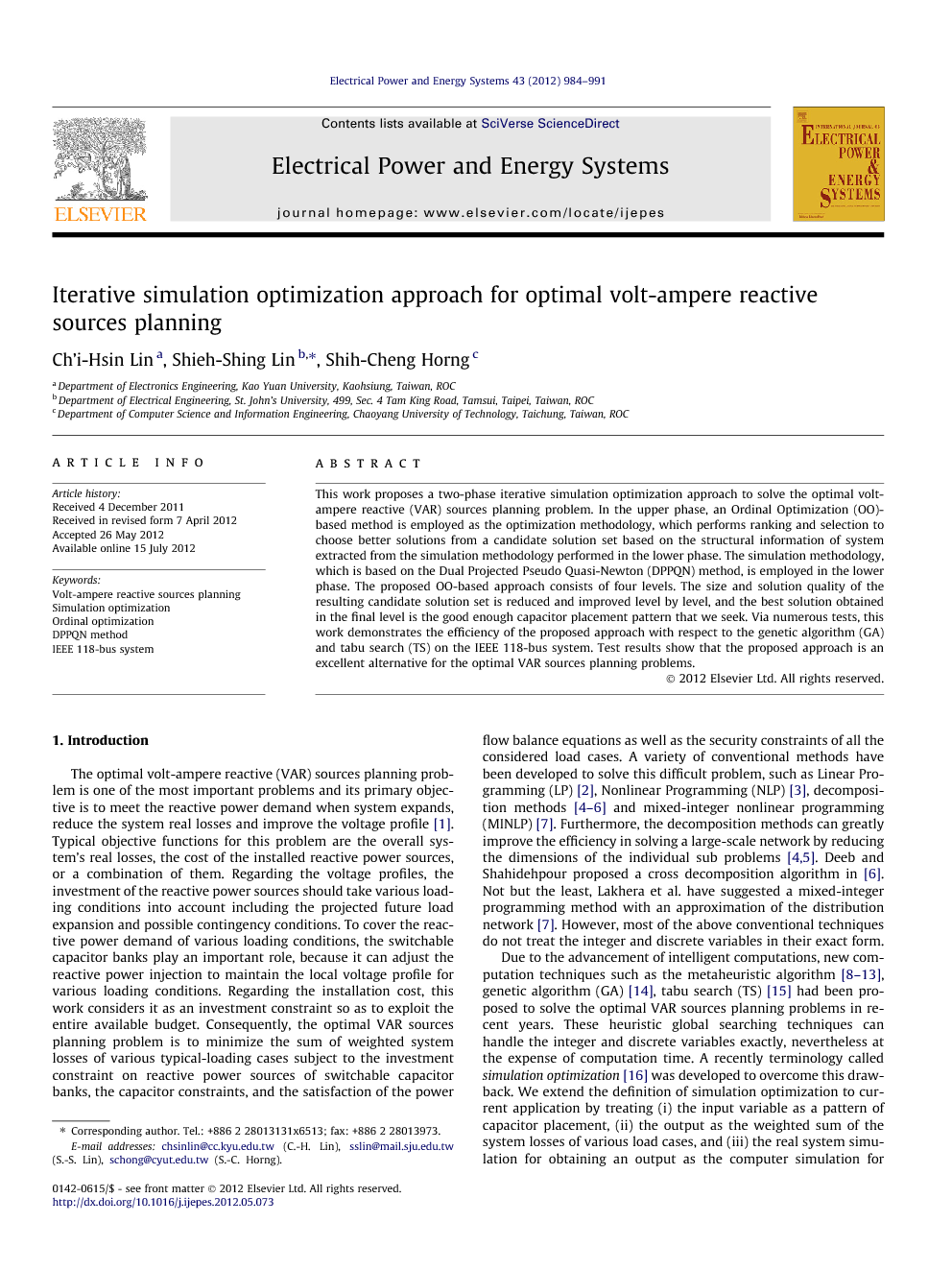 This work proposes a two-phase iterative simulation optimization approach to solve the optimal volt-ampere reactive (VAR) sources planning problem. In the upper phase, an Ordinal Optimization (OO)-based method is employed as the optimization methodology, which performs ranking and selection to choose better solutions from a candidate solution set based on the structural information of system extracted from the simulation methodology performed in the lower phase. The simulation methodology, which is based on the Dual Projected Pseudo Quasi-Newton (DPPQN) method, is employed in the lower phase. The proposed OO-based approach consists of four levels. The size and solution quality of the resulting candidate solution set is reduced and improved level by level, and the best solution obtained in the final level is the good enough capacitor placement pattern that we seek. Via numerous tests, this work demonstrates the efficiency of the proposed approach with respect to the genetic algorithm (GA) and tabu search (TS) on the IEEE 118-bus system. Test results show that the proposed approach is an excellent alternative for the optimal VAR sources planning problems.

The optimal volt-ampere reactive (VAR) sources planning problem is one of the most important problems and its primary objective is to meet the reactive power demand when system expands, reduce the system real losses and improve the voltage profile [1]. Typical objective functions for this problem are the overall system’s real losses, the cost of the installed reactive power sources, or a combination of them. Regarding the voltage profiles, the investment of the reactive power sources should take various loading conditions into account including the projected future load expansion and possible contingency conditions. To cover the reactive power demand of various loading conditions, the switchable capacitor banks play an important role, because it can adjust the reactive power injection to maintain the local voltage profile for various loading conditions. Regarding the installation cost, this work considers it as an investment constraint so as to exploit the entire available budget. Consequently, the optimal VAR sources planning problem is to minimize the sum of weighted system losses of various typical-loading cases subject to the investment constraint on reactive power sources of switchable capacitor banks, the capacitor constraints, and the satisfaction of the power flow balance equations as well as the security constraints of all the considered load cases. A variety of conventional methods have been developed to solve this difficult problem, such as Linear Programming (LP) [2], Nonlinear Programming (NLP) [3], decomposition methods [4], [5] and [6] and mixed-integer nonlinear programming (MINLP) [7]. Furthermore, the decomposition methods can greatly improve the efficiency in solving a large-scale network by reducing the dimensions of the individual sub problems [4] and [5]. Deeb and Shahidehpour proposed a cross decomposition algorithm in [6]. Not but the least, Lakhera et al. have suggested a mixed-integer programming method with an approximation of the distribution network [7]. However, most of the above conventional techniques do not treat the integer and discrete variables in their exact form. Due to the advancement of intelligent computations, new computation techniques such as the metaheuristic algorithm [8], [9], [10], [11], [12] and [13], genetic algorithm (GA) [14], tabu search (TS) [15] had been proposed to solve the optimal VAR sources planning problems in recent years. These heuristic global searching techniques can handle the integer and discrete variables exactly, nevertheless at the expense of computation time. A recently terminology called simulation optimization[16] was developed to overcome this drawback. We extend the definition of simulation optimization to current application by treating (i) the input variable as a pattern of capacitor placement, (ii) the output as the weighted sum of the system losses of various load cases, and (iii) the real system simulation for obtaining an output as the computer simulation for solving the considered problem. Thus, using an effective simulation optimization approach to solve the large-dimension optimal VAR sources planning problem of multiple load cases with coupling inequality constraints and involving integer and discrete variables is the purpose of this paper. To achieve this goal, a two-phase iterative simulation optimization approach is proposed. An Ordinal Optimization (OO)-based method is used as our optimization scheme in the upper case, and an efficient algorithm based on the Dual Projected Pseudo Quasi-Newton (DPPQN) method [17] and [18] is utilized as our simulation tool in the lower case. The main contributions of this work include: (i) a new model for the optimal VAR sources planning problem from very rough to exact ones, (ii) each model induces a different continuous-variable optimal power flow (OPF) to be solved, and (iii) structural information of system extracted from lower phase help the upper phase to select better solutions from the candidate solution set. This paper is organized as follows. The mathematical formulation of the VAR sources planning with multiple load cases is presented in Section 2. Section 3 presents the background and procedures of the OO-based method. In Section 4, the proposed OO-based method is implemented and tested on the IEEE 118-bus system, and the computational efficiency and the quality of the obtained solution are compared with those obtained by GA and TS. Finally, a conclusion is given in Section 5.

In this paper, the proposed OO-based method to solve the optimal VAR sources planning problems was originality in this area. There were some special features in the proposed approach: (i) in each of the four levels, this paper employ a new model for the optimal VAR sources planning problem from very rough to exact ones, (ii) each model induces a different continuous-variable OPF to be solved, and (iii) the theoretical complicacy and refinement of using structural information of system extracted from lower phase help the OO-based method (upper phase) to select better solutions from the candidate solution set. Through numerous tests, this paper demonstrated the computational efficiency and the quality of the obtained good enough solution of the proposed approach with respect to Genetic Algorithm (GA) and Tabu Search (TS), when GA and TS consume around 150 times of the CPU time consumed by the proposed approach, their best so far objective values on average are still 43.87% and 79.77% more than the objective values obtained by the proposed approach. In addition, this efficient simulation optimization approach is not limited to the IEEE 118-bus systems and can be used in any other more complicated large-scale test systems. In the further researches, we will employ the parallel processing technique, especially within asynchronous computing environments to solve the more complicated large-scale test systems.