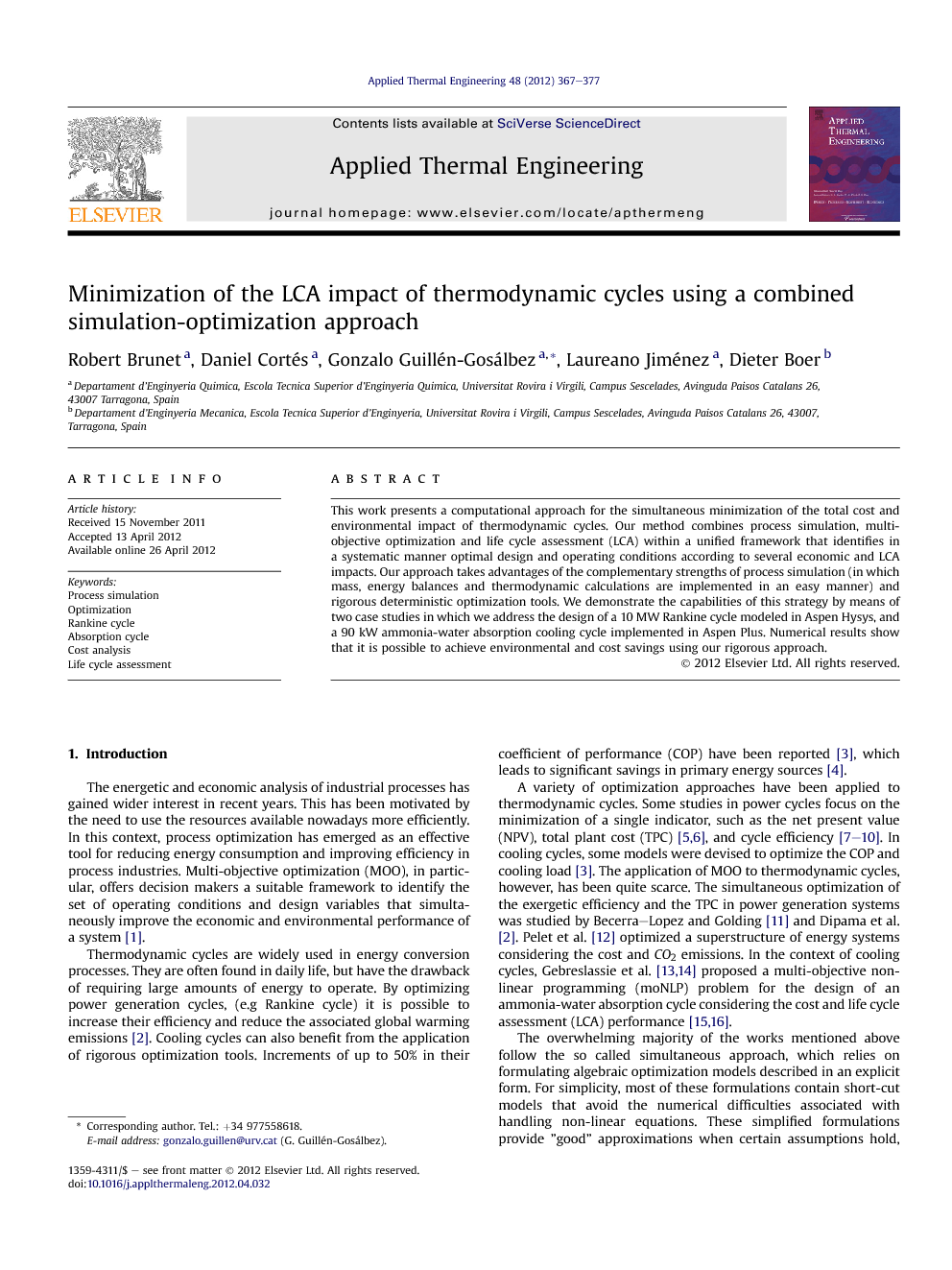 This work presents a computational approach for the simultaneous minimization of the total cost and environmental impact of thermodynamic cycles. Our method combines process simulation, multi-objective optimization and life cycle assessment (LCA) within a unified framework that identifies in a systematic manner optimal design and operating conditions according to several economic and LCA impacts. Our approach takes advantages of the complementary strengths of process simulation (in which mass, energy balances and thermodynamic calculations are implemented in an easy manner) and rigorous deterministic optimization tools. We demonstrate the capabilities of this strategy by means of two case studies in which we address the design of a 10 MW Rankine cycle modeled in Aspen Hysys, and a 90 kW ammonia-water absorption cooling cycle implemented in Aspen Plus. Numerical results show that it is possible to achieve environmental and cost savings using our rigorous approach.

The energetic and economic analysis of industrial processes has gained wider interest in recent years. This has been motivated by the need to use the resources available nowadays more efficiently. In this context, process optimization has emerged as an effective tool for reducing energy consumption and improving efficiency in process industries. Multi-objective optimization (MOO), in particular, offers decision makers a suitable framework to identify the set of operating conditions and design variables that simultaneously improve the economic and environmental performance of a system [1]. Thermodynamic cycles are widely used in energy conversion processes. They are often found in daily life, but have the drawback of requiring large amounts of energy to operate. By optimizing power generation cycles, (e.g Rankine cycle) it is possible to increase their efficiency and reduce the associated global warming emissions [2]. Cooling cycles can also benefit from the application of rigorous optimization tools. Increments of up to 50% in their coefficient of performance (COP) have been reported [3], which leads to significant savings in primary energy sources [4]. A variety of optimization approaches have been applied to thermodynamic cycles. Some studies in power cycles focus on the minimization of a single indicator, such as the net present value (NPV), total plant cost (TPC) [5] and [6], and cycle efficiency [7], [8], [9] and [10]. In cooling cycles, some models were devised to optimize the COP and cooling load [3]. The application of MOO to thermodynamic cycles, however, has been quite scarce. The simultaneous optimization of the exergetic efficiency and the TPC in power generation systems was studied by Becerra–Lopez and Golding [11] and Dipama et al. [2]. Pelet et al. [12] optimized a superstructure of energy systems considering the cost and CO2 emissions. In the context of cooling cycles, Gebreslassie et al. [13] and [14] proposed a multi-objective non-linear programming (moNLP) problem for the design of an ammonia-water absorption cycle considering the cost and life cycle assessment (LCA) performance [15] and [16]. The overwhelming majority of the works mentioned above follow the so called simultaneous approach, which relies on formulating algebraic optimization models described in an explicit form. For simplicity, most of these formulations contain short-cut models that avoid the numerical difficulties associated with handling non-linear equations. These simplified formulations provide ”good” approximations when certain assumptions hold, but can lead to large numerical errors otherwise. Sequential process simulation models are more difficult to optimize due to the presence of non-convexities of different types, but have the advantage of producing more accurate results. Another limitation of the works mentioned above is that those that account for environmental concerns restrict the analysis to a single environmental indicator, neglecting the effects caused in other environmental damages. This work applies a combined approach for the design of thermodynamic cycles that takes advantage of the complementary strengths of sequential modular process simulators (e.g. Aspen Hysys and Aspen Plus), optimization tools (e.g. SNOPT and CPLEX) and LCA. The pivotal idea of our method is to optimize modular simulation models of thermodynamic cycles using an external deterministic optimizer that is guaranteed to converge to an optimal solution. Our approach is inspired by other simulation-optimization methods used in a variety of chemical engineering applications, including the design of systems such as: heat exchangers and chemical reactions [17], [18] and [19], chemical plants [20] and [21], distillation columns [22], and biotechnological processes [23]. An efficient solution method is presented for tackling these problems based on decomposing them into two sub-levels between which an algorithm iterates until a stopping criterion is satisfied. This algorithm performs the calculations using both a process simulation and an external optimizer. The final goal of our analysis is to identify the design and operating conditions of different thermodynamic cycles that simultaneously minimize the total annualized cost (TAC) and environmental impact (EI). We demonstrate the capabilities of this methodology through its application to the design of two cycles: a steam Rankine cycle and an ammonia-water absorption cycle. The optimization of the steam Rankine cycle is formulated as a moNLP problem, which is optimized with a Successive Quadratic Programming (SQP) solver that interacts at each iteration with the process simulator of choice. The optimization of the absorption cycle gives rise to a multi-objective mixed-integer non-linear programming (moMINLP) problem, in which binary variables are employed to model the number of trays in the desorber.

This work has introduced a computational approach for the optimal design of thermodynamic cycles considering economic and environmental concerns. Our approach combines simulation packages with rigorous deterministic mathematical programming tools and LCA analysis. The capabilities of this approach were tested in two thermodynamic cycles: a steam power cycle and an ammonia-water absorption cooling cycle, for which we minimized the total annualized cost and a set of environmental impacts measured in three LCA damage categories. Numerical results showed that the environmental performance of thermodynamic cycles can be improved by compromising their economic performance. We also found that the main contribution to the total impact is the operation phase. The optimization of the individual damage categories produces similar results, indicating redundancies between them.