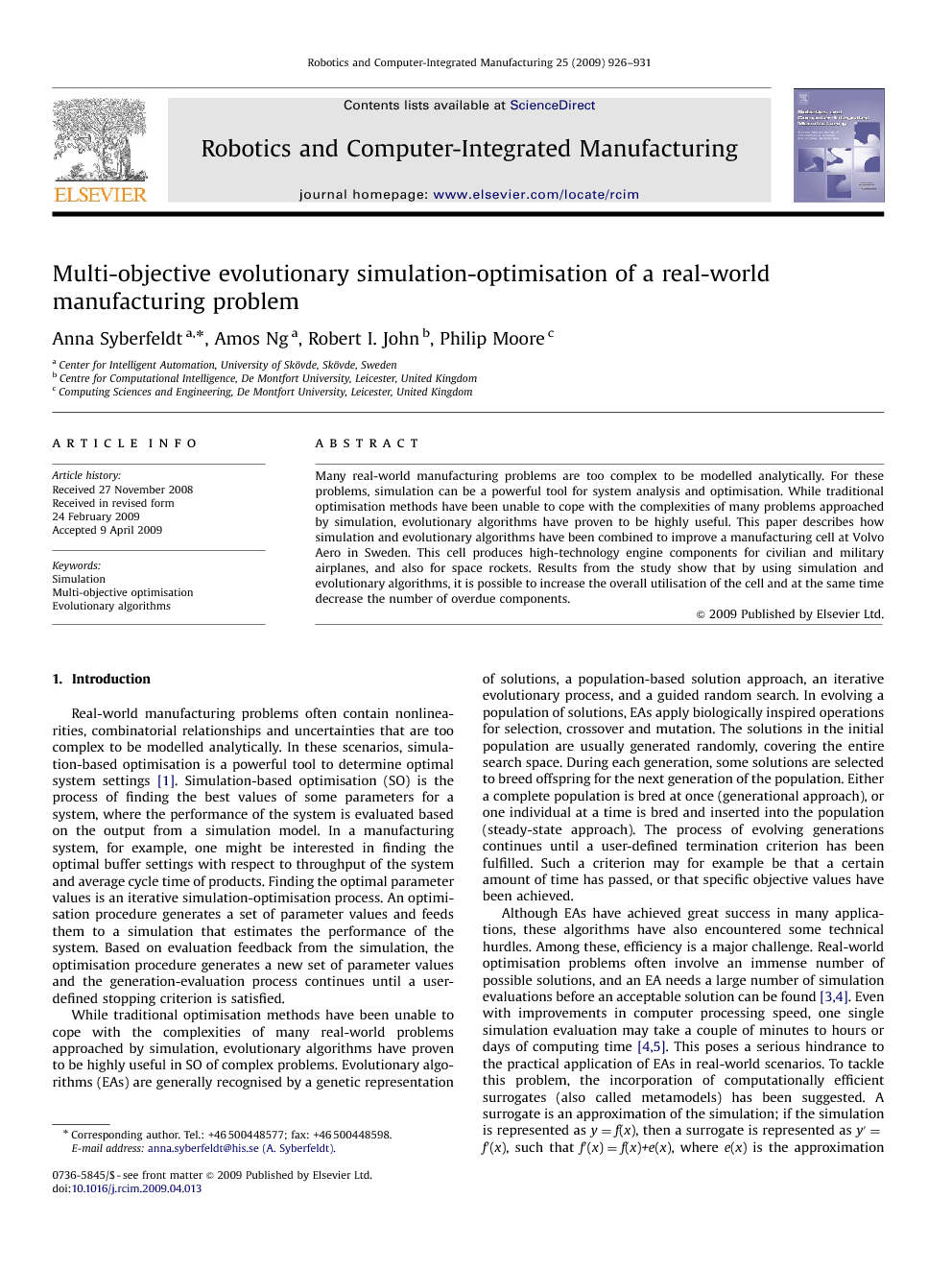 Many real-world manufacturing problems are too complex to be modelled analytically. For these problems, simulation can be a powerful tool for system analysis and optimisation. While traditional optimisation methods have been unable to cope with the complexities of many problems approached by simulation, evolutionary algorithms have proven to be highly useful. This paper describes how simulation and evolutionary algorithms have been combined to improve a manufacturing cell at Volvo Aero in Sweden. This cell produces high-technology engine components for civilian and military airplanes, and also for space rockets. Results from the study show that by using simulation and evolutionary algorithms, it is possible to increase the overall utilisation of the cell and at the same time decrease the number of overdue components.

Real-world manufacturing problems often contain nonlinearities, combinatorial relationships and uncertainties that are too complex to be modelled analytically. In these scenarios, simulation-based optimisation is a powerful tool to determine optimal system settings [1]. Simulation-based optimisation (SO) is the process of finding the best values of some parameters for a system, where the performance of the system is evaluated based on the output from a simulation model. In a manufacturing system, for example, one might be interested in finding the optimal buffer settings with respect to throughput of the system and average cycle time of products. Finding the optimal parameter values is an iterative simulation-optimisation process. An optimisation procedure generates a set of parameter values and feeds them to a simulation that estimates the performance of the system. Based on evaluation feedback from the simulation, the optimisation procedure generates a new set of parameter values and the generation-evaluation process continues until a user-defined stopping criterion is satisfied. While traditional optimisation methods have been unable to cope with the complexities of many real-world problems approached by simulation, evolutionary algorithms have proven to be highly useful in SO of complex problems. Evolutionary algorithms (EAs) are generally recognised by a genetic representation of solutions, a population-based solution approach, an iterative evolutionary process, and a guided random search. In evolving a population of solutions, EAs apply biologically inspired operations for selection, crossover and mutation. The solutions in the initial population are usually generated randomly, covering the entire search space. During each generation, some solutions are selected to breed offspring for the next generation of the population. Either a complete population is bred at once (generational approach), or one individual at a time is bred and inserted into the population (steady-state approach). The process of evolving generations continues until a user-defined termination criterion has been fulfilled. Such a criterion may for example be that a certain amount of time has passed, or that specific objective values have been achieved. Although EAs have achieved great success in many applications, these algorithms have also encountered some technical hurdles. Among these, efficiency is a major challenge. Real-world optimisation problems often involve an immense number of possible solutions, and an EA needs a large number of simulation evaluations before an acceptable solution can be found [3] and [4]. Even with improvements in computer processing speed, one single simulation evaluation may take a couple of minutes to hours or days of computing time [4] and [5]. This poses a serious hindrance to the practical application of EAs in real-world scenarios. To tackle this problem, the incorporation of computationally efficient surrogates (also called metamodels) has been suggested. A surrogate is an approximation of the simulation; if the simulation is represented as y=f(x), then a surrogate is represented as y′=f′(x), such that f′(x)=f(x)+e(x), where e(x) is the approximation error. For constructing surrogates, a variety of different techniques have been proposed. Among the most popular in evolutionary optimisation is artificial neural networks (ANNs). In general terms, ANN is a non-linear statistical data modelling method used to model complex relationships between inputs and outputs [6]. Originally, the inspiration for the technique was from the area of neuroscience and the study of neurons as information processing elements in the central nervous system. ANNs have universal approximation characteristics and the ability to adapt to changes through training. Instead of only following a set of rules, ANNs are able to learn underlying relationships between inputs and outputs from a collection of training examples, and to generalise these relationships to previously unseen data. These attributes make ANNs very suitable to be used as surrogates for computationally expensive simulation models. However, due to lack of data and high complexity of many problems, surrogates often suffer from false optima [7]. A surrogate can therefore not completely replace the simulation, but the simulation and the surrogate must be used in conjunction during the optimisation. This paper describes the use of ANNs and EAs in optimising a manufacturing cell at Volvo Aero in Sweden. Similar to other manufacturing companies, Volvo Aero continuously strives for competitiveness and cost-reduction, and it is therefore important that the cell is operated as efficient as possible. To allow testing and analysis of different production set-ups in the cell, a simulation model has been developed. Experimenting on the real system is not possible; it is not only impractical but also extremely costly. In the next section, both the cell and the simulation model are further described. In Section 2, the approach used to tackle the multiple objectives involved in optimising the cell is presented. Section 3 describes the evolutionary algorithm used in the optimisation, followed by a presentation of the results in Section 5. A summary of the paper and future work are presented in Section 6.

This paper describes the application of an evolutionary algorithm in simulation-based optimisation of a manufacturing cell at Volvo Aero in Sweden. In the cell, components for aircraft and gas turbine engines are processed, and the aim of the study is to improve the processing by increasing the utilisation of the cell while at the same time decrease the number of overdue components. The two objectives of increased utilisation and decreased tardiness are conflicting; improving performance on one of them deteriorates performance of the other. To handle this problem, the concept of multi-objective Pareto-optimisation is adopted in the evolutionary algorithm. For reduced time consumption, the evolutionary algorithm incorporates a computationally efficient artificial neural network to screen candidate solutions. Results from the optimisation show that the evolutionary algorithm in combination with the artificial neural network is successful in optimising the manufacturing cell. This indicates that the use of Pareto-optimisation and neural networks may be efficient in simulation-based optimisation of complex manufacturing problems. The next step of this work will be to improve the optimisation to consider simulation randomness. To capture the stochastic behaviour of most real-world complex systems, simulations contain randomness. Instead of modelling only a deterministic path of how the system evolves in the process of time, a stochastic simulation deals with several possible paths based on random variables in the model. To tackle the problem of randomness of output samples is crucial because the normal path of the algorithm would be severely disturbed if estimates of the objective function come from only one simulation replication. The common technique to handle randomness is to send the algorithm with the average values of output samples obtained from a large number of replications. Although this technique is easy to implement, the large number of replications needed to obtain statistically confident estimates from simulation of a complex system that requires long computation time can easily render the approach to be totally impractical. There are methods that guarantee to choose the “best” among a set of solutions with a certain statistically significance level, which require fewer replications in comparison to the others (e.g. Kim–Nelson ranking and selection method [13]). However, combining statistically meaningful procedures that require relatively light computational burden with evolutionary algorithms is still an important topic for further research [12].