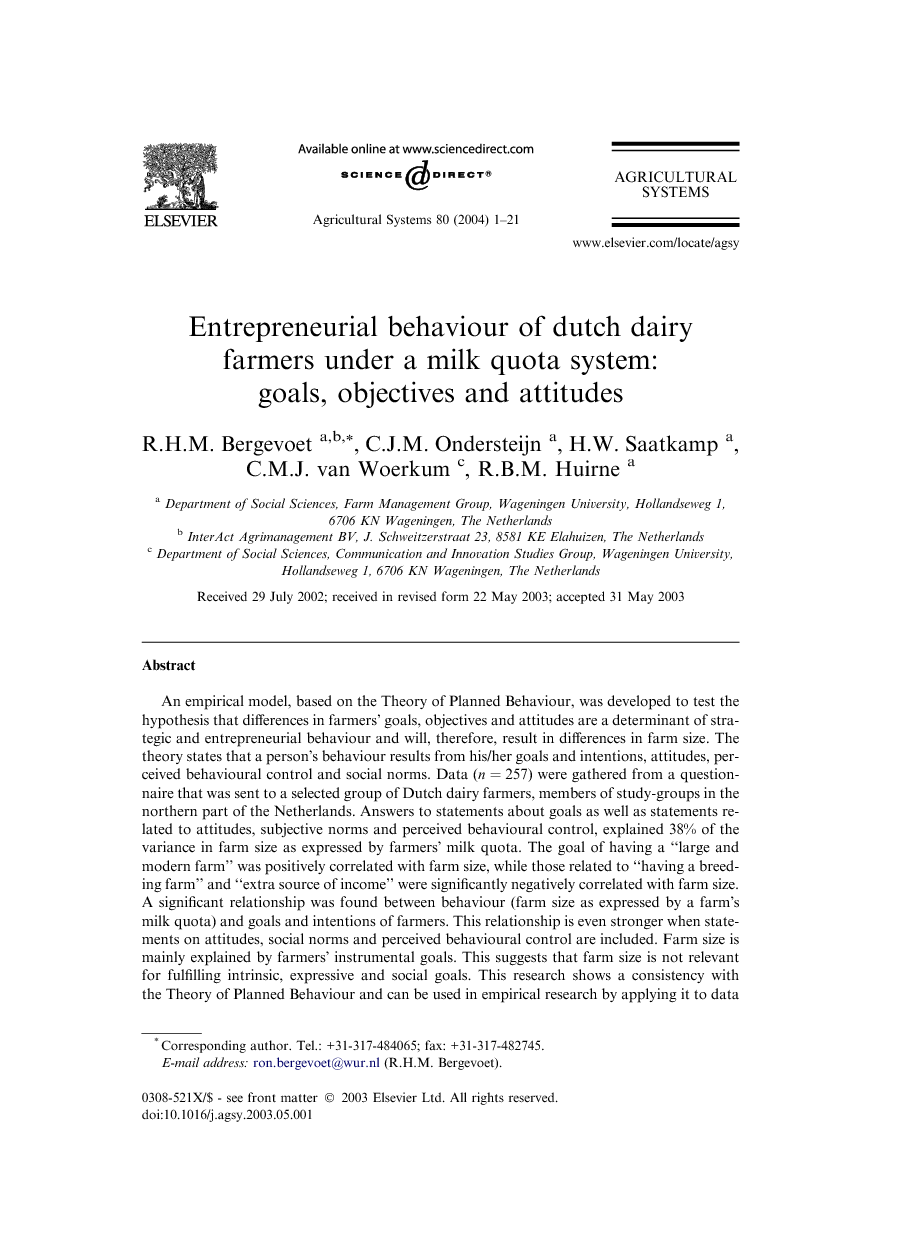 An empirical model, based on the Theory of Planned Behaviour, was developed to test the hypothesis that differences in farmers’ goals, objectives and attitudes are a determinant of strategic and entrepreneurial behaviour and will, therefore, result in differences in farm size. The theory states that a person’s behaviour results from his/her goals and intentions, attitudes, perceived behavioural control and social norms. Data (n=257) were gathered from a questionnaire that was sent to a selected group of Dutch dairy farmers, members of study-groups in the northern part of the Netherlands. Answers to statements about goals as well as statements related to attitudes, subjective norms and perceived behavioural control, explained 38% of the variance in farm size as expressed by farmers’ milk quota. The goal of having a “large and modern farm” was positively correlated with farm size, while those related to “having a breeding farm” and “extra source of income” were significantly negatively correlated with farm size. A significant relationship was found between behaviour (farm size as expressed by a farm’s milk quota) and goals and intentions of farmers. This relationship is even stronger when statements on attitudes, social norms and perceived behavioural control are included. Farm size is mainly explained by farmers’ instrumental goals. This suggests that farm size is not relevant for fulfilling intrinsic, expressive and social goals. This research shows a consistency with the Theory of Planned Behaviour and can be used in empirical research by applying it to data collected in a questionnaire. Such psychological models on decision making can help to yield insight into aspects related to entrepreneurial behaviour of dairy farmers.

In the Netherlands, dairy producers operate under the European law of milk quota. Therefore, on Dutch dairy farms, milk quota is the most important constraint in farm production. Neo-classical economic theory suggests there is an optimal farm size to which farmers should expand, given that profit maximisation is the main objective (Chambers, 1988). Despite these economic arguments, however, large differences exist in farm size (in terms of milk quota), suggesting that factors other than economic ones also play a role in determining the decision to enlarge a farm’s milk quota. Milk production in the Netherlands is limited by a system of tradable farm-based milk quota, introduced in 1984. The production volume of a farm is the sum of the milk quota assigned in 1984 (minus obligatory quota reductions) together with subsequent milk quota purchases. If a farmer wishes to expand, he/she must buy or lease quota and engage in active strategic and entrepreneurial behaviour. Farm size, therefore, is the result of (past) strategic and entrepreneurial behaviour. Until now the main emphasis in management research has been on short and medium term craftsmanship and operational management (see, for example, Rougoor et al., 1998), but recently, long term strategic and entrepreneurial behaviour is receiving more attention (Boehlje and Eidman, 1984). The number of dairy farms in the Netherlands has more than halved since the 1980s. The average herd size has increased from 35 to 50 cows per farm and the average production has doubled to an average of 398.600 litres of milk per farm per year (Agricultural Economics Research Institute, 2002; Bureau of Statistics, 2000). Even though the ownership of milk production rights (quota) is the limiting factor in milk production per farm, the variation in farm size, measured in kilogram of milk produced per farm remains large (Bureau of Statistics, 2000). In order to improve our understanding of these differences, the strategic and entrepreneurial behaviour of the farmer, his/her attitudes, objectives and goals should, therefore, be considered (Battershill and Gilg, 1997). It is hypothesised that farmers’ goals, objectives and attitudes are a determinant of strategic and entrepreneurial behaviour, and that differences in the latter will result in differences in farm size, which can be measured as total milk quota. To test this hypothesis, a model based on the Theory of Planned Behaviour was used and tested using data collected by a questionnaire. This theory has previously been used in a number of behavioural and economic research areas in agriculture: e.g., in management research (Nandram and Samsom, 2000; Robinson et al., 1991) and agricultural futures market research (Pennings and Leuthold, 2000). In the present study, it was used to try and explain farmers’ entrepreneurial behaviour. The following section describes the Theory of Planned Behaviour (Ajzen and Madden, 1986; Ajzen, 2001; Fishbein and Ajzen, 1975) and its application to dairy farmers. Based on this theory a working model was developed to explain differences in farmers’ behaviour. The analytical procedures to test the hypothesis are outlined in the next section and the empirical results are presented and discussed. Conclusions make up the final section.

Farmers goals, objectives and attitudes are a determinant of strategic and entrepreneurial behaviour in dairy farmers. Differences in the latter will result in differences in farm size, which can be measured as total milk quota.In can be concluded from the analyses that the TPB can be used in empirical research by applying it to data collected in a questionnaire. Such psychological models can help to gain insight into aspects related to entrepreneurial behaviour of dairy farmers. Farm size is mainly explained by farmers instrumental goals. This means that farm size is not relevant for fulfilling intrinsic, expressive and social goals. For extension and consulting agencies the results of this study imply that it is very important to know the goals, attitudes, perceived behavioural control and social norms of the farmer. Only then advice can be better geared towards the fulfillment of the farmers goals, both economic and non-economic.Moreover, if society wants farmers to express specific behaviour, this model gives opportunities to influence this. Adoption of a policy by farmers is more likely if it is in agreement with their specified economic and non-economic goals. There can also be a role for policy to remove obstacles that prevent the society-preferred behaviour of the farmer.