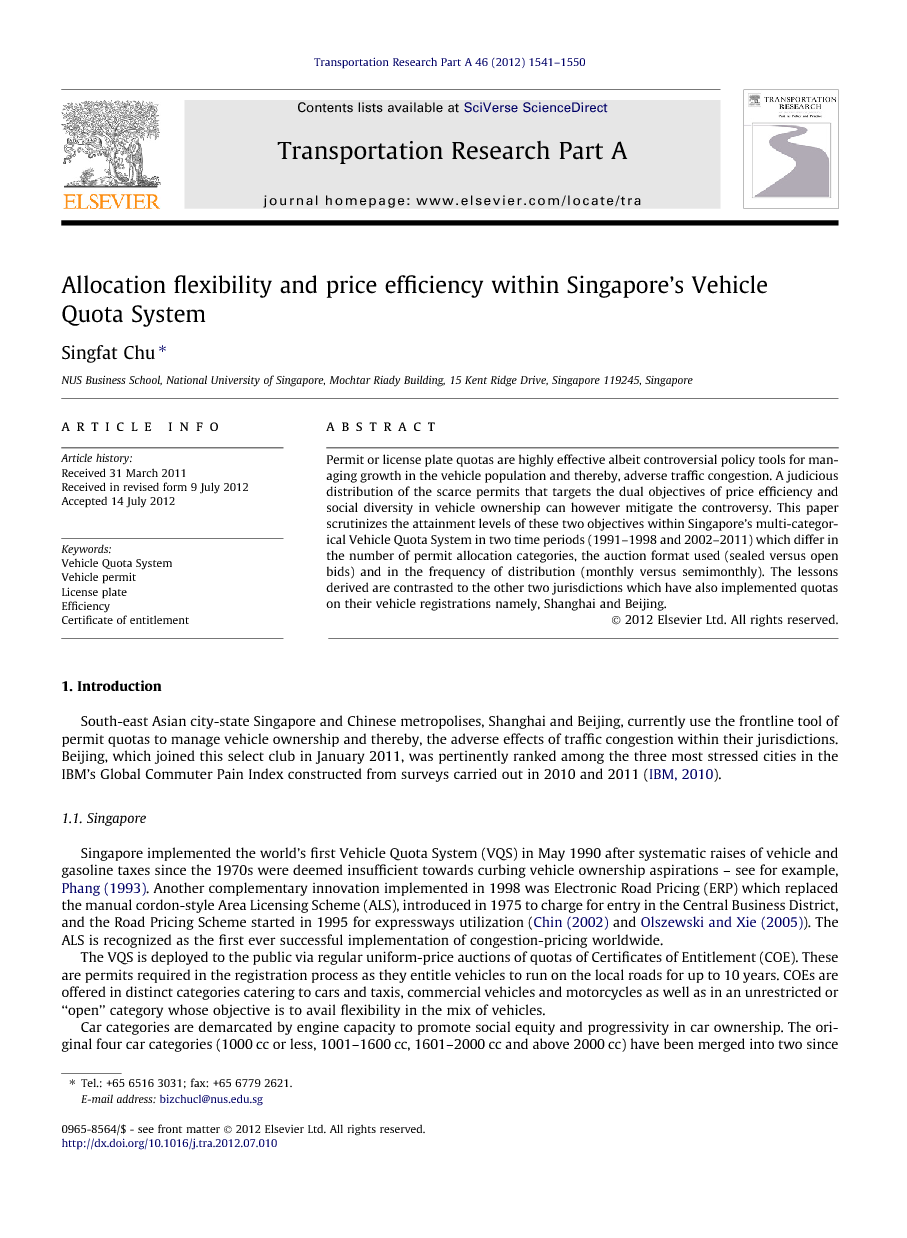 Permit or license plate quotas are highly effective albeit controversial policy tools for managing growth in the vehicle population and thereby, adverse traffic congestion. A judicious distribution of the scarce permits that targets the dual objectives of price efficiency and social diversity in vehicle ownership can however mitigate the controversy. This paper scrutinizes the attainment levels of these two objectives within Singapore’s multi-categorical Vehicle Quota System in two time periods (1991–1998 and 2002–2011) which differ in the number of permit allocation categories, the auction format used (sealed versus open bids) and in the frequency of distribution (monthly versus semimonthly). The lessons derived are contrasted to the other two jurisdictions which have also implemented quotas on their vehicle registrations namely, Shanghai and Beijing.

The analyses carried out in this paper have demonstrated that Singapore’s multi-categorical COE scheme has attained over its 21 years existence a high degree of price efficiency across its different categories. Car ownership diversity was also shown to correlate with rising affluence. These have been achieved thanks to a policy planning process that made several good decision calls when implementing the VQS. This includes the allocation of the Certificates of Entitlement (COEs) in specific vehicle categories as well as an “open” category to cater for flexibility in the vehicle mix, the shift in the uniform price auction format from sealed to open bids which has improved transparency and mitigated price volatility (Chu, 2011) and last but not least, the decision to allow vehicle distributors to bid for COEs on behalf of their clients. This is a key difference between Singapore and Shanghai or Beijing where applications for vehicle permits are mostly made by individual buyers. Vehicle distributors account for almost all the bids for COEs as they offer a convenient service bundle which comprises an attractive credit financing of both the vehicle purchase and the COE premium7 as well as the administrative chore of placing a bid on behalf of the vehicle buyer and if needed, update the bid amount – see for example Koh (2003) for details. While accumulating orders ahead of each auction, they are in a better position to gauge overall demand for COEs and therefore, they are more informed relative to individual bidders under both sealed and open bids auction formats. This is a likely explanation for the remarkable price efficiencies noted in this paper across different COE categories, especially amidst the opacity of sealed bids between 1991 and 1998. It is quite unlikely that Singapore will ever resort to the auction of COEs in a single car category, as in Shanghai. This is demonstrated by two official announcements. In January 2011, the Transport Ministry rejected a request by the Motor Traders Association for the elimination of the “open” CatE. It highlighted the flexibility that category played in meeting vehicle demand changes. This is supported by Fig. 1, Fig. 6 and Fig. 7 in this paper which demonstrate how the “open” COE conversions have aligned with increasing affluence. With the trend towards green vehicles with smaller engines, the “open” Cat7 COEs can likewise play a useful role to meet such changing demand in the future. Also in 1999, the possibility of a single car category with the COE premium scaled according to either the engine capacity or import value of the car (also suggested in Koh and Lee (1994)) was rejected by the VQS Review Committee as it opined (p15, items 23–25) that it would be hard to calibrate a scaling mechanism and furthermore that would portray the VQS as a taxation measure rather than an allocator of scarce COEs. The rationing of license plates in Singapore, as well as in Shanghai and Beijing, are worth following by policy makers as more cities (e.g. Mexico City ranked at the top of IBM’s Commuter Pain surveys in both 2010 and 2011) become entangled in road congestion. A recent publication by Muthukrishnan (2010) demonstrates interestingly that a shift from fixed to usage charges for vehicles may not be welfare-improving. When the construct was tested on Singapore data, the same results were obtained when fixed charges (i.e. COEs) were reduced and variable charges (e.g. ERP) increased. This finding provides support to the effectiveness of license plate auctions which extract fixed charges from vehicle buyers.