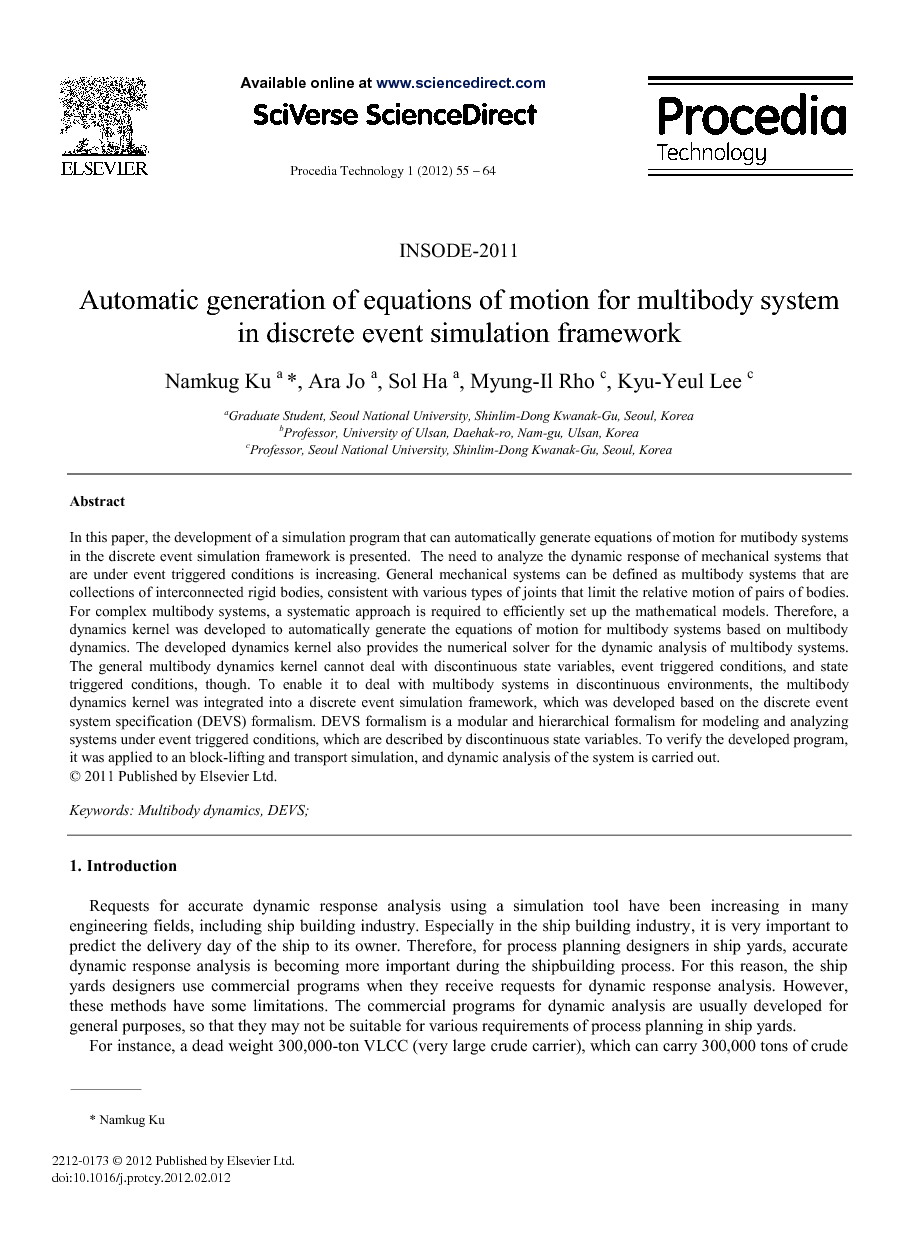 In this paper, the development of a simulation program that can automatically generate equations of motion for mutibody systems in the discrete event simulation framework is presented. The need to analyze the dynamic response of mechanical systems that are under event triggered conditions is increasing. General mechanical systems can be defined as multibody systems that are collections of interconnected rigid bodies, consistent with various types of joints that limit the relative motion of pairs of bodies. For complex multibody systems, a systematic approach is required to efficiently set up the mathematical models. Therefore, a dynamics kernel was developed to automatically generate the equations of motion for multibody systems based on multibody dynamics. The developed dynamics kernel also provides the numerical solver for the dynamic analysis of multibody systems. The general multibody dynamics kernel cannot deal with discontinuous state variables, event triggered conditions, and state triggered conditions, though. To enable it to deal with multibody systems in discontinuous environments, the multibody dynamics kernel was integrated into a discrete event simulation framework, which was developed based on the discrete event system specification (DEVS) formalism. DEVS formalism is a modular and hierarchical formalism for modeling and analyzing systems under event triggered conditions, which are described by discontinuous state variables. To verify the developed program, it was applied to an block-lifting and transport simulation, and dynamic analysis of the system is carried out.

Requests for accurate dynamic response analysis using a simulation tool have been increasing in many engineering fields, including ship building industry. Especially in the ship building industry, it is very important to predict the delivery day of the ship to its owner. Therefore, for process planning designers in ship yards, accurate dynamic response analysis is becoming more important during the shipbuilding process. For this reason, the ship yards designers use commercial programs when they receive requests for dynamic response analysis. However,these methods have some limitations. The commercial programs for dynamic analysis are usually developed for general purposes, so that they may not be suitable for various requirements of process planning in ship yards. For instance, a dead weight 300,000-ton VLCC (very large crude carrier), which can carry 300,000 tons of crude oil, can be delivered to a ship owner after a total design and production period of about 14 months. To build the VLCC, the ship is divided into about 200 blocks, as shown in Fig 1-(a), and the blocks are erected in a dock. For the erection of the blocks, block-lifting and transport design is required, and is a part of the process planning. Blocklifting and transport are performed using various types of cranes, and the cranes are defined as multibody systems, which are collections of interconnected rigid bodies, consistent with various types of joints that limit the relative motion of pairs of bodies. Fig 1-(b) shows a goliath crane, which can also be regarded as a multibody system.Therefore, the process planning designers need to analyze the dynamic response of multibody systems. The block-lifting and transport procedure is composed, however, of several discontinuous stages, such as hoist-up, hoistdown, and turn-over. Meanwhile most of commercial programs for multibody dynamic analysis cannot deal with discontinuous state variables, event triggered conditions, and state triggered conditions.