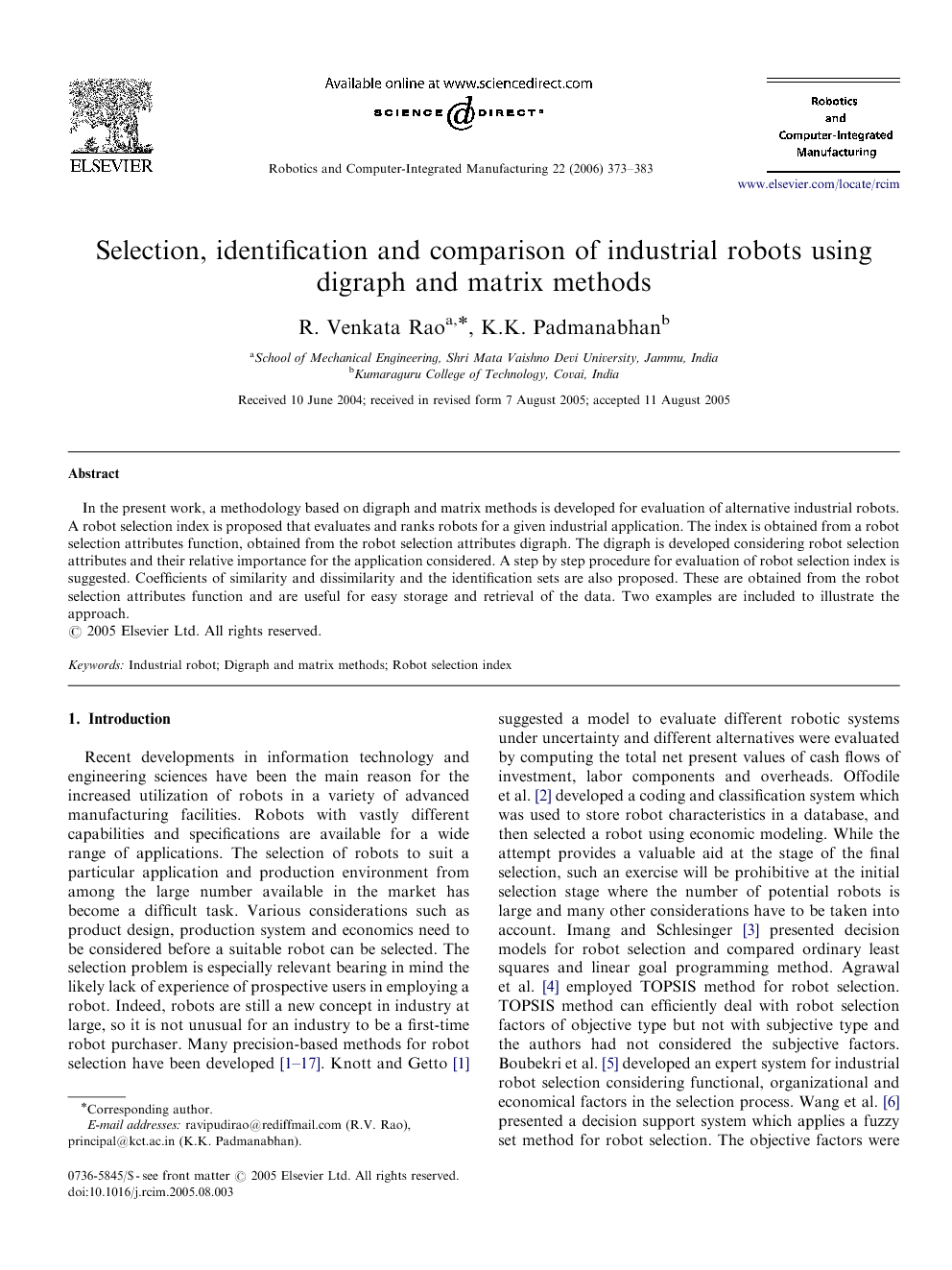 Recent developments in information technology and engineering sciences have been the main reason for the increased utilization of robots in a variety of advanced manufacturing facilities. Robots with vastly different capabilities and specifications are available for a wide range of applications. The selection of robots to suit a particular application and production environment from among the large number available in the market has become a difficult task. Various considerations such as product design, production system and economics need to be considered before a suitable robot can be selected. The selection problem is especially relevant bearing in mind the likely lack of experience of prospective users in employing a robot. Indeed, robots are still a new concept in industry at large, so it is not unusual for an industry to be a first-time robot purchaser. Many precision-based methods for robot selection have been developed [1], [2], [3], [4], [5], [6], [7], [8], [9], [10], [11], [12], [13], [14], [15], [16] and [17]. Knott and Getto [1] suggested a model to evaluate different robotic systems under uncertainty and different alternatives were evaluated by computing the total net present values of cash flows of investment, labor components and overheads. Offodile et al. [2] developed a coding and classification system which was used to store robot characteristics in a database, and then selected a robot using economic modeling. While the attempt provides a valuable aid at the stage of the final selection, such an exercise will be prohibitive at the initial selection stage where the number of potential robots is large and many other considerations have to be taken into account. Imang and Schlesinger [3] presented decision models for robot selection and compared ordinary least squares and linear goal programming method. Agrawal et al. [4] employed TOPSIS method for robot selection. TOPSIS method can efficiently deal with robot selection factors of objective type but not with subjective type and the authors had not considered the subjective factors. Boubekri et al. [5] developed an expert system for industrial robot selection considering functional, organizational and economical factors in the selection process. Wang et al. [6] presented a decision support system which applies a fuzzy set method for robot selection. The objective factors were evaluated via marginal value functions while the subjective factors were evaluated via fuzzy set membership function. Data from both evaluations were finally processed such that a fuzzy set decision vector was obtained. However, the fuzzy method presented is a complicated one and requires more computation. Booth et al. [7] proposed a decision model for the robot selection problem using both Mahalanobis distance analysis, i.e. a multivariate distance measure, and principal-components analysis. Liang and Wang [8] proposed a robot selection algorithm by combing the concepts of fuzzy set theory and hierarchical structure analysis. The algorithm was used to aggregate decision-makers’ fuzzy assessments about robot selection factors weightings and to obtain fuzzy suitability indices. The suitability ratings were then ranked to select the most suitable robot. Chu and Lin [9] pointed out the limitations of Liang and Wang [8] method and proposed a fuzzy TOPSIS method for robot selection. However, the authors had converted the available objective values of the robot selection factors into fuzzy values which violate the basic rule of fuzzy logic, i.e. the available objective values need not be fuzzified. Further, only a 5-point scale was adapted for rating of robots under subjective factors. Also, the fuzzy method is complicated and requires more computation. Khouja and Offodile [10] reviewed the literature on industrial robots selection problem and provided directions for future research. Khouja [11] presented a two-phase robot selection model that involved the application of data envelopment analysis (DEA) in the first phase and a multi-attribute decision making model in the second phase. However, DEA requires more computation and if the number of factors that the decision maker wishes to consider is very large and the number of alternative robots small, then DEA may be a poor discriminator of good and poor performers. Again, DEA may be at a disadvantage in terms of the method's rationale if the decision maker is unfamiliar with linear programming concepts.