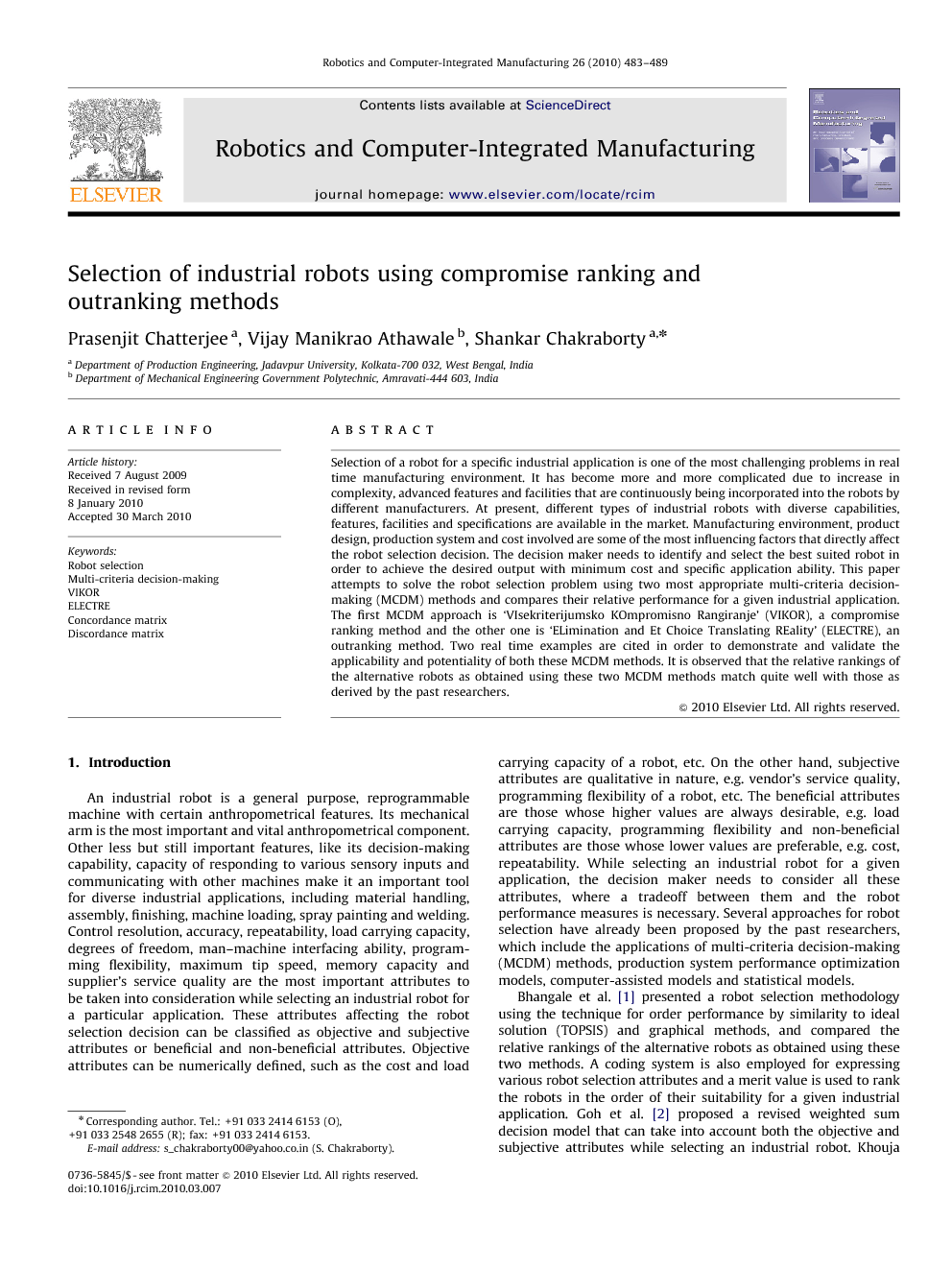 Selection of a robot for a specific industrial application is one of the most challenging problems in real time manufacturing environment. It has become more and more complicated due to increase in complexity, advanced features and facilities that are continuously being incorporated into the robots by different manufacturers. At present, different types of industrial robots with diverse capabilities, features, facilities and specifications are available in the market. Manufacturing environment, product design, production system and cost involved are some of the most influencing factors that directly affect the robot selection decision. The decision maker needs to identify and select the best suited robot in order to achieve the desired output with minimum cost and specific application ability. This paper attempts to solve the robot selection problem using two most appropriate multi-criteria decision-making (MCDM) methods and compares their relative performance for a given industrial application. The first MCDM approach is ‘VIsekriterijumsko KOmpromisno Rangiranje’ (VIKOR), a compromise ranking method and the other one is ‘ELimination and Et Choice Translating REality’ (ELECTRE), an outranking method. Two real time examples are cited in order to demonstrate and validate the applicability and potentiality of both these MCDM methods. It is observed that the relative rankings of the alternative robots as obtained using these two MCDM methods match quite well with those as derived by the past researchers.

An industrial robot is a general purpose, reprogrammable machine with certain anthropometrical features. Its mechanical arm is the most important and vital anthropometrical component. Other less but still important features, like its decision-making capability, capacity of responding to various sensory inputs and communicating with other machines make it an important tool for diverse industrial applications, including material handling, assembly, finishing, machine loading, spray painting and welding. Control resolution, accuracy, repeatability, load carrying capacity, degrees of freedom, man–machine interfacing ability, programming flexibility, maximum tip speed, memory capacity and supplier’s service quality are the most important attributes to be taken into consideration while selecting an industrial robot for a particular application. These attributes affecting the robot selection decision can be classified as objective and subjective attributes or beneficial and non-beneficial attributes. Objective attributes can be numerically defined, such as the cost and load carrying capacity of a robot, etc. On the other hand, subjective attributes are qualitative in nature, e.g. vendor’s service quality, programming flexibility of a robot, etc. The beneficial attributes are those whose higher values are always desirable, e.g. load carrying capacity, programming flexibility and non-beneficial attributes are those whose lower values are preferable, e.g. cost, repeatability. While selecting an industrial robot for a given application, the decision maker needs to consider all these attributes, where a tradeoff between them and the robot performance measures is necessary. Several approaches for robot selection have already been proposed by the past researchers, which include the applications of multi-criteria decision-making (MCDM) methods, production system performance optimization models, computer-assisted models and statistical models.

The two cited examples demonstrate the potentiality, applicability and simplicity of both the compromise ranking and outranking methods in solving industrial robot selection decision-making problems. Both these methods can incorporate the decision maker’s preferences regarding the relative importance of different robot selection attributes. As the measures of the quantitative as well as qualitative attributes and their relative importance are used together to rank the alternatives, both these MCDM methods provide a better evaluation of the alternatives. Both these compromise ranking and outranking methods are computationally easy to implement and have sound logic, which helps the decision maker to choose the best industrial robot from a finite set of alternatives for a given robot selection problem. The results derived using these two MCDM methods almost match with those as obtained by the past researchers. These methods can also be used for any type of decision-making problems, involving any number of quantitative and qualitative attributes, and any number of alternatives.