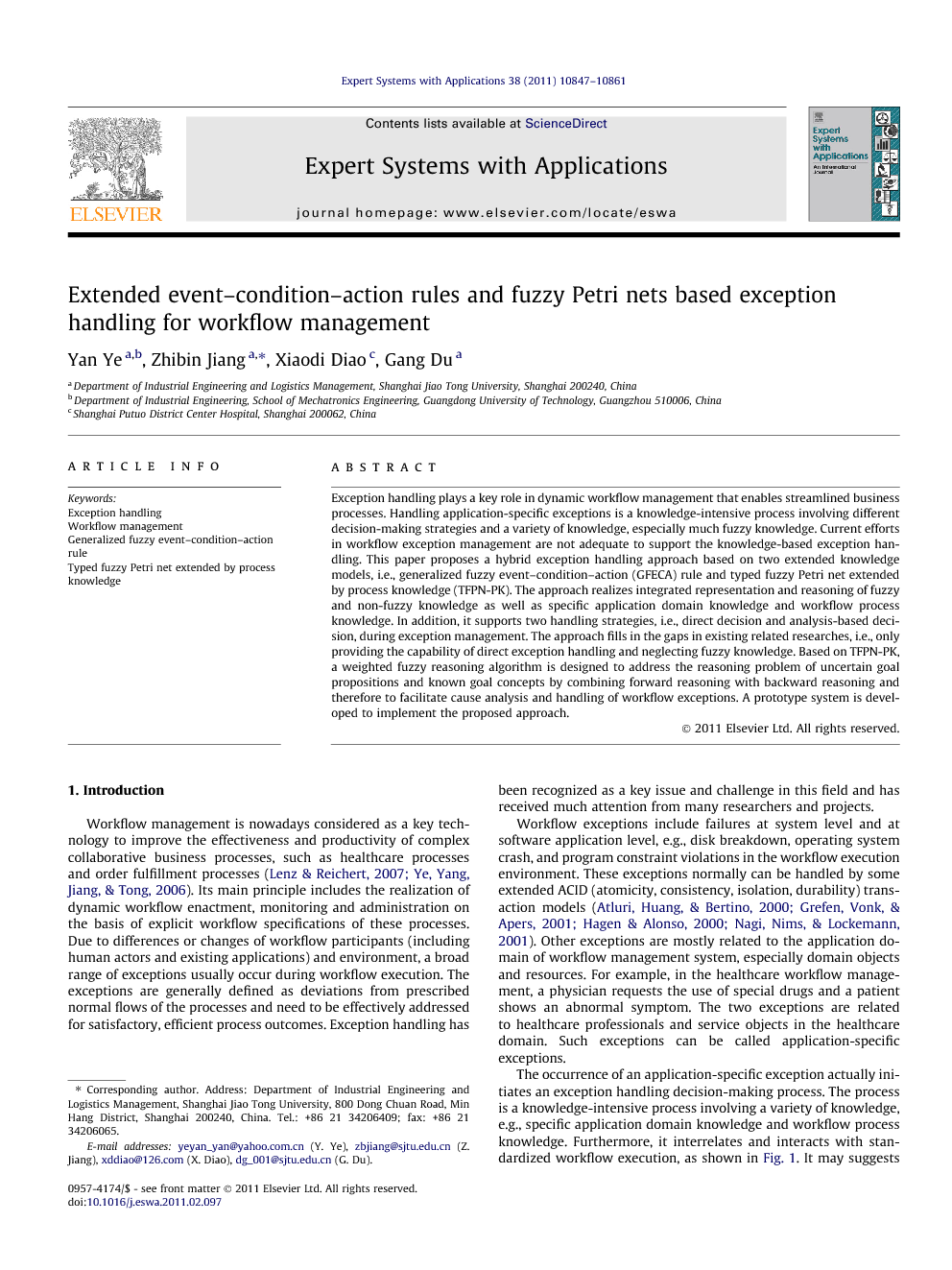 Exception handling plays a key role in dynamic workflow management that enables streamlined business processes. Handling application-specific exceptions is a knowledge-intensive process involving different decision-making strategies and a variety of knowledge, especially much fuzzy knowledge. Current efforts in workflow exception management are not adequate to support the knowledge-based exception handling. This paper proposes a hybrid exception handling approach based on two extended knowledge models, i.e., generalized fuzzy event–condition–action (GFECA) rule and typed fuzzy Petri net extended by process knowledge (TFPN-PK). The approach realizes integrated representation and reasoning of fuzzy and non-fuzzy knowledge as well as specific application domain knowledge and workflow process knowledge. In addition, it supports two handling strategies, i.e., direct decision and analysis-based decision, during exception management. The approach fills in the gaps in existing related researches, i.e., only providing the capability of direct exception handling and neglecting fuzzy knowledge. Based on TFPN-PK, a weighted fuzzy reasoning algorithm is designed to address the reasoning problem of uncertain goal propositions and known goal concepts by combining forward reasoning with backward reasoning and therefore to facilitate cause analysis and handling of workflow exceptions. A prototype system is developed to implement the proposed approach.

Workflow management is nowadays considered as a key technology to improve the effectiveness and productivity of complex collaborative business processes, such as healthcare processes and order fulfillment processes (Lenz and Reichert, 2007 and Ye et al., 2006). Its main principle includes the realization of dynamic workflow enactment, monitoring and administration on the basis of explicit workflow specifications of these processes. Due to differences or changes of workflow participants (including human actors and existing applications) and environment, a broad range of exceptions usually occur during workflow execution. The exceptions are generally defined as deviations from prescribed normal flows of the processes and need to be effectively addressed for satisfactory, efficient process outcomes. Exception handling has been recognized as a key issue and challenge in this field and has received much attention from many researchers and projects. Workflow exceptions include failures at system level and at software application level, e.g., disk breakdown, operating system crash, and program constraint violations in the workflow execution environment. These exceptions normally can be handled by some extended ACID (atomicity, consistency, isolation, durability) transaction models (Atluri et al., 2000, Grefen et al., 2001, Hagen and Alonso, 2000 and Nagi et al., 2001). Other exceptions are mostly related to the application domain of workflow management system, especially domain objects and resources. For example, in the healthcare workflow management, a physician requests the use of special drugs and a patient shows an abnormal symptom. The two exceptions are related to healthcare professionals and service objects in the healthcare domain. Such exceptions can be called application-specific exceptions. The occurrence of an application-specific exception actually initiates an exception handling decision-making process. The process is a knowledge-intensive process involving a variety of knowledge, e.g., specific application domain knowledge and workflow process knowledge. Furthermore, it interrelates and interacts with standardized workflow execution, as shown in Fig. 1. It may suggests the executions of additional activities for analyzing exceptions to workflow process and finally offers decision suggestions on exception handling and possible subsequent process change through knowledge reasoning. Then, workflow execution can continue after appropriate modification based on these suggestions.The knowledge-intensive process typically contains two handling strategies, as shown in Fig. 1. Some exceptions themselves reflect underlying reasons for their occurrences. They generally include the exceptional events related to behaviors of human actors and improper states of resources, e.g., a physician’s special request. Their handling decisions usually can be directly made based on established knowledge, such as management policies and business rules of application organizations. For example, a hospital specifies that physicians’ special requests are accepted if they can provide reasonable reasons. Thus, the request exception can be handled according to the organizational rule. Such handling strategy is called direct decision. In addition, other exceptions do not directly show their ultimate causes, e.g., abnormal situations about treatment and state of domain objects. The causes need to be first analyzed and then proper handling measures are determined by combining different relevant knowledge and possibly performing additional activities. In other words, a strategy of analysis-based decision is adopted. For instance, a patient has a high fever before scheduled surgery during predefined care process. The exception can be properly handled only after underlying reasons for the fever are ascertained. In addition, the knowledge-intensive process may involve much imprecise knowledge in the application domains. The knowledge usually contains linguistic terms without clear-cut interpretations for representing fuzzy concepts and relationships with blurred boundaries. For instance, ‘reasonable reason’ is a fuzzy concept using the linguistic term ‘reasonable’. In certain workflow application domains (e.g., healthcare domain), the descriptions of activity results may be vague. For example, lochia volume is the result of the lochia assessment activity. It is normally not described by concrete numerical values but by such linguistic terms as ‘large’, ‘medium’, and ‘small’. Additionally, the knowledge mostly contains fuzzy relationships. For instance, handling a healthcare workflow exception may use the following statement: acute bronchitis often results in fever. The knowledge indicates that there exists causal relationship between the acute bronchitis disease and the fever symptom to a certain extent, rather than the polar relationship of the disease definitely causing or not causing the symptom. Based on the above analysis, an approach to handling application-specific workflow exception is supposed to address the following problems: (1) the support of two handling strategies (i.e., direct decision and analysis-based decision); (2) integrated representation and reasoning of different relevant knowledge (e.g., specific application domain knowledge and process-related knowledge), especially fuzzy and precise knowledge. However, current efforts are mostly focused on providing the capability to directly handle exceptions and have not been found to meet these requirements. In this paper, we propose a knowledge-based hybrid exception handling approach to support direct decision and analysis-based decision strategies. The approach is based on two extended knowledge models: generalized fuzzy event–condition–action (GFECA) rule and typed fuzzy Petri net extended by process knowledge (TFPN-PK). They are presented by introducing fuzzy set theory (Zadeh, 1965 and Zadeh, 1973) and building knowledge semantic associations. A TFPN-PK-based weighted fuzzy reasoning algorithm (TFPN-PK-WFRA) is also developed to realize integrated representation and reasoning of fuzzy and non-fuzzy knowledge as well as application domain knowledge and workflow process knowledge. In addition, the handling of exception cases in the healthcare workflow management and the prototype implementation are used to demonstrate the applicability of the proposed approach in managing workflow exceptions. The remainder of this paper is organized as follows. An overview of related work is given in Section 2. Section 3 presents the hybrid approach and explains GFECA rule and direct exception handling based on the model. Based on a running example, exception analysis and handling method based on TFPN-PK and its fuzzy reasoning algorithm is discussed in Section 4. Section 5 describes the developed prototype. Finally, conclusions are given in Section 6.

Exception handling has been considered as an important issue in workflow management for realizing adaptive execution of complex business processes. This paper mainly focuses on application-specific exceptions. They normally are managed by combining and using a variety of knowledge including particular domain knowledge, activity/process-related knowledge, and especially fuzzy knowledge. Moreover, their handling is typically realized based on two different strategies, namely, direct decision and analysis-based decision. As a significant effort, we propose a hybrid exception handling approach based on GFECA rule and TFPN-PK to support handling decisions of such workflow exceptions. The contributions of the proposed approach are as follows: (1) It realizes integrated representation and reasoning of fuzzy and non-fuzzy knowledge as well as specific application domain knowledge and workflow process knowledge. Moreover, it not only supports direct exception handling through GFECA-rule-based method but provides the capability of exception handling based on cause analysis through TFPN-PK- and TFPN-PK-WFRA-based method. Thus, it fills in the gaps in existing related work, i.e., only providing the capability of direct exception handling and neglecting fuzzy knowledge during exception management. (2) In addition to modeling fuzzy relationships between propositions, the presented TFPN-PK can be used to build explicit associations among propositions, domain ontology concepts, and process knowledge. This addresses the separate problem of domain knowledge and workflow process and meets the requirements of knowledge modeling related to application-specific exception handling. (3) TFPN-PK-WFRA realizes reasoning process combing forward and backward fuzzy reasoning and addresses the problem of determining the truth values of uncertain goal propositions related to known goal concept during exception analysis and handling. It facilitates the interactions between exception knowledge reasoning and workflow applications. In this paper, exception cases in healthcare workflow management are used to demonstrate the applicability of the proposed approach in managing application-specific exceptions. In addition, we have developed a prototype system implementing the approach to provide exception analysis and handling service for a workflow management system, which can be existing products, such as BizTalk. In the future, we will integrate the developed system to selected workflow management system and then deploy them in cooperative healthcare organizations to further explore the performance of hybrid exception handling approach and developed system.