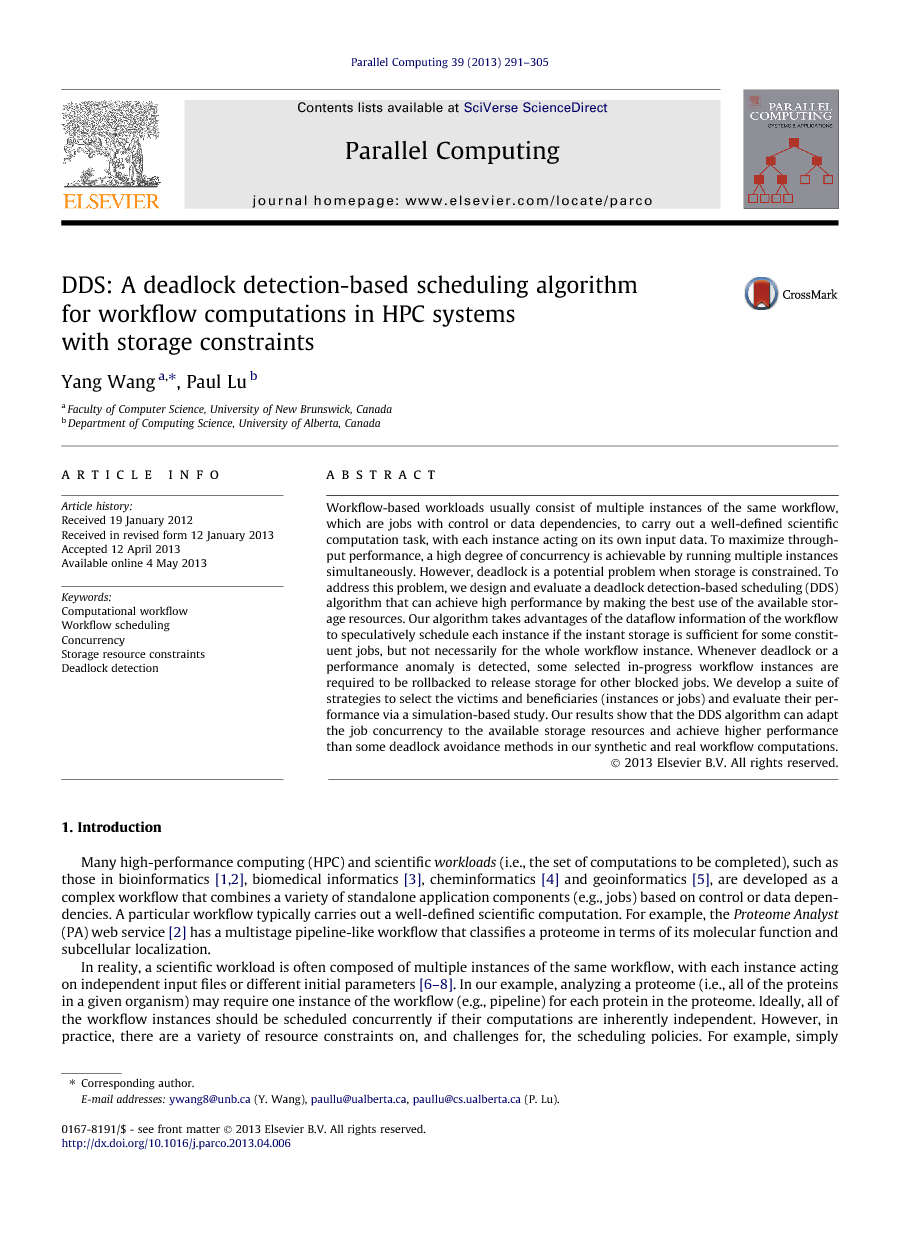 Workflow-based workloads usually consist of multiple instances of the same workflow, which are jobs with control or data dependencies, to carry out a well-defined scientific computation task, with each instance acting on its own input data. To maximize throughput performance, a high degree of concurrency is achievable by running multiple instances simultaneously. However, deadlock is a potential problem when storage is constrained. To address this problem, we design and evaluate a deadlock detection-based scheduling (DDS) algorithm that can achieve high performance by making the best use of the available storage resources. Our algorithm takes advantages of the dataflow information of the workflow to speculatively schedule each instance if the instant storage is sufficient for some constituent jobs, but not necessarily for the whole workflow instance. Whenever deadlock or a performance anomaly is detected, some selected in-progress workflow instances are required to be rollbacked to release storage for other blocked jobs. We develop a suite of strategies to select the victims and beneficiaries (instances or jobs) and evaluate their performance via a simulation-based study. Our results show that the DDS algorithm can adapt the job concurrency to the available storage resources and achieve higher performance than some deadlock avoidance methods in our synthetic and real workflow computations.

In this paper, we developed and optimized a deadlock detection and recovery algorithm named DDS for workflow-based batch scheduling. The detection component is based on the matrix-based algorithm and the essence of the recovery is reflected in two aspects: how much storage needs to be available for the recovery and how to choose the victims. Through simulation studies on three representative benchmark workloads, we investigated the impact of different amounts of available storage (i.e., from 0.25Bgt0.25Bgt to 1.00Bgt1.00Bgt) and different victim selection policies (i.e., LDF and Rnd) on the makespan performance, and found that the DDS algorithm with the overall best performance is the combination of 0.5Bgt_LDF0.5Bgt_LDF, meaning that half of the storage budget needs to be available after a deadlock has been detected and choosing the victim instances in the recovery is based on the well known LDF strategy. To evaluate the performance of the optimized DDS algorithm, we further compared it with two major deadlock avoidance algorithms, the classic Banker’s algorithm and its variant, Lang’s algorithm. Our simulation results show that the DDS algorithm is more efficient than deadlock avoidance algorithms in deadlock problem for workflow-based computations in HPC systems under storage constraints. Now that we have simulation-based evidence to support the DDS approach, the substantial work required to implement the full systems for representing, monitoring, and scheduling such workflow instances can be the subject of future work.