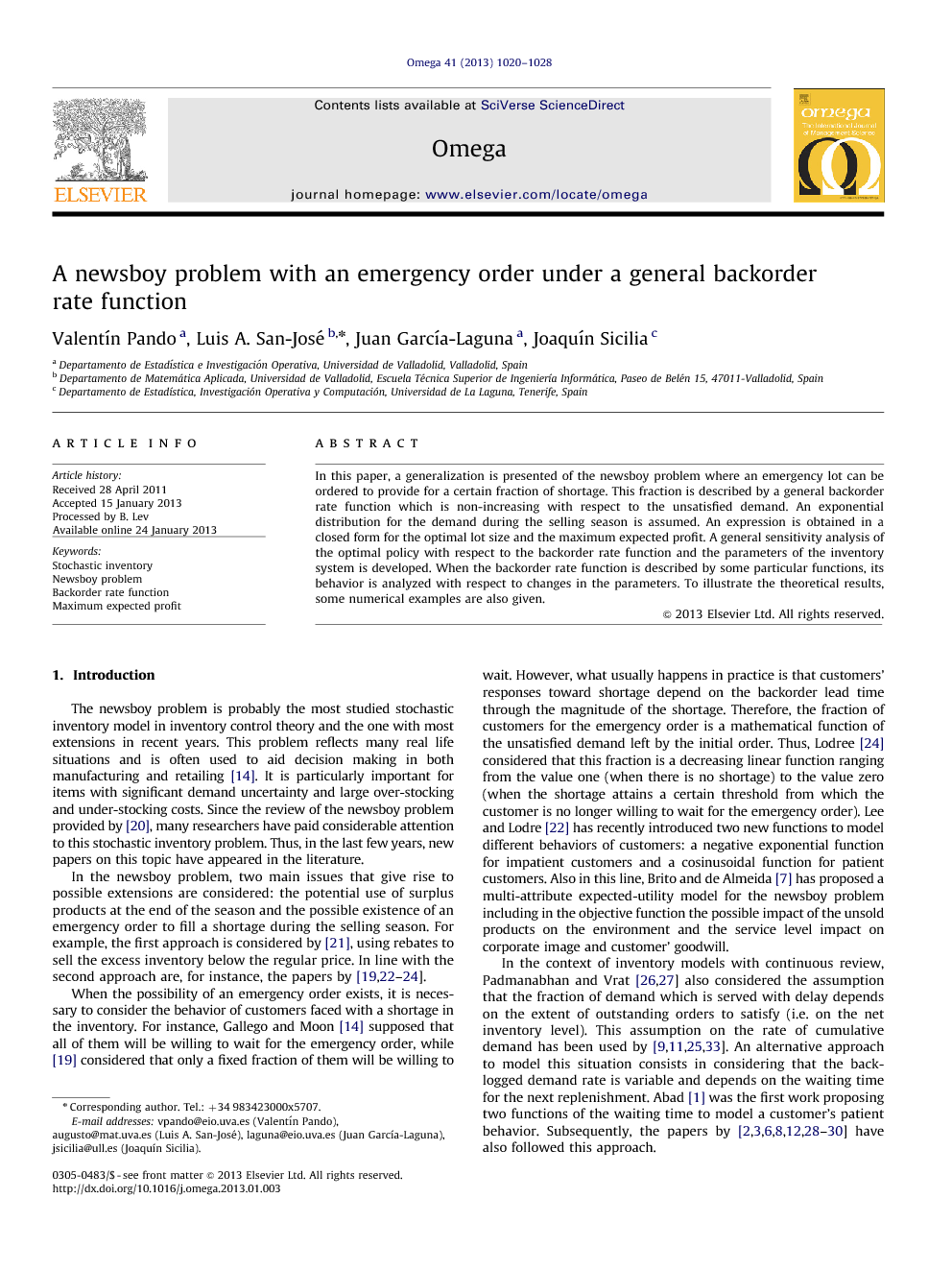 In this paper, a generalization is presented of the newsboy problem where an emergency lot can be ordered to provide for a certain fraction of shortage. This fraction is described by a general backorder rate function which is non-increasing with respect to the unsatisfied demand. An exponential distribution for the demand during the selling season is assumed. An expression is obtained in a closed form for the optimal lot size and the maximum expected profit. A general sensitivity analysis of the optimal policy with respect to the backorder rate function and the parameters of the inventory system is developed. When the backorder rate function is described by some particular functions, its behavior is analyzed with respect to changes in the parameters. To illustrate the theoretical results, some numerical examples are also given.

The newsboy problem is probably the most studied stochastic inventory model in inventory control theory and the one with most extensions in recent years. This problem reflects many real life situations and is often used to aid decision making in both manufacturing and retailing [14]. It is particularly important for items with significant demand uncertainty and large over-stocking and under-stocking costs. Since the review of the newsboy problem provided by [20], many researchers have paid considerable attention to this stochastic inventory problem. Thus, in the last few years, new papers on this topic have appeared in the literature. In the newsboy problem, two main issues that give rise to possible extensions are considered: the potential use of surplus products at the end of the season and the possible existence of an emergency order to fill a shortage during the selling season. For example, the first approach is considered by [21], using rebates to sell the excess inventory below the regular price. In line with the second approach are, for instance, the papers by [19], [22], [23] and [24]. When the possibility of an emergency order exists, it is necessary to consider the behavior of customers faced with a shortage in the inventory. For instance, Gallego and Moon [14] supposed that all of them will be willing to wait for the emergency order, while [19] considered that only a fixed fraction of them will be willing to wait. However, what usually happens in practice is that customers' responses toward shortage depend on the backorder lead time through the magnitude of the shortage. Therefore, the fraction of customers for the emergency order is a mathematical function of the unsatisfied demand left by the initial order. Thus, Lodree [24] considered that this fraction is a decreasing linear function ranging from the value one (when there is no shortage) to the value zero (when the shortage attains a certain threshold from which the customer is no longer willing to wait for the emergency order). Lee and Lodre [22] has recently introduced two new functions to model different behaviors of customers: a negative exponential function for impatient customers and a cosinusoidal function for patient customers. Also in this line, Brito and de Almeida [7] has proposed a multi-attribute expected-utility model for the newsboy problem including in the objective function the possible impact of the unsold products on the environment and the service level impact on corporate image and customer' goodwill. In the context of inventory models with continuous review, Padmanabhan and Vrat [26] and [27] also considered the assumption that the fraction of demand which is served with delay depends on the extent of outstanding orders to satisfy (i.e. on the net inventory level). This assumption on the rate of cumulative demand has been used by [9], [11], [25] and [33]. An alternative approach to model this situation consists in considering that the backlogged demand rate is variable and depends on the waiting time for the next replenishment. Abad [1] was the first work proposing two functions of the waiting time to model a customer's patient behavior. Subsequently, the papers by [2], [3], [6], [8], [12], [28], [29] and [30] have also followed this approach.

The objective of this work is to generalize the newsboy model when the vendor, faced with a situation of stockout in the inventory, has the possibility of ordering an emergency lot to satisfy the excess of demand. It is assumed that the demand follows an exponential distribution. The behavior of the customers depends on the magnitude of the shortage and only a variable fraction of the shortage is satisfied with the emergency order. This fraction is described by a general non-increasing function (named the backorder rate function), which models the patience of the customers. We introduce a new parameter, the emergency intensity, which allows us to generalize the backorder rate functions considered by other authors. We prove the uniqueness and existence of optimal decisions and, using closed-form expressions, we determine the optimal order quantity and the maximum expected profit. Next, a general sensitivity analysis of the optimal policy with respect to the backorder rate function and the parameters of the inventory system is developed. In the first case, we prove that the optimal order quantity increases and the maximum expected profit decreases when the backorder rate function transforms into a new backorder rate function which is always greater than the initial one and is strictly greater on some open interval. In the second case, we prove that the optimal lot size always gets bigger if the unit selling price is increasing. Also, the optimal order increases as the unit goodwill cost for lost sales, or the unit cost for the emergency order, increases. However, the optimal lot size always decreases if the unit effective holding cost or the unit purchasing cost increases. For the maximum expected profit, we prove that it always gets bigger if the unit selling price is increasing, and it always decreases with the four cost parameters. We analyze the behavior of some backorder rate functions with respect to changes in their specific parameters. Depending on the values of these parameters, the functions allow us to model different situations which characterize the patience of customers when faced with shortages in the inventory. Illustrative examples, which help us to understand the theoretical results, are also given. The model can be extended in several ways. Thus, we could consider other probabilistic distributions for the demand of the customers. Also, future research could be to assume multi-period situations in the model; consider a penalty cost with lost contract or future business; or establish multiple attributes or multiple objectives to be achieved, such as corporate image, competitiveness or environmental impacts.