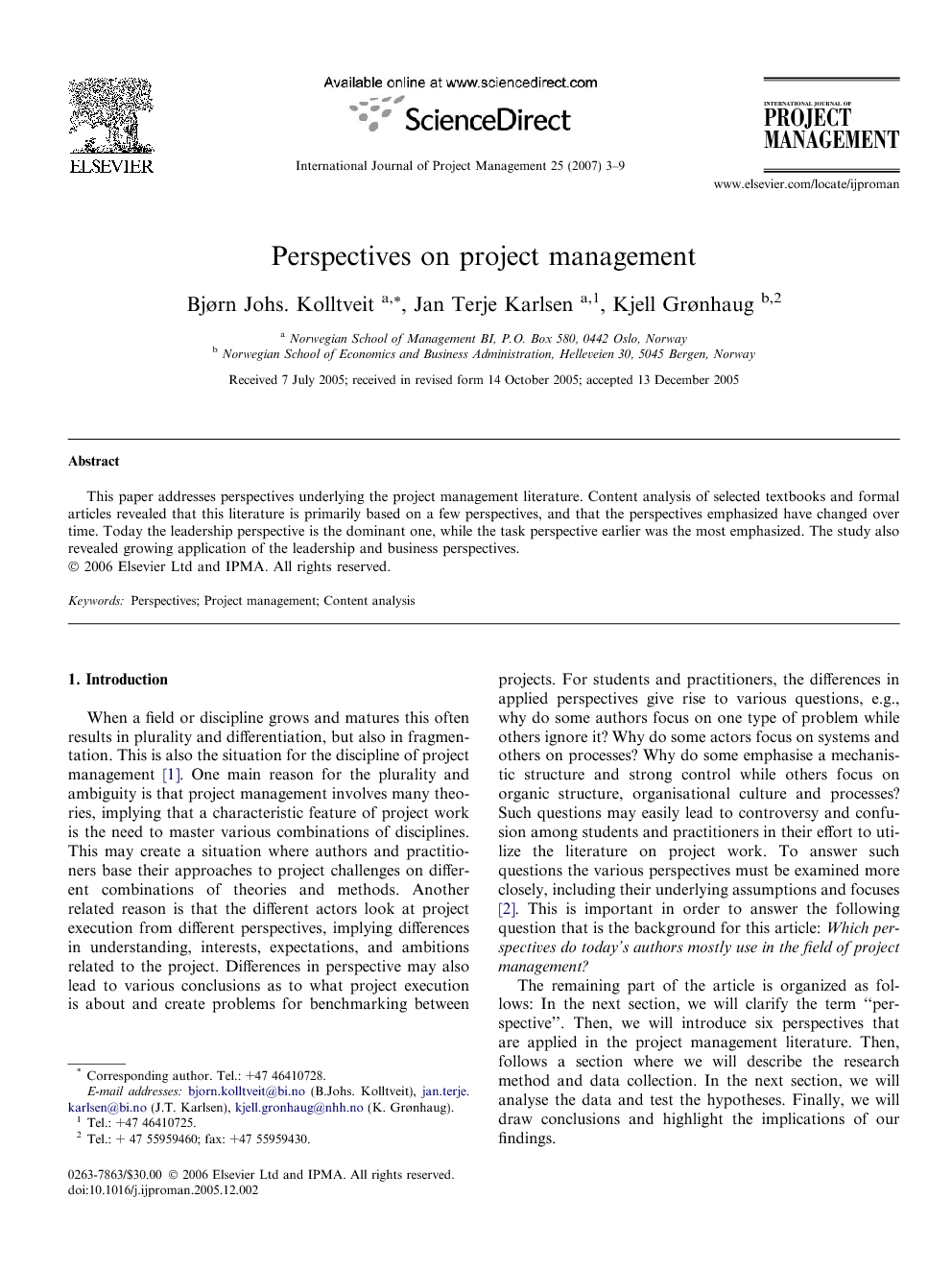 When a field or discipline grows and matures this often results in plurality and differentiation, but also in fragmentation. This is also the situation for the discipline of project management [1]. One main reason for the plurality and ambiguity is that project management involves many theories, implying that a characteristic feature of project work is the need to master various combinations of disciplines. This may create a situation where authors and practitioners base their approaches to project challenges on different combinations of theories and methods. Another related reason is that the different actors look at project execution from different perspectives, implying differences in understanding, interests, expectations, and ambitions related to the project. Differences in perspective may also lead to various conclusions as to what project execution is about and create problems for benchmarking between projects. For students and practitioners, the differences in applied perspectives give rise to various questions, e.g., why do some authors focus on one type of problem while others ignore it? Why do some actors focus on systems and others on processes? Why do some emphasise a mechanistic structure and strong control while others focus on organic structure, organisational culture and processes? Such questions may easily lead to controversy and confusion among students and practitioners in their effort to utilize the literature on project work. To answer such questions the various perspectives must be examined more closely, including their underlying assumptions and focuses [2]. This is important in order to answer the following question that is the background for this article: Which perspectives do today’s authors mostly use in the field of project management? The remaining part of the article is organized as follows: In the next section, we will clarify the term “perspective”. Then, we will introduce six perspectives that are applied in the project management literature. Then, follows a section where we will describe the research method and data collection. In the next section, we will analyse the data and test the hypotheses. Finally, we will draw conclusions and highlight the implications of our findings.

Our findings reveal that there are significant differences in emphasis on the various perspectives. Further, findings show that the task and leadership perspectives together are dominant in modern project management literature, indicating that the literature is primarily based upon these two perspectives. In addition, our findings indicate that the modern project management literature focuses more on leadership than the traditional literature used to. Further, our findings show that the leadership perspective is the single most used perspective today, and the project management literature shows a growing application of this perspective. We are aware that our study has limitations and weaknesses. The fact that only 11 books were studied can definitely be questioned. One may argue that by including observations from more books the pattern of distribution shown in Table 3 might be changed. However, we made an interesting observation when conducting the study. As Table 5 was completed book by book, no significant changes in the distribution of observations were found! With the exception of observations from two books, there were only minor adjustments in the accumulated distribution. Based on this observation we considered it unnecessary to include more books. It may also be questioned whether the book index fully reflects the author’s entire perspective on project work. In order to eliminate this problem the text in the books related to each observation was carefully examined. This examination did not reveal any information indicating that the author’s perspective was not fully reflected in the book index. The reported findings have both practical and theoretical implications. During the last decades the field of project management has gained enormous interest and the number of books and articles has escalated considerably. As demonstrated above there has been a trend towards more attention on project processes, which implies a need for debate on the identity of project management research. One surprising observation was the modest number of observations related to the stakeholder perspective. This may be an indication that modern authors do not show a particular interest in the stakeholders. We will argue that effective stakeholder management is important for project success, and we thus strongly believe that the stakeholder perspective should be given more attention in the future. Another interesting finding is the number of observations in recent articles related to the business perspective, which focuses on strategy, business case, profit, and benefit realization. This indicate a growing interest in the application of the business perspective in recent articles on project management. We will also argue that the focus on some perspectives of project management at the expense of others creates a risk of explicitly endorsing some perspectives while implicitly downplaying others. It is the project manager’s responsibility to combine human, natural and technological resources in a dynamic but temporary organization to deliver results that include the social as well as the technological aspects [27]. In other words, project management has to deal with an enormously broad range of issues: technology, organization, strategy, finance, contracts, culture, planning, control, communication, environment, teamwork, etc. According to Morris, many project managers find themselves having to address just such a broad range of issues and perspectives, however, they will normally not see themselves as experts in all these different areas [28]. Instead, project managers will focus on how to integrate and lead the work of the specialists. This view should be reflected in future project management literature. As a concluding remark we will highlight the need for more research. There is no doubt that there is a need more research to develop an understanding of the plurality within the field of project research. In this study we have examined six perspectives. In our view, the users of project management literature will benefit if the literature can be grouped into a few “super-perspectives” [2]. Despite strong indications of a few dominant perspectives, our observations do not offer any conclusions on what constitutes a possible super-perspective, or any suggestions of what are the most relevant super-perspectives for the project management literature. This is an area for future research.