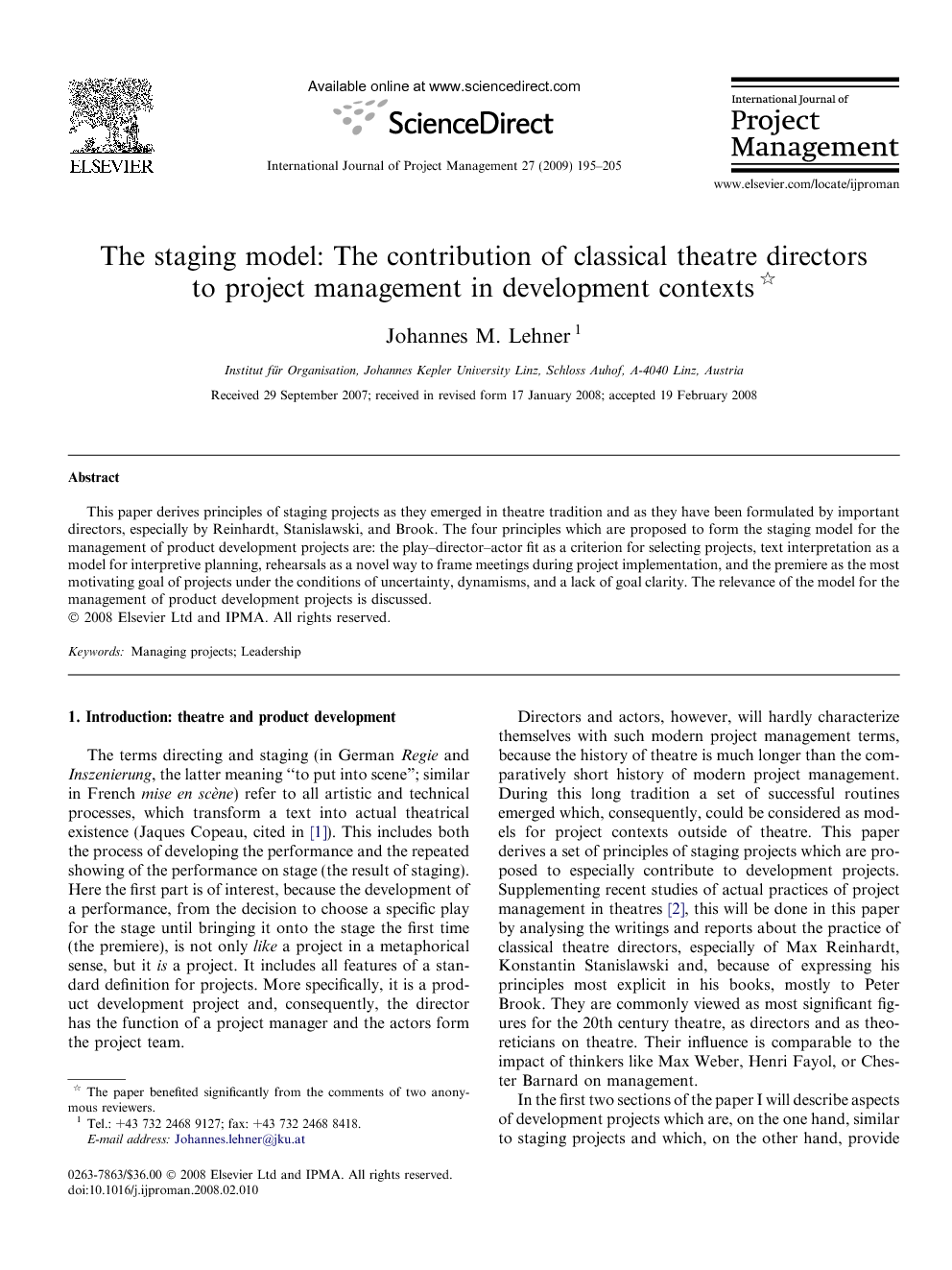 This paper derives principles of staging projects as they emerged in theatre tradition and as they have been formulated by important directors, especially by Reinhardt, Stanislawski, and Brook. The four principles which are proposed to form the staging model for the management of product development projects are: the play–director–actor fit as a criterion for selecting projects, text interpretation as a model for interpretive planning, rehearsals as a novel way to frame meetings during project implementation, and the premiere as the most motivating goal of projects under the conditions of uncertainty, dynamisms, and a lack of goal clarity. The relevance of the model for the management of product development projects is discussed.

The terms directing and staging (in German Regie and Inszenierung, the latter meaning “to put into scene”; similar in French mise en scène) refer to all artistic and technical processes, which transform a text into actual theatrical existence (Jaques Copeau, cited in [1]). This includes both the process of developing the performance and the repeated showing of the performance on stage (the result of staging). Here the first part is of interest, because the development of a performance, from the decision to choose a specific play for the stage until bringing it onto the stage the first time (the premiere), is not only like a project in a metaphorical sense, but it is a project. It includes all features of a standard definition for projects. More specifically, it is a product development project and, consequently, the director has the function of a project manager and the actors form the project team. Directors and actors, however, will hardly characterize themselves with such modern project management terms, because the history of theatre is much longer than the comparatively short history of modern project management. During this long tradition a set of successful routines emerged which, consequently, could be considered as models for project contexts outside of theatre. This paper derives a set of principles of staging projects which are proposed to especially contribute to development projects. Supplementing recent studies of actual practices of project management in theatres [2], this will be done in this paper by analysing the writings and reports about the practice of classical theatre directors, especially of Max Reinhardt, Konstantin Stanislawski and, because of expressing his principles most explicit in his books, mostly to Peter Brook. They are commonly viewed as most significant figures for the 20th century theatre, as directors and as theoreticians on theatre. Their influence is comparable to the impact of thinkers like Max Weber, Henri Fayol, or Chester Barnard on management. In the first two sections of the paper I will describe aspects of development projects which are, on the one hand, similar to staging projects and which, on the other hand, provide opportunities to learn from staging projects in general and from theatre directors in particular. The subsequent main part of the paper will be structured along these aspects.

Some aspects of the staging model may inform all types of projects. However, its description always referred to the similarity between product developments in the industrial context and the development of performance in theatre. One of the most salient features of both contexts is the lack of clear goals at the beginning of a project. As a consequence planning has a very different meaning than in, for example, engineering projects. Therefore, the paper assumes relevance of the staging model for product developments but not for projects in construction and in engineering contexts, for which approved routines and more or less standardized methods exist. It remains to be discussed whether the staging model should be viewed as a replacement or a supplement to standard project management. Generally, the staging model should be seen as an addition to standard project management, because the latter has obviously contributed significantly to the success of projects also in development context, especially in large projects. But the staging model also shows that some traditional guidelines may be misleading. First, to view a development project in the light of staging will inform the selection decision in a different way then traditional financial considerations, such as real options valuation. The selection of projects will be based stronger on the fit between project content, project manager and team members, as it is described through the process of casting. The importance of selecting the appropriate project managers and team members have been emphasized already early in the project management literature. However, in contrast to traditional approaches, where this selection is seen as a subordinate task after selecting the project based on criteria in regard to strategy, the market, and financing, the staging model presented here treats the fit between project content (play), project manager (director), and team members (actor) as the central selection criterion, which informs all other decision criteria. Even if financial criteria suggest a potential success of a product, a development project should be started only if a fit between project content, leader, and team members can be attained. Second, whereas the frequent observation that plans render meaningless in an uncertain and dynamic world leads often to negative attitudes against planning and meetings, the staging model highlights planning as ongoing interpretation. Further, to view meetings as rehearsals suggests that plans and associated tasks will not be finished at specific milestones but need to be constantly reinterpreted and redone just like a dramatic text. It will provide with an increased awareness for the non-linear dynamics of development which can be handled only through constant rehearsing. Finally, the increased awareness of limited time for product development not only as a restriction but also as a motivating force is expressed through framing the project’s closing as a premiere. The history of theatre shows also that the pressure of rigid deadlines is but a new invention of recent shortened development cycles. Rather it reflects, on the one hand, the ultimate importance of the premiere for staging and, on the other hand, the strongest motivational force for team members. Although the paper does not go into the details of marketing for an innovative product as an important part of development projects, the premiere is proposed as a prominent means to incorporate such tasks into the development project, instead of leaving it to an isolated marketing department. Generally, the staging model stresses the importance of the project manager. Leadership studies and the writings of the classical theatre directors, which where used for this paper, somewhat converge in showing the importance of leader–member exchange for successful development projects. Especially for large-scale developments, however, where there is not only one project manager but a complex hierarchy of managers and teams, this role seems to lose importance. But the model is applicable even if a manager and the team are only responsible for a small module within a large project. A project manager who sees herself or himself as a director will place more emphasis on orchestrating the interplay of technical imperatives of the project (the text), the potentials of the organization (the stage), and its team members (the actors). Overall, the practicing managers and the owners of development projects may gain from the staging model by receiving a fresh look on their roles, which they may have seen solely from a technical or an economic perspective. In this paper a number of studies are cited which illustrate how the principles of the staging model may translate into non-artistic development contexts. In this regard, the staging model contributes to the description of successful practices and may guide future research. Empirical research should also examine the effects of focusing on these aspects and should compare these principles to more traditional ways of managing projects in development contexts. More specifically, the aspects of the staging model can be directly translated into empirically testable hypothesis about effects of alternative methods to select projects, to use planning and meetings, and to manage time in development projects. For example, the association between, first, the degree of fit between project content, project manager, and team members (play–director–actor fit) and, second, performance criteria, such as quality or speed of development is a candidate for empirical testing. Other hypotheses could refer to process criteria, such as the association between the way meetings are framed by team members (rehearsal) and the degree of satisfaction with the processes during the project. Further, the influence of the amount of ambiguity, uncertainty, and tensions through enacted paradox associated with the development project should be examined further. The model proposes that the framing of the project’s end as a premiere will motivate the whole process of development projects far beyond mere considerations in regard to cost and competitiveness.