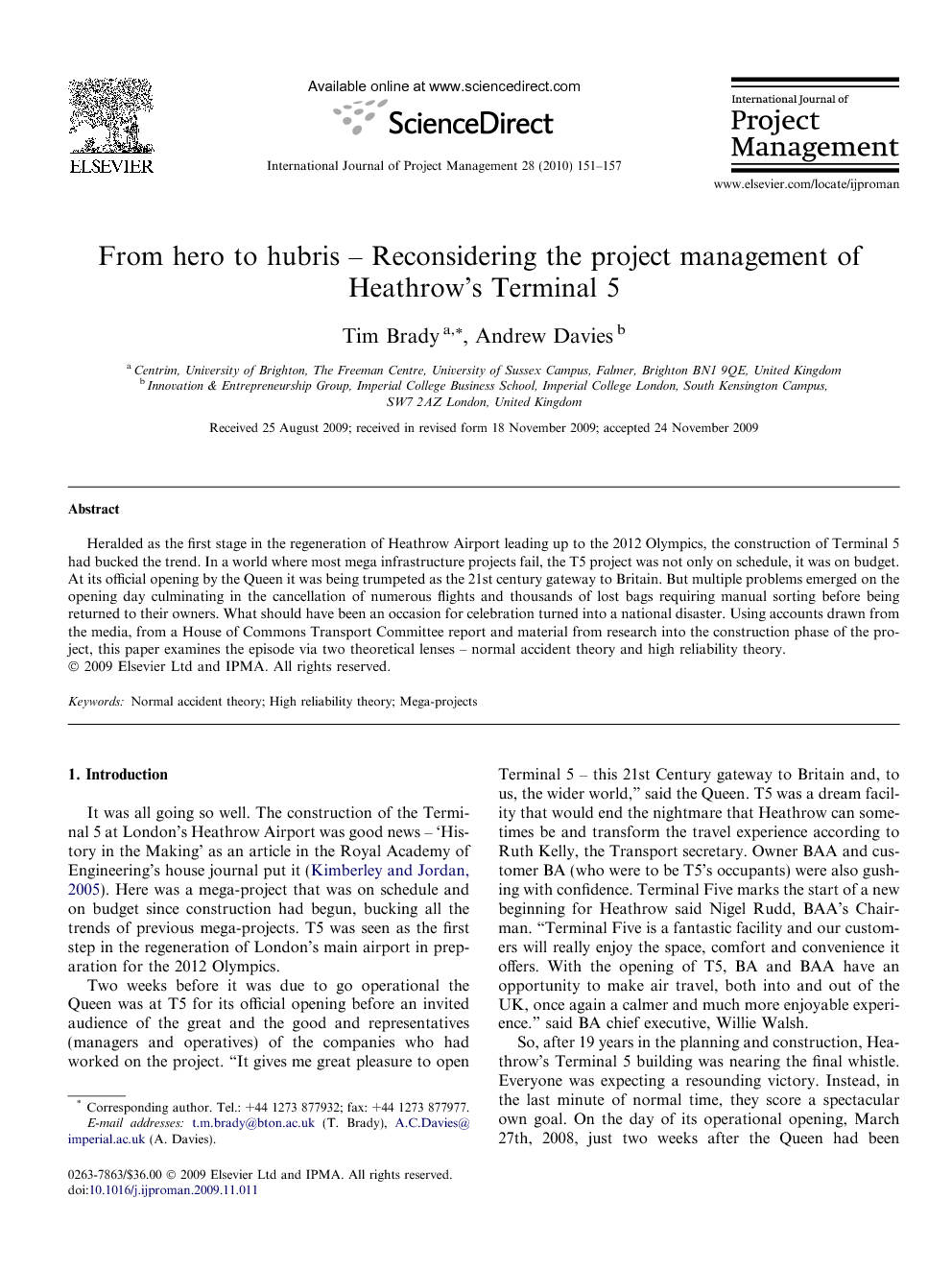 Heralded as the first stage in the regeneration of Heathrow Airport leading up to the 2012 Olympics, the construction of Terminal 5 had bucked the trend. In a world where most mega infrastructure projects fail, the T5 project was not only on schedule, it was on budget. At its official opening by the Queen it was being trumpeted as the 21st century gateway to Britain. But multiple problems emerged on the opening day culminating in the cancellation of numerous flights and thousands of lost bags requiring manual sorting before being returned to their owners. What should have been an occasion for celebration turned into a national disaster. Using accounts drawn from the media, from a House of Commons Transport Committee report and material from research into the construction phase of the project, this paper examines the episode via two theoretical lenses – normal accident theory and high reliability theory.

It was all going so well. The construction of the Terminal 5 at London’s Heathrow Airport was good news – ‘History in the Making’ as an article in the Royal Academy of Engineering’s house journal put it (Kimberley and Jordan, 2005). Here was a mega-project that was on schedule and on budget since construction had begun, bucking all the trends of previous mega-projects. T5 was seen as the first step in the regeneration of London’s main airport in preparation for the 2012 Olympics. Two weeks before it was due to go operational the Queen was at T5 for its official opening before an invited audience of the great and the good and representatives (managers and operatives) of the companies who had worked on the project. “It gives me great pleasure to open Terminal 5 – this 21st Century gateway to Britain and, to us, the wider world,” said the Queen. T5 was a dream facility that would end the nightmare that Heathrow can sometimes be and transform the travel experience according to Ruth Kelly, the Transport secretary. Owner BAA and customer BA (who were to be T5’s occupants) were also gushing with confidence. Terminal Five marks the start of a new beginning for Heathrow said Nigel Rudd, BAA’s Chairman. “Terminal Five is a fantastic facility and our customers will really enjoy the space, comfort and convenience it offers. With the opening of T5, BA and BAA have an opportunity to make air travel, both into and out of the UK, once again a calmer and much more enjoyable experience.” said BA chief executive, Willie Walsh. So, after 19 years in the planning and construction, Heathrow’s Terminal 5 building was nearing the final whistle. Everyone was expecting a resounding victory. Instead, in the last minute of normal time, they score a spectacular own goal. On the day of its operational opening, March 27th, 2008, just two weeks after the Queen had been officially opening the Terminal and those quotes above had been given, disaster struck. A combination of problems led to complete chaos with passengers unable to check-in hold baggage and 68 flights had to be cancelled. The headlines in the papers next day were uncompromising. In a reference to T5’s campaign about ‘Making History’, the Times piece was headlined ‘Making History? It is memorable but for all the wrong reasons’. The chaos continued into the weekend with more flight cancellations and baggage being lost. This paper asks: How could this disaster have happened? We piece together accounts of the problems that ensued during the first few days of opening and contrast this with the promises that had been made beforehand. We examine the opening disaster through two theoretical lenses which have been used to explain other disasters and accidents – normal accident theory and high reliability theory. On balance, rather than this coming as a big surprise, we suggest that the events of the opening day should be seen as a ‘normal accident’ (Perrow, 1984), one which we might have expected, given the complexity of the system. Further we suggest that management in both BAA and BA became over-complacent to the extent that once they thought they had surmounted the considerable issues related to building such a vast and technologically sophisticated terminal they suffered from technological hubris (Hughes, 2004) and forgot about the people issues related to the successful functioning of any large technical system (Hughes, 1987). This paper draws on three main sources: documentation such as reports and articles appearing in the general and construction press in the immediate aftermath of the disastrous opening; the House of Commons Transport Committee report – ‘The opening of Heathrow Terminal 5’ (House of Commons Transport Committee, 2008); and information collected by the authors during a study about the learning gained from involvement in the T5 project. In the next section we show how BAA and BA built up expectations for T5 in the years and months preceding the opening. We go on to analyse the events of the opening day and show how an accumulation of relatively small problems combined to create the catastrophic outcome. We then contrast the focus of the efforts to transform the approach to managing the design and construction phases of T5 with the management of the operational phase.

Our analysis of the events of the opening of T5 has revealed many of the features associated with normal accident theory and with high reliability theory. While they are normally presented as conflicting schools of thought, and mutually exclusive, the two approaches sometimes reach similar conclusions (Ripma, 1997). The myriad separate problems that occurred on opening day interacted together to create system breakdown in much the way normal accident theory would have predicted. However, we also show how many elements of high reliability theory had been applied during the construction phase of T5 but were not followed through to the operational phase. This was one of the most puzzling features of the case. We suspect that this failure can be understood by reference to what Thomas Hughes refers to as technological hubris (Hughes, 2004). Throughout the construction phase of the program a huge emphasis had been placed on delivering T5 on schedule. The T5 project headquarters office had clocks counting down from the time T5 was to become operational – originally 4.a.m. 30th March 2008 but which was subsequently brought forward to 4 a.m. 27th March. This deadline was treated as sacrosanct. Thus it became politically impossible to delay the opening even though concerns were raised about the state of operational readiness (as revealed by evidence to the House of Commons Transport Committee). Furthermore, it seems that many senior managers in BAA and BA were convinced that nothing could go wrong given the success of the construction programme. In another example of how hindsight is often the only way to understand the causes of accidents in tightly coupled systems we see how “…with the benefit of hindsight we might have adopted a more humble position, given that track record, (of other airport opening disasters)and it was unfortunate that we created an expectation of perfection in what was an extremely complicated programme.” (Colin Matthews, BAA CEO in House of Commons Transport Committee, 2008) Of course T5 is not the first complex project to suffer problems on launch day. Several high-profile IT projects come to mind. The London Ambulance Service computer-aided despatch system spent over five years in development but when it went live the system quickly became overloaded – slowing down and eventually locking-up altogether. At this stage the automatic back-up system should have kicked in but this too failed to operate. As a result of these operational difficulties, they reverted to a manual system (Flowers, 1996). Similarly, the Swanwick Air Traffic Control Centre had huge problems related to getting the system operational (House of Commons Environment, 1998). By the time the ‘state-of-the-art’ system was launched in January 1992 it was already six years overdue. The system was dogged by problems in the next year. The overall systems which these IT systems were components in can both be considered tightly coupled systems. When problems arose in the IT systems they quickly escalated to cause major problems in the overall system. In both cases the faith of the procuring managers in these technical systems was evidently misplaced and in hindsight could be seen to have led to poor decision-making in the choice of systems developers and in the choice of going for tailored complex solutions instead of simpler off-the-shelf tried and tested software. They could be said to have been suffering from the same kind of technological hubris that we suggest BAA and BA managers succumbed to in the operational phase of T5. However, they differ from the T5 case in that the implementation phase of the T5 project was successfully completed on budget and to schedule whereas the IT projects were either over-budget and significantly late (Swanwick) or of such poor quality that they had to be abandoned (London Ambulance). Although we have only considered a single case in this paper, it is possible that research into other major project failures might also reveal similar levels of technological hubris which contributed significantly to their problems. Despite the problems of the first few days at Terminal 5, it now appears to be operating well. But ‘Terminal 5 Working as Planned’ does not grab many headlines. The damage done to the reputations of BA and BAA will take a lot longer to repair than the minor faults that emerged back in March 2008.