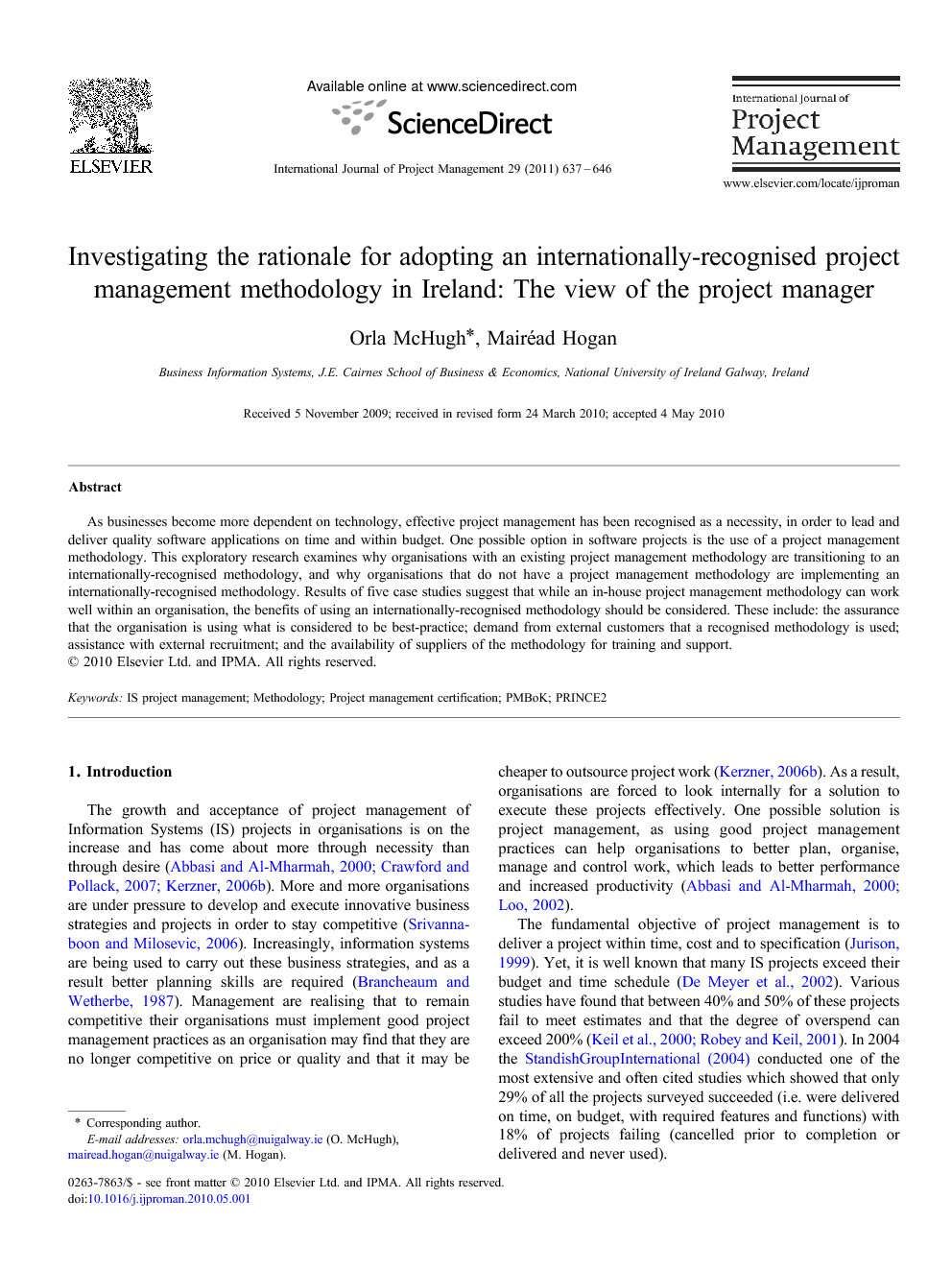 The growth and acceptance of project management of Information Systems (IS) projects in organisations is on the increase and has come about more through necessity than through desire (Abbasi & Al-Mharmah, 2000, Crawford & Pollack, 2007 and Kerzner, 2006b). More and more organisations are under pressure to develop and execute innovative business strategies and projects in order to stay competitive (Srivannaboon and Milosevic, 2006). Increasingly, information systems are being used to carry out these business strategies, and as a result better planning skills are required (Brancheaum and Wetherbe, 1987). Management are realising that to remain competitive their organisations must implement good project management practices as an organisation may find that they are no longer competitive on price or quality and that it may be cheaper to outsource project work (Kerzner, 2006b). As a result, organisations are forced to look internally for a solution to execute these projects effectively. One possible solution is project management, as using good project management practices can help organisations to better plan, organise, manage and control work, which leads to better performance and increased productivity (Abbasi & Al-Mharmah, 2000 and Loo, 2002). The fundamental objective of project management is to deliver a project within time, cost and to specification (Jurison, 1999). Yet, it is well known that many IS projects exceed their budget and time schedule (De Meyer et al., 2002). Various studies have found that between 40% and 50% of these projects fail to meet estimates and that the degree of overspend can exceed 200% (Keil et al., 2000 and Robey & Keil, 2001). In 2004 the StandishGroupInternational (2004) conducted one of the most extensive and often cited studies which showed that only 29% of all the projects surveyed succeeded (i.e. were delivered on time, on budget, with required features and functions) with 18% of projects failing (cancelled prior to completion or delivered and never used). Brock et al. (2003) are of the opinion that these IS project performance problems could be addressed by having better implementation procedures and better management of projects while Milosevic and Patanakul (2005) have identified the use of project management processes as a factor affecting the success of IS projects. Research by Parker & Skitmore, 2005 and Wateridge, 1997 has also shown that IS projects that do not have a project manager or do not follow a methodology or a defined process are more likely to fail as ultimately, the project manager is responsible for the delivery of a project and is fundamental to ensuring that the project is a success.