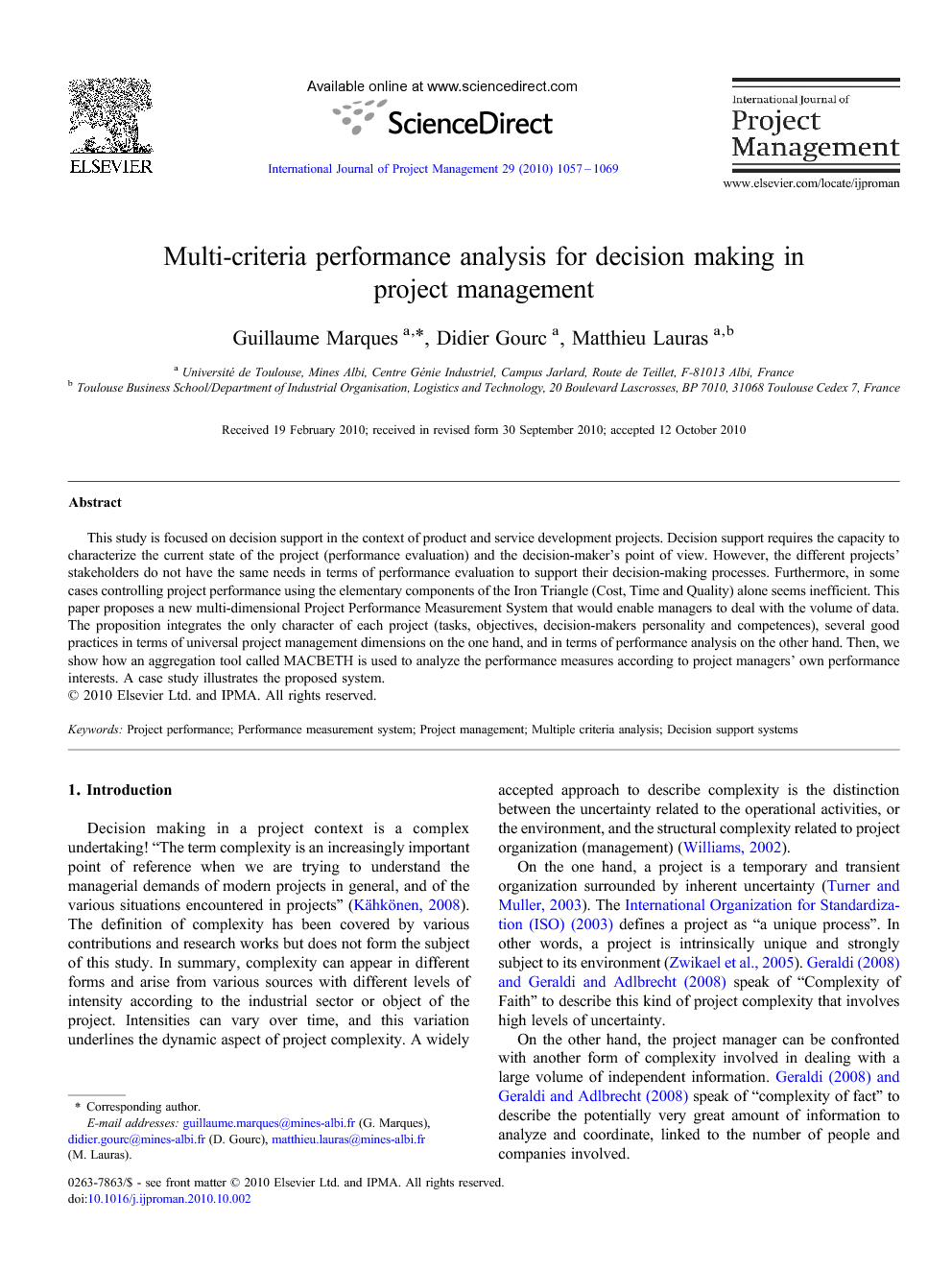 This study is focused on decision support in the context of product and service development projects. Decision support requires the capacity to characterize the current state of the project (performance evaluation) and the decision-maker's point of view. However, the different projects’ stakeholders do not have the same needs in terms of performance evaluation to support their decision-making processes. Furthermore, in some cases controlling project performance using the elementary components of the Iron Triangle (Cost, Time and Quality) alone seems inefficient. This paper proposes a new multi-dimensional Project Performance Measurement System that would enable managers to deal with the volume of data. The proposition integrates the only character of each project (tasks, objectives, decision-makers personality and competences), several good practices in terms of universal project management dimensions on the one hand, and in terms of performance analysis on the other hand. Then, we show how an aggregation tool called MACBETH is used to analyze the performance measures according to project managers’ own performance interests. A case study illustrates the proposed system.

Decision making in a project context is a complex undertaking! “The term complexity is an increasingly important point of reference when we are trying to understand the managerial demands of modern projects in general, and of the various situations encountered in projects” (Kähkönen, 2008). The definition of complexity has been covered by various contributions and research works but does not form the subject of this study. In summary, complexity can appear in different forms and arise from various sources with different levels of intensity according to the industrial sector or object of the project. Intensities can vary over time, and this variation underlines the dynamic aspect of project complexity. A widely accepted approach to describe complexity is the distinction between the uncertainty related to the operational activities, or the environment, and the structural complexity related to project organization (management) (Williams, 2002). On the one hand, a project is a temporary and transient organization surrounded by inherent uncertainty (Turner and Muller, 2003). The International Organization for Standardization (ISO) (2003) defines a project as “a unique process”. In other words, a project is intrinsically unique and strongly subject to its environment (Zwikael et al., 2005). Geraldi, 2008 and Geraldi and Adlbrecht, 2008 speak of “Complexity of Faith” to describe this kind of project complexity that involves high levels of uncertainty. On the other hand, the project manager can be confronted with another form of complexity involved in dealing with a large volume of independent information. Geraldi, 2008 and Geraldi and Adlbrecht, 2008 speak of “complexity of fact” to describe the potentially very great amount of information to analyze and coordinate, linked to the number of people and companies involved. Both practitioners and academics have difficulties accepting and treating projects as complex systems, and tend to reduce the management of projects to the application of tools such as PERT, WBS, earned value, etc. (Geraldi and Adlbrecht, 2008). When complexity becomes too great, the possibilities and interrelations become so fuzzy that the system has to be assisted by appropriate tools and skills. Consequently, managers facing complex project need access to a decision-making aid model based on relevant performance evaluation. In this situation modeling plays an important role in project management in supporting “complex” decisions. Modeling is often presented as a simplification of reality (Pidd, 1996) and this simplification is a powerful advantage. This enables us to analyze and come to simplified conclusions about the real world which would be impossible to reach if we had to deal with all the complexity of the real world (Williams, 2002). So, the key purpose of modeling is to help decision-makers take a better decision. In a project context, decision making is the point where many management constraints converge from: – senior management: that define general project objectives and success criteria; – the quantity of information stemming from the project execution; – the project manager's own management policy that reflects her/his point of view and the value s/he attributes to each element of information and each objective. This study is not focused on the objectives definition. For a given project, we suppose they have been defined and adapted to each decisional level (senior managers, project managers, task leaders, etc.). In this paper, we address the problem of modeling project performance in order to support decision making. We face two main questions if we are to achieve this goal: (i) how to build a model that allows a large quantity of information (performance measurements) to be stored and easily available for consultation and/or modification; (ii) which tool or operator to use to analyze data according to decision-maker position/perception. For the first question, we propose to design a Project Performance Measurement System (PPMS) that uses good practices from literature in terms of project performance. Then, data from the PPMS cube are analyzed using a tool called MACBETH in order to propose decision aid; that is examined in the second question. We will start by detailing the scope of the study and the research methodology we used before presenting our problems statement. Second, we will look at the relevant good practices from the literature concerning the main elements to consider for each problem statement we have identified. Third, we will describe our PPMS and the uses made of MACBETH. The proposed system will be implemented using a case study, before finally drawing some conclusions and discussing the limitations and the various perspectives for further research.

Today, project decision-makers have to take into account a large amount of variables in their activities. Measuring then evaluating the project progression in all its aspects helps managers to make their decisions. But, in several contexts this evaluation is characterized by the complexity of information, the actors involved and their interrelations. Basically, project performance reports are based on working-level data but are intended to provide an overview of current trends and status. Project status is a snapshot of “where you are now” compared to “where you should be”. Status variation is the gap between actual performance and baseline. The final answer to initially expressed goals is certainly essential, but analysis of the path followed and the choices made are important if we are to be sure of reaching, or at least moving closer to, these goals. Consequently, we have proposed a multi-dimensional PPMS, which integrates the unique character of each project (tasks, objectives, decision-makers personality and competences), several good practices in terms of universal project management dimensions on the one hand, and in terms of performance analysis on the other hand. By making the assumption of one-dimensional utility and using MACBETH techniques our proposition allows to give principal guidance's to project manager to make decisions at each step of project management. This performance analysis can be reapplied as soon as required. The case study illustrates that using our model and MACBETH means that decision-makers avoid being swamped in a mass of irrelevant details and information. The information is chosen according to the decision-maker's interests and preferences. However, the case study presented shows that the project has to be of major scope and sufficiently well structured to be of interest when using this method. In addition, we could improve the use of the sensitivity analysis offered by MACBETH. The concrete measures of performance can be attenuated or increased by the sensitivity of the decision-maker. In other terms, the “subjectivity” of the model would have been measured and used to support decisions made by “skeptical” project managers. It involves a multi-run utilization of the method. Furthermore, many perspectives arise directly from this work. The four main areas of study that we could explore center on: – the robustness of using MACBETH, especially in projects with many tasks and dimensions to manage; – the impact of performance indicator interdependencies on the proposition; – links between research into project classification and choices for relative KPI weighting; – the possibility of cross-aggregated analysis oriented in pairs could be studied. It could be relevant for several functions, such as Risk Manager or Financial Director. To finish, we would like to add one final perspective. Performance control is a repetitive, cyclic, process (Navon, 2007). It starts with measurement of the actual performance of the project, i.e. determining the progress, measuring the costs engaged, etc. The actual performance is compared to the desired one. When a deviation is detected, the management team analyzes the reasons for it. Initially, the desired performance is the planned one. But, as the project progresses, planned performance may be updated and changed to reflect any decisions taken and/or events that occur. This approach is called adaptive control. Today, the scope of the proposed PPMS is limited to this step (an a posteriori performance evaluation). However, the last step of performance control is the implementation of corrective actions (Navon, 2007). The literature offers several methods for forecasting final project cost, based on actual cost performance at intermediate points in time (Hyväri, 2006). Earned Value, for example, is a quantitative approach to evaluating the true performance of a project both in terms of cost deviation and schedule deviation. Other methods allow forecasts of project status in terms of quality or time (Hyväri, 2006). However, we did not find any references that simultaneously attempt to forecast project outputs for all the dimensions (especially for cost, time and quality). Development could therefore be envisaged as a tool to forecast the global position (considering all dimensions: cost, time and quality factors at a minimum) of a project at the next period. This final prospect clearly points to an evolution of our work towards an a priori project performance evaluation.