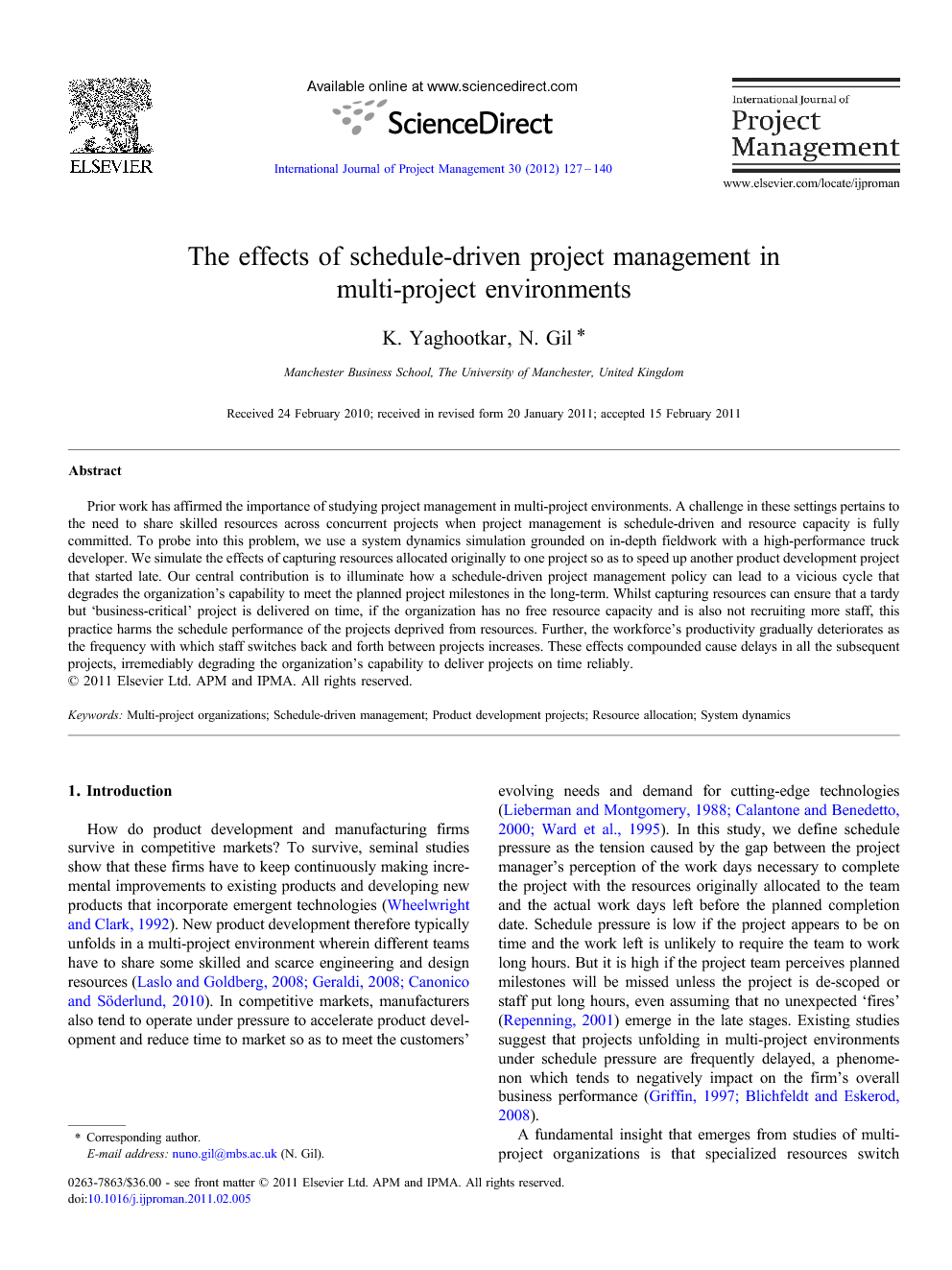 Prior work has affirmed the importance of studying project management in multi-project environments. A challenge in these settings pertains to the need to share skilled resources across concurrent projects when project management is schedule-driven and resource capacity is fully committed. To probe into this problem, we use a system dynamics simulation grounded on in-depth fieldwork with a high-performance truck developer. We simulate the effects of capturing resources allocated originally to one project so as to speed up another product development project that started late. Our central contribution is to illuminate how a schedule-driven project management policy can lead to a vicious cycle that degrades the organization's capability to meet the planned project milestones in the long-term. Whilst capturing resources can ensure that a tardy but ‘business-critical’ project is delivered on time, if the organization has no free resource capacity and is also not recruiting more staff, this practice harms the schedule performance of the projects deprived from resources. Further, the workforce's productivity gradually deteriorates as the frequency with which staff switches back and forth between projects increases. These effects compounded cause delays in all the subsequent projects, irremediably degrading the organization's capability to deliver projects on time reliably.

How do product development and manufacturing firms survive in competitive markets? To survive, seminal studies show that these firms have to keep continuously making incremental improvements to existing products and developing new products that incorporate emergent technologies (Wheelwright and Clark, 1992). New product development therefore typically unfolds in a multi-project environment wherein different teams have to share some skilled and scarce engineering and design resources (Laslo and Goldberg, 2008, Geraldi, 2008 and Canonico and Söderlund, 2010). In competitive markets, manufacturers also tend to operate under pressure to accelerate product development and reduce time to market so as to meet the customers' evolving needs and demand for cutting-edge technologies (Lieberman and Montgomery, 1988, Calantone and Benedetto, 2000 and Ward et al., 1995). In this study, we define schedule pressure as the tension caused by the gap between the project manager's perception of the work days necessary to complete the project with the resources originally allocated to the team and the actual work days left before the planned completion date. Schedule pressure is low if the project appears to be on time and the work left is unlikely to require the team to work long hours. But it is high if the project team perceives planned milestones will be missed unless the project is de-scoped or staff put long hours, even assuming that no unexpected ‘fires’ (Repenning, 2001) emerge in the late stages. Existing studies suggest that projects unfolding in multi-project environments under schedule pressure are frequently delayed, a phenomenon which tends to negatively impact on the firm's overall business performance (Griffin, 1997 and Blichfeldt and Eskerod, 2008). A fundamental insight that emerges from studies of multi-project organizations is that specialized resources switch frequently between projects in these settings, and this is a root cause of schedule pressure (Geraldi, 2008, Kaulio, 2008, Laslo and Goldberg, 2008, Jonas, 2010 and Canonico and Söderlund, 2010). In particular, top management may find it attractive to capture resources from other concurrent projects so as to accelerate a business-critical project that started late if the organization has no free capacity in terms of specialized resources and is not hiring new staff, or the organization is finding it difficult to recruit new staff with adequate skills (Yaghootkar, 2010). In the short-term, the bold practice of capturing resources from a concurrent project can be effective to ensure that the project deemed ‘more important’ finishes on time. However, increasing the size of a project team to attempt to speed up project delivery is notorious for decreasing productivity (Brooks, 1995). Work productivity also deteriorates because learning curves get disrupted as resources switch back and forth between projects (Abdel-Hamid, 1988). These insights leave open, however, the central issue addressed here. Specifically, we ask: ‘which are the long-term effects of schedule-driven project management sustained by a resource capturing practice in a multi-project organization when there is no free resource capacity?’ Our research design is a longitudinal, experiential simulation of a multi-project organization in which a resource capturing practice is used to implement a schedule-driven project management policy. Our computer-simulated environment is grounded on in-depth fieldwork with the product development organization of a manufacturer for high-performance trucks. We assume that, first, there is no free resource capacity; second, skilled staff are not being recruited; and third, productivity declines when resources switch back and forth between concurrent projects. Our simulation includes various scenarios that increase deliberately the initial delay in starting a project deemed ‘business-critical’. Due to the schedule-driven project management policy, these delays increase the frequency with which resources switch between concurrent projects. Our central contribution is to illuminate the short-term logic and long-term detrimental effects of decisions to capture resources allocated to other concurrent projects. In the short-term, this policy ensures that a tardy project can be delivered on time. This can be business-critical, for example, when the business faces the prospect of significant loss of anticipated revenues if the project output fails to reach the market before a pre-determined calendar date or before a competitor reaches the market with a similar product. Ensuring that some projects finish on time can also be business-critical if a contract with a third-party imposes significant penalties for delays. In the long-term, we show that a resource capturing practice in an environment without free capacity puts the concurrent projects under schedule pressure in a ripple effect. Assuming productivity deteriorates as resources move across projects routinely in agreement with existing studies, we show that schedule-driven management with resource capturing exacerbates schedule pressure in a self-reinforcing vicious cycle, generating a persistent steady state that degrades the organization's capability to deliver projects on time reliably.