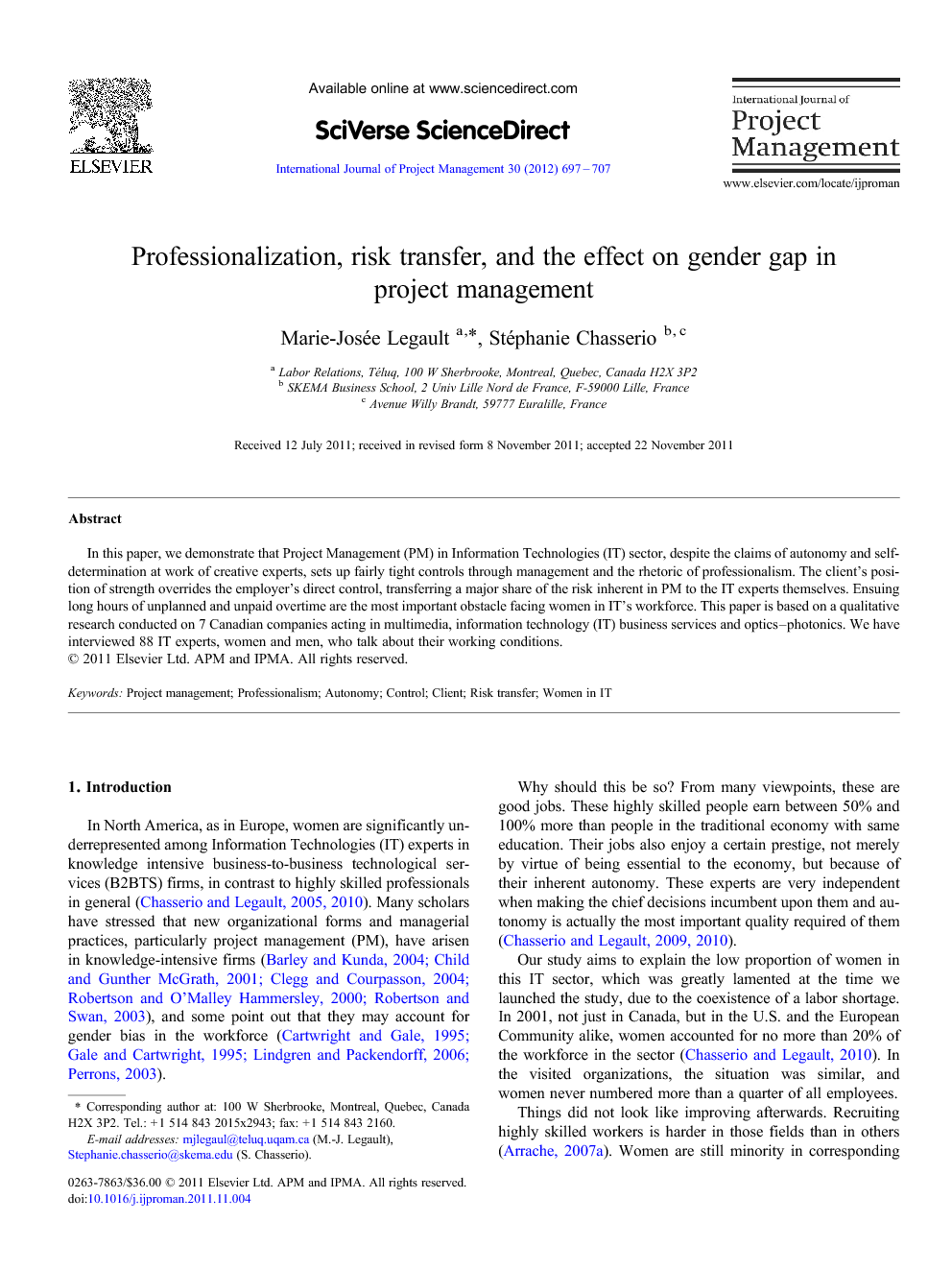 In this paper, we demonstrate that Project Management (PM) in Information Technologies (IT) sector, despite the claims of autonomy and self-determination at work of creative experts, sets up fairly tight controls through management and the rhetoric of professionalism. The client's position of strength overrides the employer's direct control, transferring a major share of the risk inherent in PM to the IT experts themselves. Ensuing long hours of unplanned and unpaid overtime are the most important obstacle facing women in IT's workforce. This paper is based on a qualitative research conducted on 7 Canadian companies acting in multimedia, information technology (IT) business services and optics–photonics. We have interviewed 88 IT experts, women and men, who talk about their working conditions.

In North America, as in Europe, women are significantly underrepresented among Information Technologies (IT) experts in knowledge intensive business-to-business technological services (B2BTS) firms, in contrast to highly skilled professionals in general (Chasserio and Legault, 2005 and Chasserio and Legault, 2010). Many scholars have stressed that new organizational forms and managerial practices, particularly project management (PM), have arisen in knowledge-intensive firms (Barley and Kunda, 2004, Child and Gunther McGrath, 2001, Clegg and Courpasson, 2004, Robertson and O'Malley Hammersley, 2000 and Robertson and Swan, 2003), and some point out that they may account for gender bias in the workforce (Cartwright and Gale, 1995, Gale and Cartwright, 1995, Lindgren and Packendorff, 2006 and Perrons, 2003). Why should this be so? From many viewpoints, these are good jobs. These highly skilled people earn between 50% and 100% more than people in the traditional economy with same education. Their jobs also enjoy a certain prestige, not merely by virtue of being essential to the economy, but because of their inherent autonomy. These experts are very independent when making the chief decisions incumbent upon them and autonomy is actually the most important quality required of them (Chasserio and Legault, 2009 and Chasserio and Legault, 2010). Our study aims to explain the low proportion of women in this IT sector, which was greatly lamented at the time we launched the study, due to the coexistence of a labor shortage. In 2001, not just in Canada, but in the U.S. and the European Community alike, women accounted for no more than 20% of the workforce in the sector (Chasserio and Legault, 2010). In the visited organizations, the situation was similar, and women never numbered more than a quarter of all employees. Things did not look like improving afterwards. Recruiting highly skilled workers is harder in those fields than in others (Arrache, 2007a). Women are still minority in corresponding training programs (Arrache, 2007b), but this cannot account for all, as any employer fails to retaining those who were hired. According to a North American study by the Center for Work-Life Policy, 74% of women in technology report “loving their work,” yet these women leave their careers at a staggering rate: 56% of technical women leave at the “mid-level” point just when the loss of their talent is most costly to companies (Ashcraft and Blithe, 2009:11). The study of work-life balance in this segment of the labor market sheds light on the wider canvas of human resource (HR) management practices in this part of the so-called new economy and helps explain this social phenomenon. Our paper demonstrates that PM in the IT sector, despite the claims of creative autonomy at work for skilled workers, actually sets up fairly tight controls, not just through management, but through the rhetoric of professionalism. These means render the experts' autonomy merely operational. The client's position of strength overrides the employer's direct control of working hours, transferring a major share of the risk inherent in PM to the IT experts themselves. As a consequence of this transfer, experts are held responsible of the projects' success while having no control on the constraints of the “iron triangle”; yet, these constraints are usually negotiated very tightly in a highly competitive context. Experts are thus subjected to high pressure to work very long hours, as this remains the only locus of flexibility. Long hours are the most important obstacle facing women in IT's workforce and can account for their scarcity (noted both in social sciences literature and among our research sites); worst, women as an end result are seen as unable to meet the so-defined “professional” standards of PM.

We have seen how a number of factors come together to resolve the conflict between workers' autonomy and managers' control in PM. In PM indeed, a very tight framework is set in place, made of time, budget and characteristics of the object ordered (scope), quite well called the iron triangle of PM. Though management has to save a space of autonomy for creative activity, it has to ensure deliverables to be delivered and, ultimately, it has to control. Managers first negotiate very tight conditions in contracts that set up a rigorous frame for experts to execute “autonomously”. Then these experts have to satisfy a client in a process in which they will be judged on results, though paid a fixed wage. Such an ambiguous situation drives them into an entrepreneur-like commitment behavior, while they are not shareholders nor promised any bonus. PMBOK sets up a mixture of management of the self practices that influence experts' autonomous decision process (for instance, provides rationalization like the uttermost importance of commitment to induce consent to unlimited and unpaid overtime) and tight control over these decisions to make sure ends will meet. The IT experts exercise their narrow discretionary power in the client's interests, because although they do not assume the financial risk of failure, they risk their own reputation and employability. The client (or a representative) is present at each stage of the project and the expert deals with him or her without the intermediation or protection of the HR department. Direct control of IT experts' microbehaviors and microdecisions is ensured through planning meetings, but they alone are not enough to mitigate the uncertainty inherent in PM. The primary risk in this environment is missing the project deadline or running over budget, which IT experts seek to avert by working as many hours as necessary with no guarantee of compensation. An inexpensive behavior-control system, based on the rhetoric of professionalism, generates self-discipline and self-censorship of the need for time off. There is no anomie in the workplace, just strict, highly efficient control and extraordinary commitment. Portfolio makes a reputation and reputation is the main asset in job hunting and negotiating wages. As mobility is inherent in B2BTS, pleasing client is more important than pleasing management. The client's strong regulating power shifts a large share of the risk inherent in PM onto the IT experts (Chasserio and Legault, 2009). By these means, the experts' autonomy is rendered merely operational, and a significant amount of the tension between autonomy and control is resolved, because the experts feel deeply that they themselves are the ones deciding to invest the hours required to complete the project successfully. And so a logic that has a serious impact on women pervades these workplaces: – Women, more than men, would like to limit their working hours, often so they can take care of their children. – But working hours and presenteeism are indicators of job commitment. – And commitment is an important factor in promotion. Consequently, even in times of labor shortage, women account for no more than a quarter of the workforce in the sector, including bureaucracies. PM does not challenge the sociosexual order of social relations between men and women in any way. Instead, traditional gendered patterns are reproduced in the projectified workplace, where the ideal worker still appears to be a young man fully dedicated to his job. Private life or family appears largely neglected in these workplaces. Unlike Lindgren and Packendorff (2006), we would not conclude that PM is a male form of organization per se. Of course, according to analyses of gendered logic systems in the Project Management Body of Knowledge (PMBoK) and of its powerful effect in generating isomorphic forces to influence behaviors among PM professionals ( Buckle and Thomas, 2003 and Thomas and Buckle-Henning, 2007), we can acknowledge that what's identified as a masculine logic system and masculine behavior are conceived as valuable resources to project managers and that there's a gendered discourse operating within the profession. Interestingly, those analyses conclude that 1) an important part of the same PMBoK holds so-called “feminine skills” in high esteem 2) that both sets of skills are necessary to succeed in PM and that 3) men and women as well can display so-called masculine or feminine skills ( Buckle and Thomas, 2003 and Thomas and Buckle-Henning, 2007). Nevertheless, the theoretical framework that leads to this sort of conclusion often take for granted undefined, unquestioned male and female categories that, though reflecting “commonly observed and empirically verified managerial behaviors in work environments” (Buckle and Thomas, 2003:435), can too quickly turn into nature-grounded categories. Such thinking is typical of essentialism, which sees gender differences as inherent and grounded in nature. The underlying assumption is that women, more than men, need time for themselves, for family life, and that whether naturally or socially, it is up to them to take care of the home and children. To us, there's a risk in making feminine nature responsible for women's scarcity in IT sector; such an assumption takes for granted a socially constructed division of domestic work and overshadows social and health costs of such a work environment for men and their families (Burke, 2009, Burke and Fiksenbaum, 2009, Campbell, 2002a and Campbell, 2002bDembe, 2009, Jacobs and Gerson, 2001 and Kanai, 2009). If, as Carnoy (2002) has said, the ideal worker works without sleeping, eating or drinking, having children or seeing his/her children, or socializing, and if, incidentally, men manage to do it, it is not because the PM form of organization is “male”, but because it is based on the sexual division of labor. As women are still chiefly responsible for child care and housework, they are the ones who lament the demands of unlimited overtime and refuse to accede to them. They are thus excluded from the “projectification” of society, with its highly paid, prestigious jobs. At the same time, women who are married to IT experts enable them to work long hours by scaling back their own labor market participation, thus assuming the risk inherent in these forms of domination and exploitation.