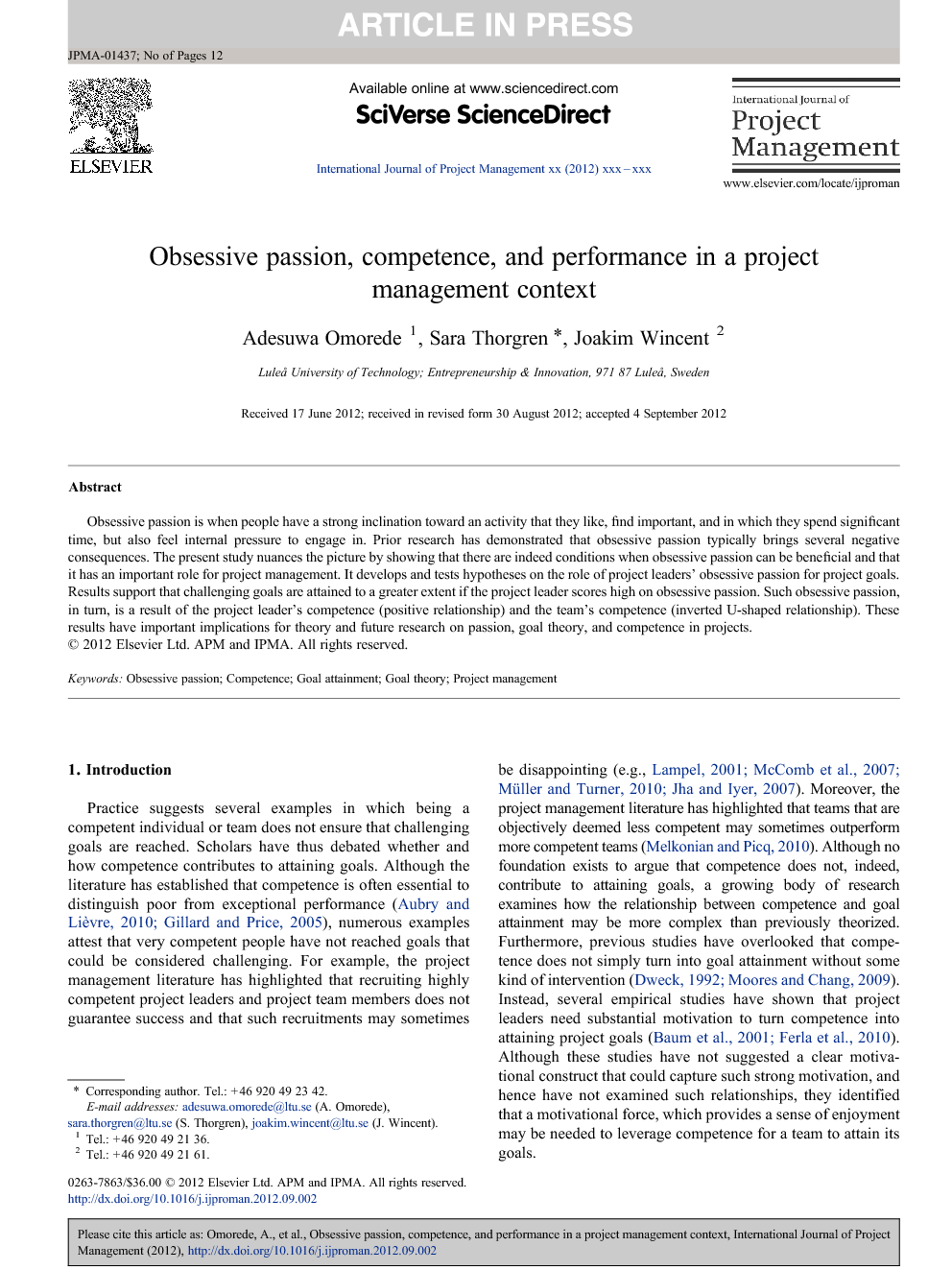 Practice suggests several examples in which being a competent individual or team does not ensure that challenging goals are reached. Scholars have thus debated whether and how competence contributes to attaining goals. Although the literature has established that competence is often essential to distinguish poor from exceptional performance (Aubry and Lièvre, 2010 and Gillard and Price, 2005), numerous examples attest that very competent people have not reached goals that could be considered challenging. For example, the project management literature has highlighted that recruiting highly competent project leaders and project team members does not guarantee success and that such recruitments may sometimes be disappointing (e.g., Lampel, 2001, McComb et al., 2007, Müller and Turner, 2010 and Jha and Iyer, 2007). Moreover, the project management literature has highlighted that teams that are objectively deemed less competent may sometimes outperform more competent teams (Melkonian and Picq, 2010). Although no foundation exists to argue that competence does not, indeed, contribute to attaining goals, a growing body of research examines how the relationship between competence and goal attainment may be more complex than previously theorized. Furthermore, previous studies have overlooked that competence does not simply turn into goal attainment without some kind of intervention (Dweck, 1992 and Moores and Chang, 2009). Instead, several empirical studies have shown that project leaders need substantial motivation to turn competence into attaining project goals (Baum et al., 2001 and Ferla et al., 2010). Although these studies have not suggested a clear motivational construct that could capture such strong motivation, and hence have not examined such relationships, they identified that a motivational force, which provides a sense of enjoyment may be needed to leverage competence for a team to attain its goals. With the present study, we introduce and acknowledge the strong motivation embodied in the obsessive passion construct (e.g., Bonneville-Roussy et al., 2011, Philippe et al., 2010 and Vallerand et al., 2003). We also test the relevance of obsessive passion for capturing the often-argued necessary motivation of project leaders. The social psychology research on obsessive passion—defined as an uncontrollable urge to take part in an activity—has concentrated on how the experience of obsessive passion impacts the way people behave in goal processes (Vallerand et al., 2008). The relationships among competence, obsessive passion, and goal attainment have not been tested directly (Cardon et al., 2009 and Thorgren and Wincent, in press), yet advancements in this stream of research and the general arguments of goal-setting-theory (Locke and Latham, 2002 and Locke and Latham, 2006) lead us to suspect that obsessive passion may be one of the factors that play a key role in the relationship between competence and attaining goals. By conceptually developing and empirically testing hypotheses regarding the unexamined positive side of obsessive passion that may transfer competence to attaining goals in projects, this research provides preliminary answers to the following questions: Why is competence not positively linked to the attaining of project goals in some situations? Why can project teams with lower levels of experience sometimes reach challenging goals more effectively than teams with higher levels of competence? What is the value of project team competence in the absence of a highly motivated project leader? Using multi-source longitudinal data from 134 large European Union projects, we test a set of hypotheses to produce plausible answers to these questions. Specifically, we first explain how both the project leader's competence and the team members' competence influence how much obsessive passion the project leader experiences. Here we suggest that the relationship is positive, but is characterized by diminishing returns, meaning that at a certain point the competence may create conditions for reduced obsessive passion in the project leader. This is consistent with commonly argued “experience effects,” suggesting that too much competence may reduce motivation (Peterson, 2007 and Mikulas and Vodanovich, 1993). Our tests show that there are no direct effects of competence on attaining goals, but instead support the argument that obsessive passion is important for mediating the competence effects on attaining goals, especially when goals are challenging. Fig. 1 illustrates the hypothesized framework of the relationships this research examines. As shown, we elaborate on a mediated moderation framework in which we posit that obsessive passion plays a central role in facilitating goal attainment in projects with particularly challenging goals.