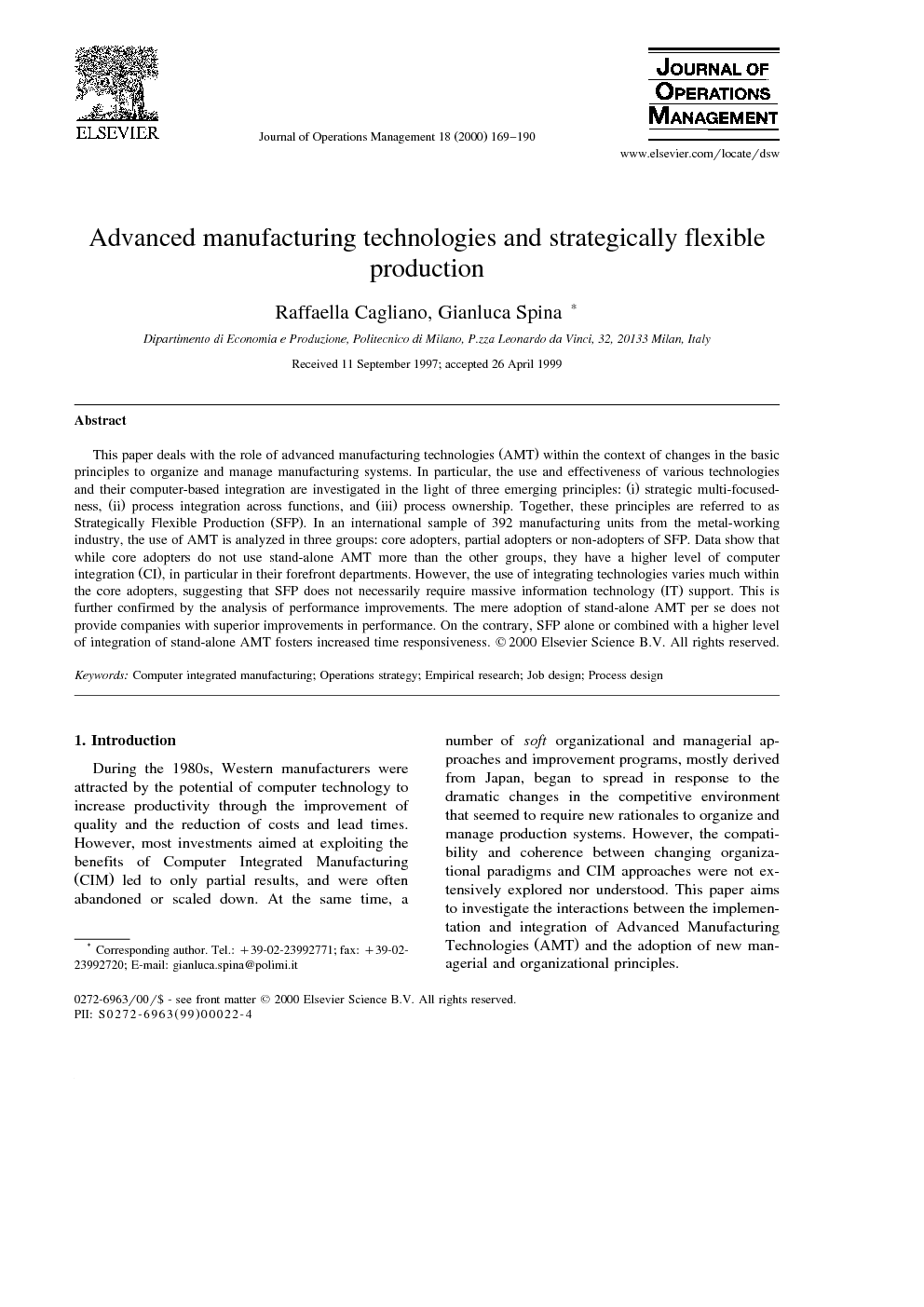 This paper deals with the role of advanced manufacturing technologies (AMT) within the context of changes in the basic principles to organize and manage manufacturing systems. In particular, the use and effectiveness of various technologies and their computer-based integration are investigated in the light of three emerging principles: (i) strategic multi-focusedness, (ii) process integration across functions, and (iii) process ownership. Together, these principles are referred to as Strategically Flexible Production (SFP). In an international sample of 392 manufacturing units from the metal-working industry, the use of AMT is analyzed in three groups: core adopters, partial adopters or non-adopters of SFP. Data show that while core adopters do not use stand-alone AMT more than the other groups, they have a higher level of computer integration (CI), in particular in their forefront departments. However, the use of integrating technologies varies much within the core adopters, suggesting that SFP does not necessarily require massive information technology (IT) support. This is further confirmed by the analysis of performance improvements. The mere adoption of stand-alone AMT per se does not provide companies with superior improvements in performance. On the contrary, SFP alone or combined with a higher level of integration of stand-alone AMT fosters increased time responsiveness.

During the 1980s, Western manufacturers were attracted by the potential of computer technology to increase productivity through the improvement of quality and the reduction of costs and lead times. However, most investments aimed at exploiting the benefits of Computer Integrated Manufacturing (CIM) led to only partial results, and were often abandoned or scaled down. At the same time, a number of soft organizational and managerial approaches and improvement programs, mostly derived from Japan, began to spread in response to the dramatic changes in the competitive environment that seemed to require new rationales to organize and manage production systems. However, the compatibility and coherence between changing organizational paradigms and CIM approaches were not extensively explored nor understood. This paper aims to investigate the interactions between the implementation and integration of Advanced Manufacturing Technologies (AMT) and the adoption of new managerial and organizational principles. The study is organized as follows. Section 2presents research background, including the decline of CIM, the shift in the rationales of production management, and the need to rethink the use of AMT; Section 3details research hypotheses; Section 4illustrates the methodology and the sample; and Section 5reports the data analyses and discusses the major findings. Finally, Section 6summarizes and considers future research.

This paper is centered on the broad debate of the role of AMT within the paradigmatic changes in manufacturing systems. In an attempt to extend knowledge in this field further we have conducted an extensive empirical study of the intensity of use and the effectiveness of AMT with respect to the adoption of three emerging principles in manufacturing systems organization and management: (i) multi-focusedness and strategic flexibility; (ii) process integration across functions; and (iii) process ownership. Together, these are referred to as SFP. A vast body of literature supports the idea that the adoption per se of different computer-based technologies does not provide companies with greater ability to improve manufacturing performance. This finding is also supported by the present study. Obviously, this does not mean that world-class manufacturing can be achieved without any computer-based support. Rather, it provides indirect confirmation of the need to re-shape the concept of CIM as it evolved in the eighties and early nineties in line with emerging organizational and managerial rationales that have proved to be effective. In this paper we have investigated how the adoption of SFP influences the use and the effectiveness of various AMT and their integration. Our data show that while core adopters of SFP do not use computerized equipment and software applications more than other units, they show a greater level of CI, in particular in their forefront departments. However, the use of integrating technologies varies considerably within core adopters. This suggests that firms that implement advanced organizational practices not always perceive extensive automation and IT-based integration as the primary source of innovation, even though various AMT, together with organizational innovations, are often adopted successfully within the broader context of different manufacturing strategies. This finding is also confirmed by the analysis of performance improvements. Technology alone does not provide companies with better overall performance, as revealed by the data in Table 10, but the joint use of technological and organizational innovation can have an effect on several performance measures. However, high levels of performance improvement are not necessarily reached through extensive automation and IT-based integration. Clearly, such findings do not provide a complete understanding of the way emerging organizational principles for manufacturing systems re-shape the use of AMT. A major limitation of our research is that the available data do not allow detailed analysis of whether core adopters of SFP arrange AMT differently with respect to key issues, such as IT architecture, data management and access, change management, and the empowerment of the workforce. However, some managerial implications do emerge, such as the following. ⋅ Massive automation alone is not necessarily required in order to achieve performance improvements, since there are excellent manufacturers who effectively pursue strategic multi-focusedness, integrate their business processes and develop process ownership without relying on company-wide use of computerized applications. ⋅ Integration of stand-alone AMT should be accompanied by an orientation towards SFP; in fact, CI alone has a limited independent effect on performance improvements and only on product variety. It would appear that networking stand-alone AMT should be implemented in the light of SFP, i.e., with (i) a “process view” rather than functional perspective and (ii) the development of process ownership (delegation, empowerment, involvement, re-skilling, etc.) in order to support (iii) strategic multi-focusedness and flexibility. This is consistent with recent findings linking the efficacy of CIM investments to customer focus (Brynjolfsson and Hitt, 1995) and recognizing that CIM effectiveness is moderated by the integration of jobs, strategies and partners within the supply chain (Parthasharty and Yin, 1996), or by infrastructural improvement programs, such as quality leadership, worker empowerment and soft integration (Boyer et al., 1997). Further research is needed to overcome the major limitations of this study. In particular, investigation of the qualitative aspects of AMT implementation which go beyond the mere quantitative measure of companies' “technological intensity” will support a deeper understanding of how SFP and AMT combine and interact to provide superior performance. Such work should substantiate the above recommendations, which at present are still tentative. Research based on case studies has recently addressed this issue, and guidelines and interpretation have been proposed (e.g., Vonderembse et al., 1997). However, these preliminary findings should be extended with broader evidence from survey studies.