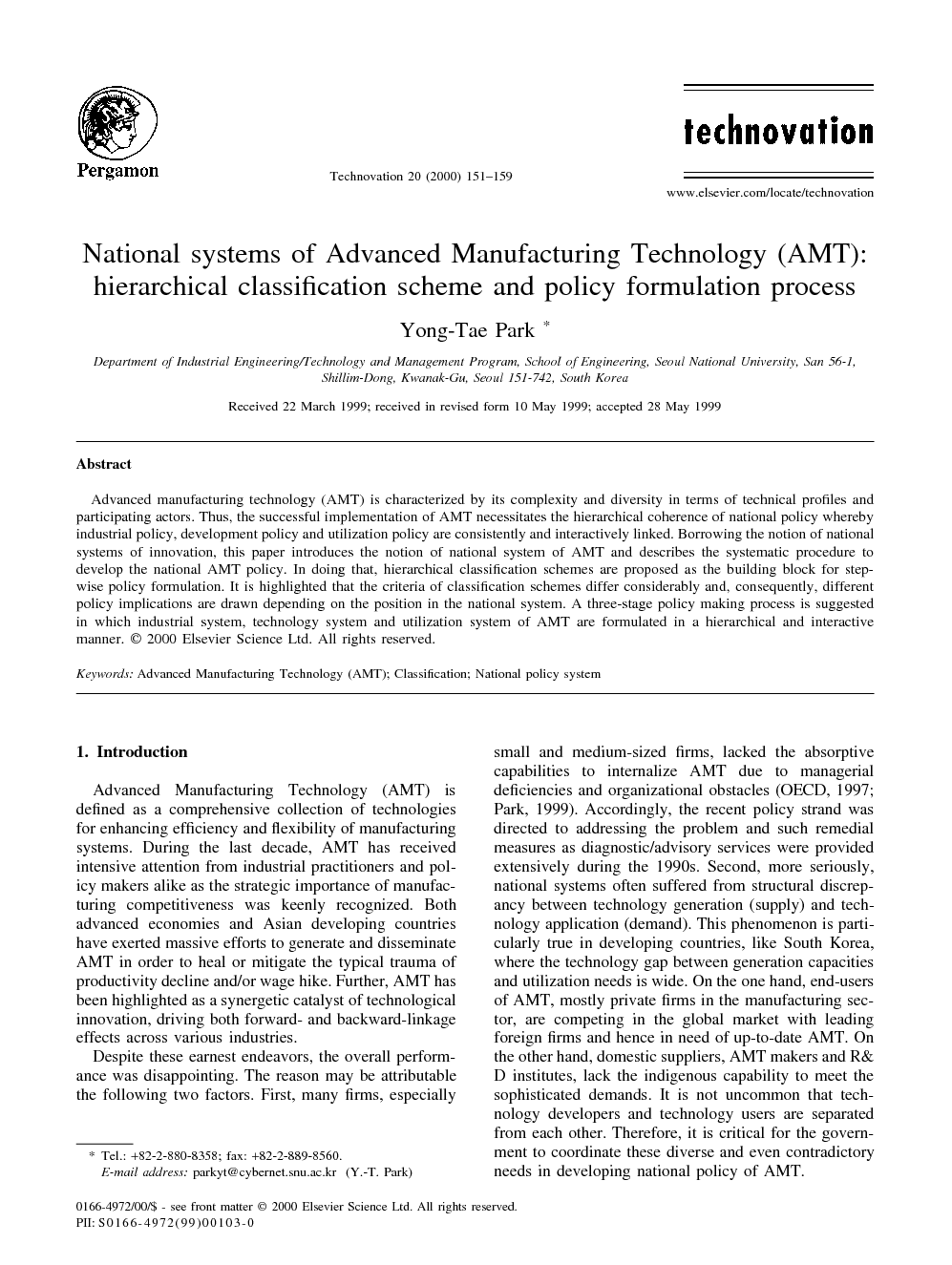 Advanced manufacturing technology (AMT) is characterized by its complexity and diversity in terms of technical profiles and participating actors. Thus, the successful implementation of AMT necessitates the hierarchical coherence of national policy whereby industrial policy, development policy and utilization policy are consistently and interactively linked. Borrowing the notion of national systems of innovation, this paper introduces the notion of national system of AMT and describes the systematic procedure to develop the national AMT policy. In doing that, hierarchical classification schemes are proposed as the building block for step-wise policy formulation. It is highlighted that the criteria of classification schemes differ considerably and, consequently, different policy implications are drawn depending on the position in the national system. A three-stage policy making process is suggested in which industrial system, technology system and utilization system of AMT are formulated in a hierarchical and interactive manner.

Advanced Manufacturing Technology (AMT) is defined as a comprehensive collection of technologies for enhancing efficiency and flexibility of manufacturing systems. During the last decade, AMT has received intensive attention from industrial practitioners and policy makers alike as the strategic importance of manufacturing competitiveness was keenly recognized. Both advanced economies and Asian developing countries have exerted massive efforts to generate and disseminate AMT in order to heal or mitigate the typical trauma of productivity decline and/or wage hike. Further, AMT has been highlighted as a synergetic catalyst of technological innovation, driving both forward- and backward-linkage effects across various industries. Despite these earnest endeavors, the overall performance was disappointing. The reason may be attributable the following two factors. First, many firms, especially small and medium-sized firms, lacked the absorptive capabilities to internalize AMT due to managerial deficiencies and organizational obstacles (OECD, 1997 and Park, 1999). Accordingly, the recent policy strand was directed to addressing the problem and such remedial measures as diagnostic/advisory services were provided extensively during the 1990s. Second, more seriously, national systems often suffered from structural discrepancy between technology generation (supply) and technology application (demand). This phenomenon is particularly true in developing countries, like South Korea, where the technology gap between generation capacities and utilization needs is wide. On the one hand, end-users of AMT, mostly private firms in the manufacturing sector, are competing in the global market with leading foreign firms and hence in need of up-to-date AMT. On the other hand, domestic suppliers, AMT makers and R&D institutes, lack the indigenous capability to meet the sophisticated demands. It is not uncommon that technology developers and technology users are separated from each other. Therefore, it is critical for the government to coordinate these diverse and even contradictory needs in developing national policy of AMT. This issue, however, remains a largely gray zone in research and policy practice. This article presents a systematic procedure to formulate the national policy of AMT. It represents the output of a preliminary study that serves as the blueprint of the large-scale policy formulation. The purpose of this article is not to report a detailed experience of real-world practice but to suggest an illustrative framework for prospective policy making. First, by borrowing the notion of national systems of innovation (NSI), the basic structure of national system of AMT is proposed. Second, based on the national system, hierarchical classification schemes of AMT are presented as a building block for formulating the national plan. Third, policy implications of classification are discussed. Finally, the overall framework of national AMT policy is suggested.

The success of AMT policy necessitates the strategic linkage between technology supply and technology demand. To this end, we present the notion of national systems of AMT and emphasize the hierarchical coherence among industrial policy, development policy and utilization policy of AMT. As mentioned in the preceding sections, the planning process to construct the national systems of AMT calls upon the interactive and consistent link among these three policies. Specifically, the whole process is composed of three major stages. At the first stage, the industry–technology classification scheme furnishes the criteria for formulating industrial system of AMT. The strategic match between industrial structure and technological capabilities is prerequisite for this process. The second stage begins with the system–technology classification scheme. It is coupled with such successive activities as specification of system configuration, determination of integration direction, and construction of technology system of AMT. At the last stage, the process–technology classification scheme is devised. The supply–demand gap across industries is analyzed and the functional areas of utmost importance are identified. The last stage produces the process system of AMT. Fig. 7 delineates the flowchart of the three-stage process to formulate the national system of AMT. In carrying out this multi-stage project, the following two points should be emphasized. First, partnership among actors is crucial. A number of actors, representing both public and private sectors, should be involved. An open discussion in free atmosphere is indispensable. If necessary, intermediary experts may be employed as facilitators and catalysts. Second, the process in nature is a trial-and-error practice. Tentative plans are first proposed and successively revised until authorized plans are produced. As mentioned before, this paper is not an empirical report of a past or ongoing project but a guideline for prospective policy making. We will be applying this framework to an ensuing large-scale policy-making project of AMT. Due to its exploratory nature, it is acknowledged that some of the terminology is vague and conceptual. Furthermore, there is no way to quantify the positive impact of the proposed framework on the effectiveness of real-world policy making. Nonetheless, it is believed that the proposed framework will shed light on the systematic policy development of AMT. The coordination and integration of industrial policy, development policy and utilization policy is the prerequisite for policy making. The classification schemes can serve as a useful building block. Finally, the stage-wise approach facilitates a complicated process.