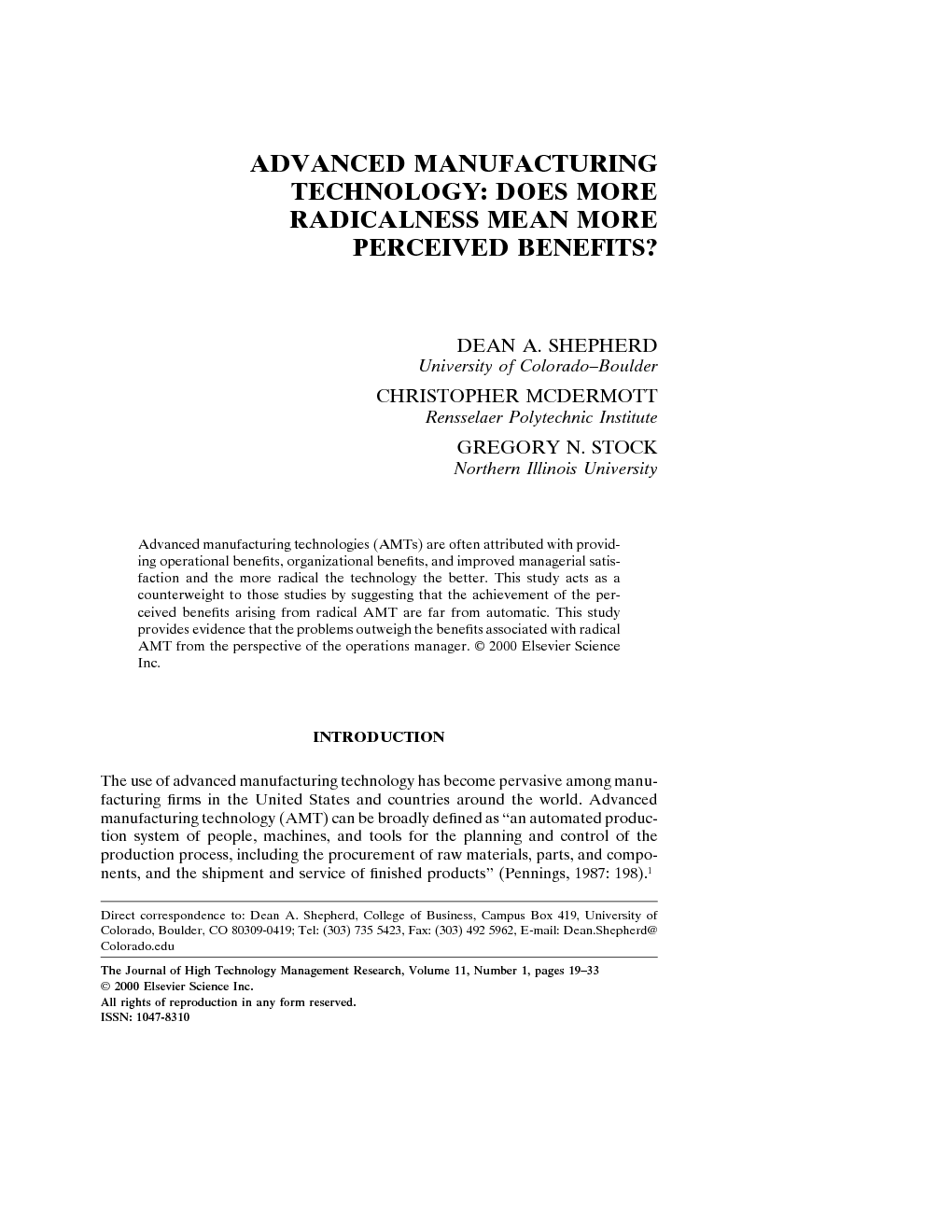 Advanced manufacturing technologies (AMTs) are often attributed with providing operational benefits, organizational benefits, and improved managerial satisfaction and the more radical the technology the better. This study acts as a counterweight to those studies by suggesting that the achievement of the perceived benefits arising from radical AMT are far from automatic. This study provides evidence that the problems outweigh the benefits associated with radical AMT from the perspective of the operations manager.

The use of advanced manufacturing technology has become pervasive among manufacturing firms in the United States and countries around the world. Advanced manufacturing technology (AMT) can be broadly defined as “an automated production system of people, machines, and tools for the planning and control of the production process, including the procurement of raw materials, parts, and components, and the shipment and service of finished products” (Pennings, 1987: 198).1 The combination of increased production flexibility and higher efficiency offered by AMTs directly contradicts the traditional paradigm of operations management and manufacturing strategy. In traditional thinking, efficiency is possible only in the production of large volumes of standard products, while customization is necessarily penalized with higher costs. These operational benefits increase the organization's options in the marketplace, and may ultimately provide advantages over competitors who have not implemented AMTs (Zairi, 1992). Even if AMT does not provide operational improvements it may still offer benefits with respect to organizational improvements and/or management (and worker) satisfaction. For example, the process of implementing AMT might lead to better communication, redesigned work flows, or better integration of work across functional boundaries (Zairi, 1992). These changes in communication and interaction may in turn result in greater satisfaction Etezadi-Amoli & Farhoomand 1996, de Pietro & Schremser 1987, Galleta & Lederer 1989, Gatian 1994 and Melone 1990. Although operational benefits, organizational benefits, and improved managerial satisfaction are often associated with AMTs, clearly all AMTs are not the same and do not provide the same benefits. Zammuto and O'Connor (1992), for example, argue that the success of AMT implementation is related to the organizational culture. Other factors are also likely to affect the relationship between AMT and performance—especially those that relate to the technology itself. It is well known that innovations come in varying degrees of complexity and levels of technological uncertainty Droge, Vickery & Markland 1994, Ettlie, et al. 1984 and Gaynor 1993. For example, incremental innovations are typically extensions to current product offerings or logical, and relatively minor, extensions to existing processes Dewar & Dutton 1986, Ettlie, et al. 1984, Henderson & Clark 1990 and Sanderson & Uzumeri 1997. On the other hand, radical innovations involve the development or application of significantly new technologies into previously nonexistent markets. Such characteristics associated with the level of radicalness of AMT might affect the level and type of benefits achieved by its implementation. Although the use of AMT and research about it has been the subject of a relatively large stream of literature, a large proportion of this literature consists of conceptual papers and case studies. These types of research are extremely important in helping to understand the phenomenon. However, the generalizability of single case study findings is often limited. In this study we investigate, both theoretically and empirically, the relationship between the radicalness of AMT and the perception of its associated benefits from the perspective of the person charged with its implementation (the operations manager). Unlike most research into the radicalness of technology, this study uses a multi-dimensional approach to operationalizing the constructs of perceived radicalness and benefits of technology. The remainder of the paper is organized as follows. First, the literature relating to the radicalness of technology and performance is reviewed and the nature of this relationship is hypothesized. Second, our methodological approach and sample are described. Third, our findings are presented. Finally, the results and their contribution to our understanding of the radicalness of AMT and its perceived benefits are discussed.

The importance of AMTs to organizations has been established over the last decade and a half. As time moves on, it is increasingly clear that these technologies are an integral part of the way a firm can compete. In this study, we explored the extent to which the perceived benefits of AMT were affected by the radicalness of the technologies themselves. We found significant support for the notion that as the radicalness of the technology goes up, the perceived benefits to the organization go down. In the above discussion, we have suggested that this may be due in part to the firms' predisposition of managing all innovations in a way that evolved from their knowledge of incremental change. This is obviously not the only plausible cause of this phenomenon. It may simply be that what we observed was the result of the inherent risks associated with managing in an arena of radical innovation: high risks and high potential returns. Regardless of the specific cause of these difficulties, our findings point to a clear need for more research into the process of radical technology implementation. For example, is the assessment of the benefits of AMT consistent across an organization's stakeholders? How do the operations manager's perception of the benefits of AMT compare with other members of the top management team, with major clients, with suppliers, and even with investors? This is particularly important in light of this study's finding that operations managers perceive negative benefits arising from more radical AMT. Are operations managers typically in favor of AMT only to find that when it comes to implementation that they were wrong? Or do they believe all along that the benefits of AMT are unlikely to materialize and their opinion was either not sought or ignored in the formulation stage? Such research into the process of formulating technological strategies might provide valuable insight into why so many organizations are pushing ahead with radical AMT while (it appears) operations managers believe its implementation provides negative outcomes. It would also be important to have an increased insight into the role reward systems and change management have on the perceived benefits of AMT. There is much research to be done.