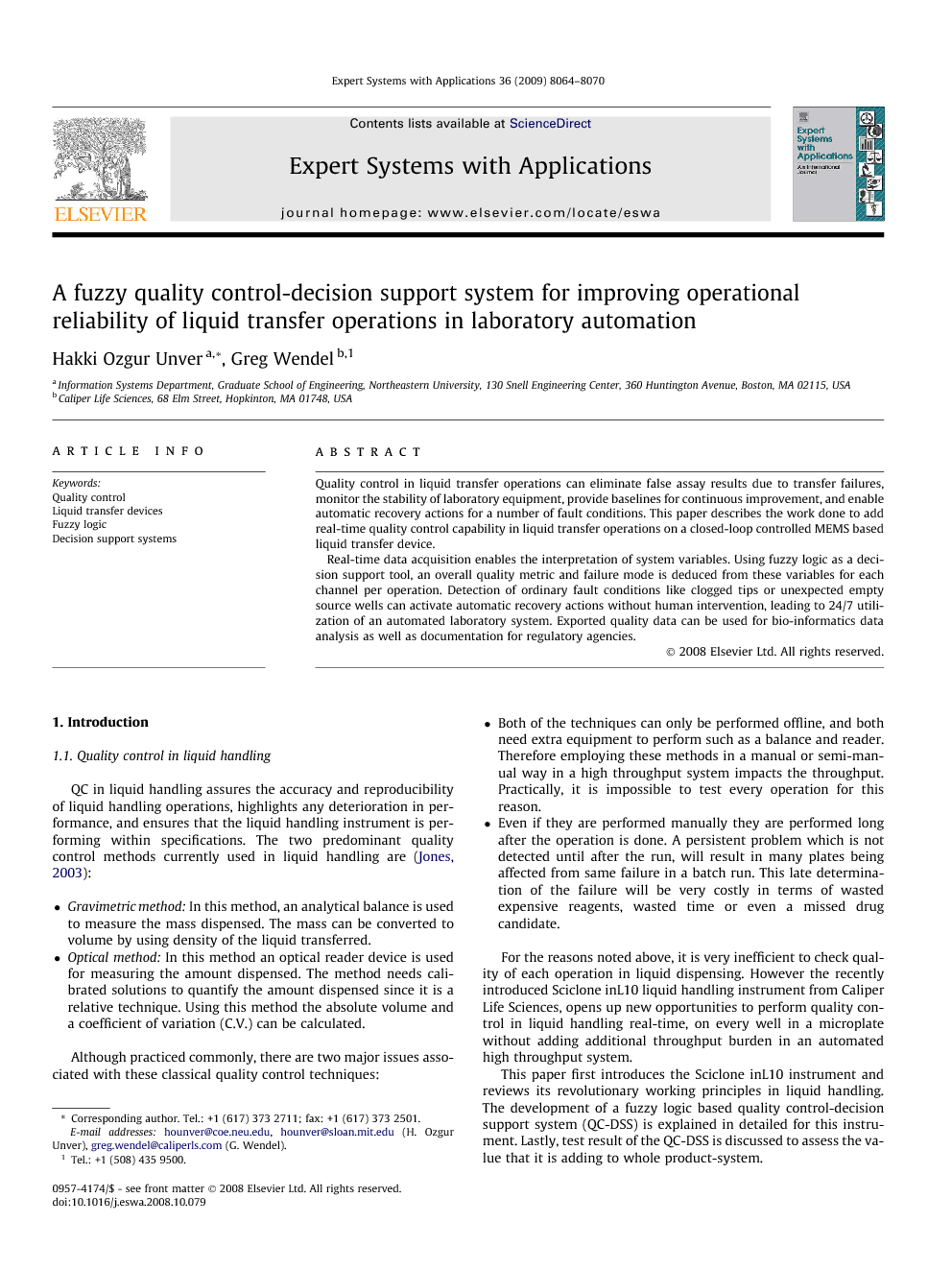 Quality control in liquid transfer operations can eliminate false assay results due to transfer failures, monitor the stability of laboratory equipment, provide baselines for continuous improvement, and enable automatic recovery actions for a number of fault conditions. This paper describes the work done to add real-time quality control capability in liquid transfer operations on a closed-loop controlled MEMS based liquid transfer device. Real-time data acquisition enables the interpretation of system variables. Using fuzzy logic as a decision support tool, an overall quality metric and failure mode is deduced from these variables for each channel per operation. Detection of ordinary fault conditions like clogged tips or unexpected empty source wells can activate automatic recovery actions without human intervention, leading to 24/7 utilization of an automated laboratory system. Exported quality data can be used for bio-informatics data analysis as well as documentation for regulatory agencies.

1.1. Quality control in liquid handling QC in liquid handling assures the accuracy and reproducibility of liquid handling operations, highlights any deterioration in performance, and ensures that the liquid handling instrument is performing within specifications. The two predominant quality control methods currently used in liquid handling are (Jones, 2003): Gravimetric method: In this method, an analytical balance is used to measure the mass dispensed. The mass can be converted to volume by using density of the liquid transferred. Optical method: In this method an optical reader device is used for measuring the amount dispensed. The method needs calibrated solutions to quantify the amount dispensed since it is a relative technique. Using this method the absolute volume and a coefficient of variation (C.V.) can be calculated. Although practiced commonly, there are two major issues associated with these classical quality control techniques: Both of the techniques can only be performed offline, and both need extra equipment to perform such as a balance and reader. Therefore employing these methods in a manual or semi-manual way in a high throughput system impacts the throughput. Practically, it is impossible to test every operation for this reason. Even if they are performed manually they are performed long after the operation is done. A persistent problem which is not detected until after the run, will result in many plates being affected from same failure in a batch run. This late determination of the failure will be very costly in terms of wasted expensive reagents, wasted time or even a missed drug candidate. For the reasons noted above, it is very inefficient to check quality of each operation in liquid dispensing. However the recently introduced Sciclone inL10 liquid handling instrument from Caliper Life Sciences, opens up new opportunities to perform quality control in liquid handling real-time, on every well in a microplate without adding additional throughput burden in an automated high throughput system. This paper first introduces the Sciclone inL10 instrument and reviews its revolutionary working principles in liquid handling. The development of a fuzzy logic based quality control-decision support system (QC-DSS) is explained in detailed for this instrument. Lastly, test result of the QC-DSS is discussed to assess the value that it is adding to whole product-system. 1.2. Sciclone inL10 The Sciclone inL10 is a nanoLiter scale liquid handling instrument, which can perform operations ranging from 10 nL to 10 μL. It is built on the versatile Sciclone ALH 3000 platform, where several different dispensing devices can be attached to the head of a gantry robot for serving a large range of liquid handling applications (Fig. 1). The novel technology used in the inL10 is a micro-electro mechanical system (MEMS) based flow meter. The 96 channel head is composed of twelve banks of eight channels.1.3. MEMS flow sensor – data source The core technology is a silicon based MEMS flow sensor, which provides feedback to an adaptive closed-loop control system. The MEMS flow sensor is composed of a silicon chip with a micro-channel and two pressure sensors (Fig. 2 and Fig. 3). A flow through the micro-channel results in a pressure drop between the sensors. Integrating the pressure difference between sensors in real-time provides feedback data to the control system for accomplishing high accuracy and precision (Van Der Schoot, Boillat, & De Rooij, 2001). Some of the operational data produced by the system in real-time, which are most useful for diagnostic purposes, are as follows (Boillat, Van Der Schoot, Arquint, & De Rooji, 1999): Residual volume (amount of volume accumulated after the channel is signaled to stop). Time (converted to flowrate). Temperature. Volume aspirated or dispensed. Pressure ratio (calculated by (Pin − Pout)/Pout).1.4. Sensor controlled dispensing Fig. 4 illustrates closed-loop control dispensing performed by inL10 instrument. Major system sub-assemblies can be summarized as follows: Head assembly consists of 12 boards each of which has 8 dispensing channels for a full head of 96 channels. Each channel is made up of a flow sensor, a solenoid valve and a microprocessor that controls the two. Each board has a master microprocessor that controls the activities of the 8 channel microprocessors for a total of 108 microprocessors in the head assembly. Pressure source which can supply positive and negative pressure to system liquid reservoir.Piping and liquid reservoir, which is filled by system fluid (usually water or 65% DMSO).A pressurized work fluid is passed from the reservoir through a micro-flow meter, valve, cannula, and orifice arrangement. By applying either positive or negative pressure to the working fluid reservoir a dispense or aspiration operation can be performed. The incorporated MEMS based flow meter which measures the flow during the aspiration/dispense step, the microprocessor which is devoted to the channel integrates the total volume, closing the valve when the specified volume target is reached. In use, the sample enters only the ceramic tip of the cannula and is held there before dispensing, it is never brought into the valve or sensor (Wendel, 2003).

Featuring an adaptive closed-loop control technique and producing real-time data per channel for each operation, the Sciclone inL10 redefined controllability and predictability of liquid transfer operations. From the high level of integration incorporated, emerges a high information content laboratory instrument that combines unparalleled power with an expert system to free the scientist from becoming an automation or liquid handling expert. Enabling nano scale liquid handling operations, the Sciclone inL10 has the potential of entering emerging markets in biotechnology research and also provides huge cost savings to laboratory budgets by minimizing the consumption of valuable samples and reagents which are used in scientific experiments. The fuzzy logic based quality control-decision support system developed and presented in this paper, adds tremendous value to the whole product-system, by increasing the confidence of the scientist in the machine performing real-time verification after each operation. The QC-DSS verifies the quality of each operation per channel real-time, detects an unsuccessful operation and also suggests possible reasons and recovery actions that should be taken to the user. By use of control blocks which are inherent to the Sciclone control software it is also possible to develop methods which can provide automatic recovery actions for common types of failures. By use of a database to store all the data acquired from the system, operational data is also presented in the form of visual graphs to make trend analysis that would be used in product improvement purposes by the manufacturer and audit purposes by regulatory agencies.