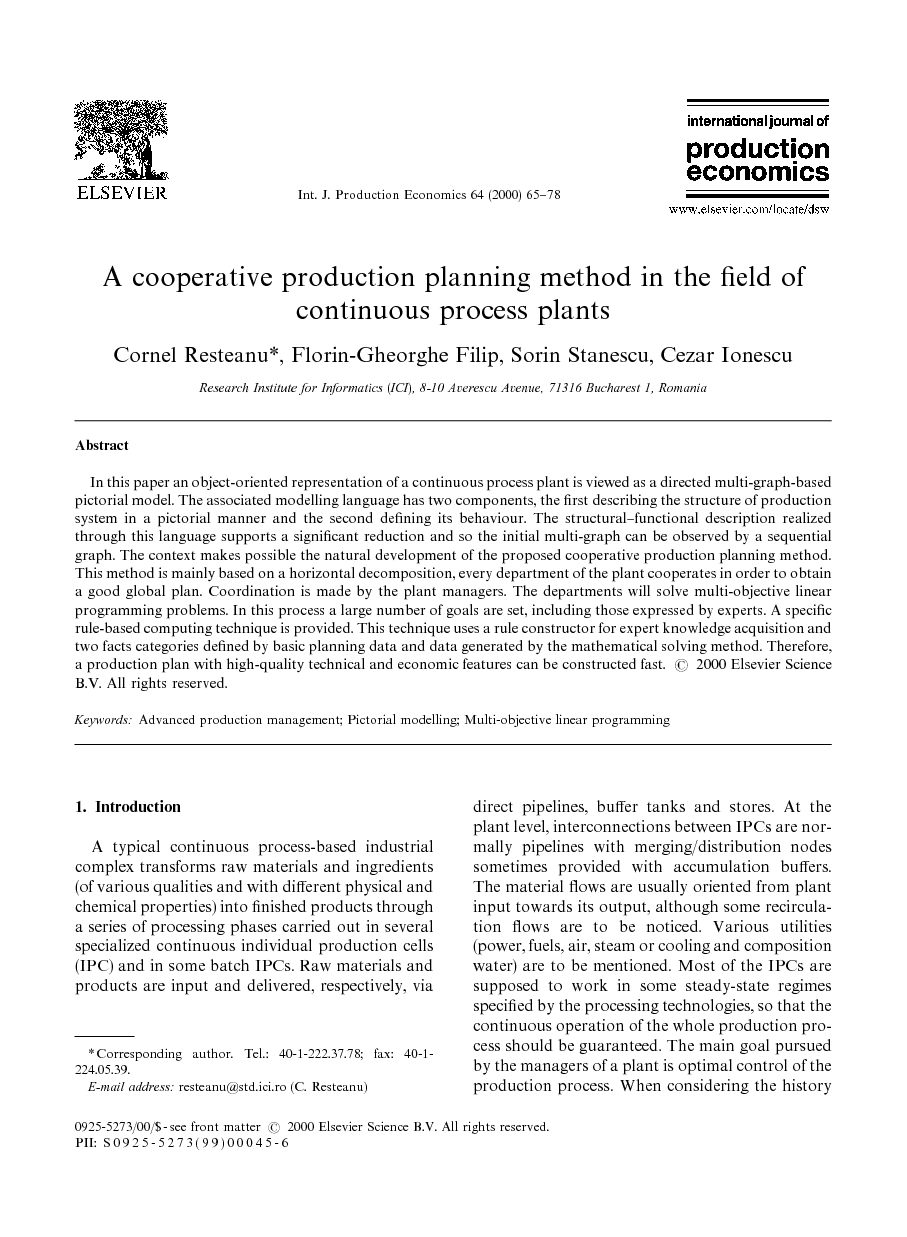 In this paper an object-oriented representation of a continuous process plant is viewed as a directed multi-graph-based pictorial model. The associated modelling language has two components, the first describing the structure of production system in a pictorial manner and the second defining its behaviour. The structural–functional description realized through this language supports a significant reduction and so the initial multi-graph can be observed by a sequential graph. The context makes possible the natural development of the proposed cooperative production planning method. This method is mainly based on a horizontal decomposition, every department of the plant cooperates in order to obtain a good global plan. Coordination is made by the plant managers. The departments will solve multi-objective linear programming problems. In this process a large number of goals are set, including those expressed by experts. A specific rule-based computing technique is provided. This technique uses a rule constructor for expert knowledge acquisition and two facts categories defined by basic planning data and data generated by the mathematical solving method. Therefore, a production plan with high-quality technical and economic features can be constructed fast.

A typical continuous process-based industrial complex transforms raw materials and ingredients (of various qualities and with different physical and chemical properties) into finished products through a series of processing phases carried out in several specialized continuous individual production cells (IPC) and in some batch IPCs. Raw materials and products are input and delivered, respectively, via direct pipelines, buffer tanks and stores. At the plant level, interconnections between IPCs are normally pipelines with merging/distribution nodes sometimes provided with accumulation buffers. The material flows are usually oriented from plant input towards its output, although some recirculation flows are to be noticed. Various utilities (power, fuels, air, steam or cooling and composition water) are to be mentioned. Most of the IPCs are supposed to work in some steady-state regimes specified by the processing technologies, so that the continuous operation of the whole production process should be guaranteed. The main goal pursued by the managers of a plant is optimal control of the production process. When considering the history of the field, we can distinguish among four stages in approaching this problem: (1) “Ad manum” acquisition of data (regarding the areas of technology, supply–delivery, finance, etc.), the development of a linear programming (LP) mathematical model, translating it into a format suitable for an LP-solver, solving and analysing the obtained solution. This work, which today would seem discouraging from the very beginning, was nevertheless accomplished because of the huge financial and material resources involved; (2) Development of the mathematical model by using a descriptive, non-procedural language, similar to the one in which mathematicians have described an LP model [1], [2] and [3]. Such a program receives data from the existing information system by means of locally designed interface, this software belonging to the class of matrix generators [4]; (3) Use of prototype products which are customized in order to identify with a particular production system [5]. This customized version of the prototype becomes part of the information system, being used for optimization. However, this integration is a loose one, because of the lack, at the design stage, of all the information system parts which have to be approached together with production optimization; (4) Embedding of production optimization into an advanced production management system (APMS). An APMS has to achieve: (1) Interactive description of the production system in a manner which technologists in the field are familiar with. Starting from this description of the plant structure and functions, the APMS has to allow the description of next versions of the plant; (2) Automatic output, using a plotter, of a production system drawing on any of its versions, allowing the drawing to be inscribed with relevant production data for longer time periods (a quarter, a year, a five-year plan); (3) Development of production plans and schedules with high-quality economic and technical features by using optimization and/or simulation techniques (multi-objective linear programming (MOLP) and simulation in sequential graphs, respectively), see [6]; (4) Choice of the best version for future development of the plant using information in the APMS's database which is processed by multi-attribute decision-making methods, see [7]; (5) Monitoring of the production in a panel-like manner; (6) Recording of statistical data and their processing for prediction purpose. These decisional elements have to be shown in a graphical way; (7) Interfacing with process-control level and with the rest of the information system, by being used in a local-area network. This paper addresses the last aspect described above, the APMS paradigm.

Due to the development of an important continuous process industry (for example, in Romania the petrochemical industry has a capacity of over 30 Mtones), efforts have steadily been made as to design information systems meant to contribute to its optimization. The presented method belongs to the algorithms and methods base developed for the I.C.I.s new line of software products in the large continuous process plants field. It develops production plans having high-quality economic and technical features. The solutions provided by the authors for the above-discussed problems have been theoretically validated and well received by end-users in the petrochemical milieu. It is the authors’ belief that modern object-oriented modelling combined with high-performance optimization gives the possibility of managing production material flow and logistics in an easier, quicker and, why not, better manner than by using conventional techniques. The costs for providing an AML are high enough but the benefits are even higher and the trend reveals a special interest in APMS with advanced interface. Software products commercialized on the international market, which are related to the petrochemical industry, for example, despite their cost estimated between US$ 20,000 and US$ 100,000, do not use a modelling language or an elaborate optimization procedure like those presented in this paper. We consider that, by implementing these results, we shall substantially contribute to the development of the APMS concept.