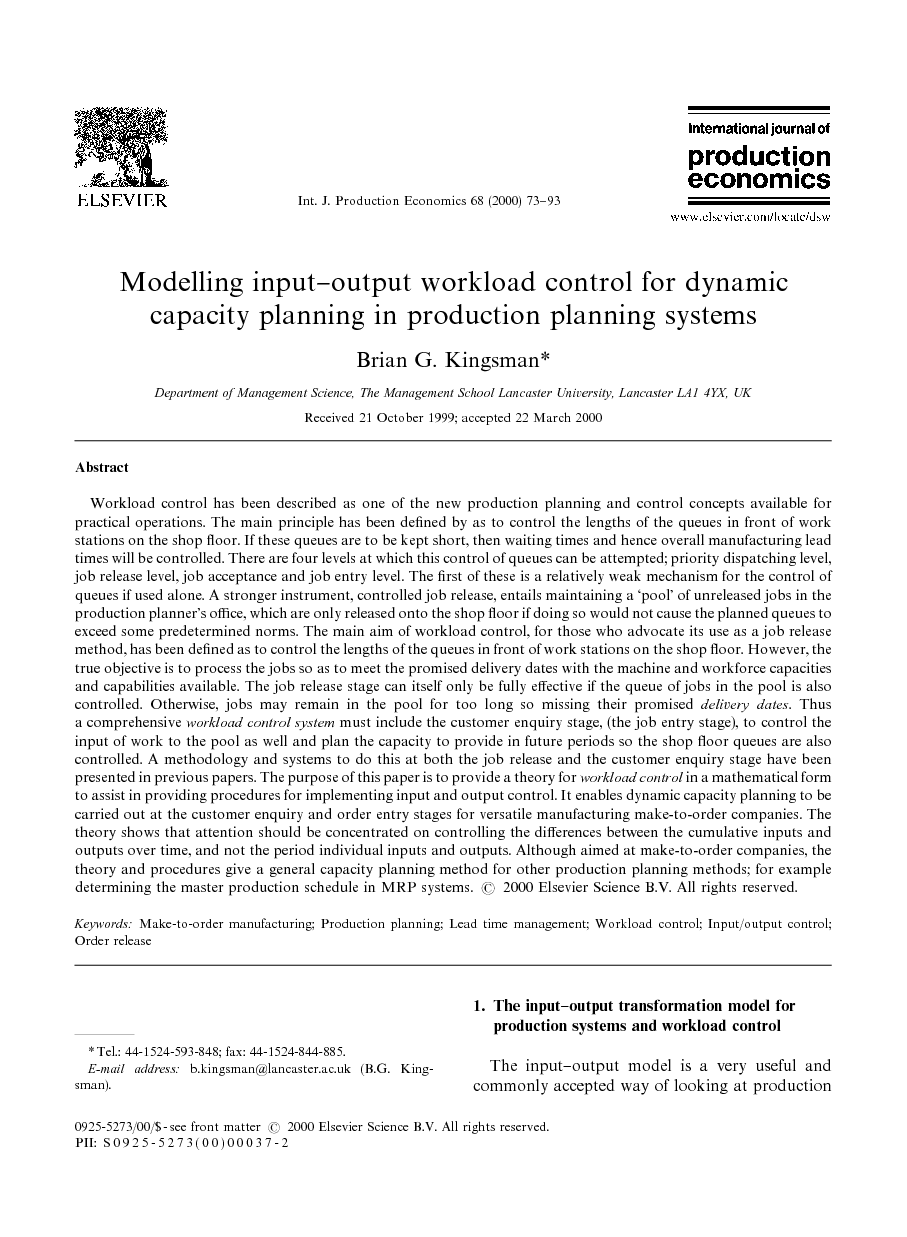 Workload control has been described as one of the new production planning and control concepts available for practical operations. The main principle has been defined by as to control the lengths of the queues in front of work stations on the shop floor. If these queues are to be kept short, then waiting times and hence overall manufacturing lead times will be controlled. There are four levels at which this control of queues can be attempted; priority dispatching level, job release level, job acceptance and job entry level. The first of these is a relatively weak mechanism for the control of queues if used alone. A stronger instrument, controlled job release, entails maintaining a `pool’ of unreleased jobs in the production planner's office, which are only released onto the shop floor if doing so would not cause the planned queues to exceed some predetermined norms. The main aim of workload control, for those who advocate its use as a job release method, has been defined as to control the lengths of the queues in front of work stations on the shop floor. However, the true objective is to process the jobs so as to meet the promised delivery dates with the machine and workforce capacities and capabilities available. The job release stage can itself only be fully effective if the queue of jobs in the pool is also controlled. Otherwise, jobs may remain in the pool for too long so missing their promised delivery dates. Thus a comprehensive workload control system must include the customer enquiry stage, (the job entry stage), to control the input of work to the pool as well and plan the capacity to provide in future periods so the shop floor queues are also controlled. A methodology and systems to do this at both the job release and the customer enquiry stage have been presented in previous papers. The purpose of this paper is to provide a theory for workload control in a mathematical form to assist in providing procedures for implementing input and output control. It enables dynamic capacity planning to be carried out at the customer enquiry and order entry stages for versatile manufacturing make-to-order companies. The theory shows that attention should be concentrated on controlling the differences between the cumulative inputs and outputs over time, and not the period individual inputs and outputs. Although aimed at make-to-order companies, the theory and procedures give a general capacity planning method for other production planning methods; for example determining the master production schedule in MRP systems.

Production planning and order acceptance are difficult management problems in produce-to-order companies because the arrival of orders into the company is a stochastic process. The arrival of enquiries cannot be predicted in advance. Whether an enquiry turns into an order depends upon the bid the company makes in response to a customer enquiry and how it compares with bids from competitors. Furthermore, each enquiry (order) tends to be different, requiring different amounts of processing work on the work centres and in a different routing sequence. Managing lead times using work load input/output control methods based on controlling a hierarchy of aggregate loads of work is a better approach than using forecast lead times. A theory for workload control that provides a mathematical model which can be used for dynamically planning capacity has been presented. The value for reducing the stochastic variability in delivery lead times, and/or obtaining more consistent use of the production capacity has been substantiated by simulation results for the situation of a sub-contracting MTO manufacturer.