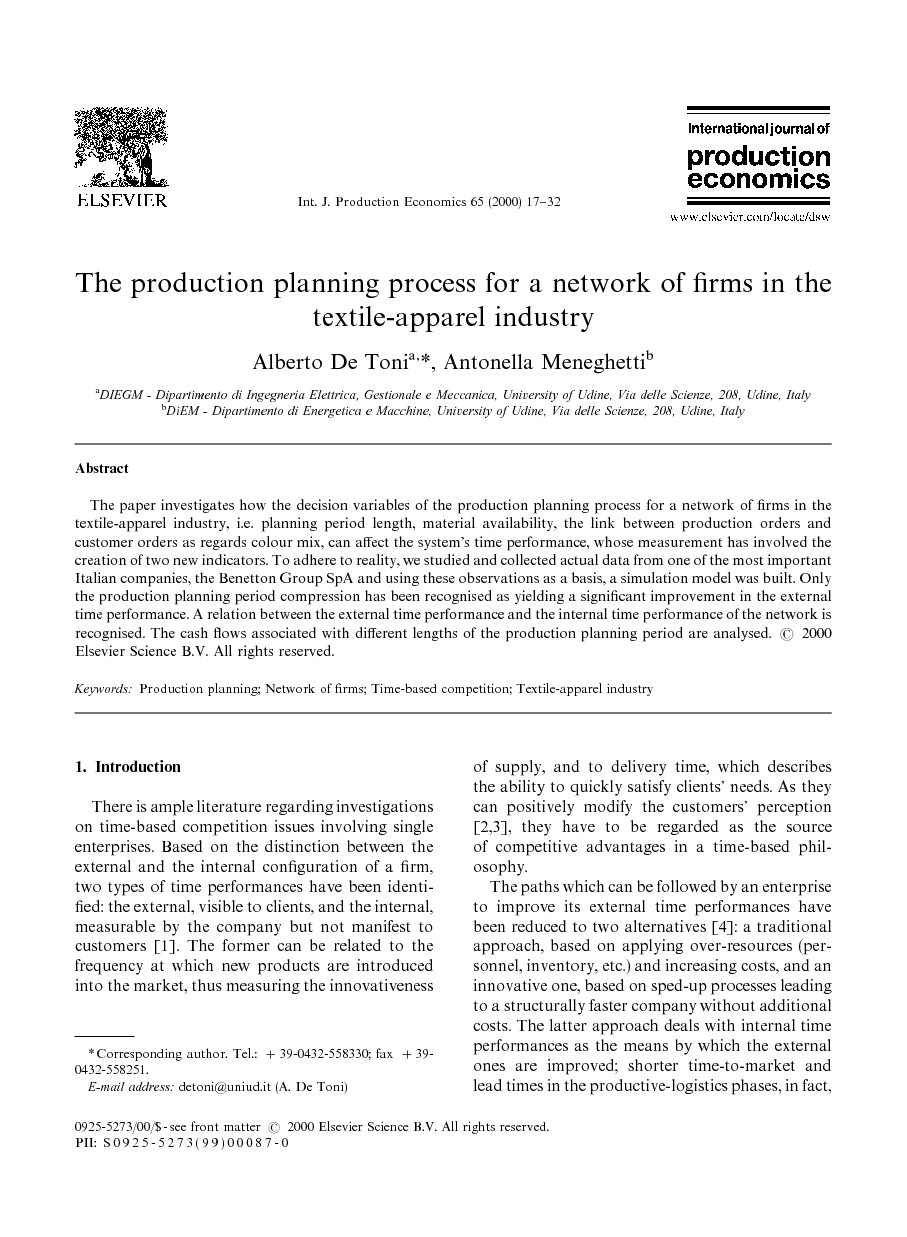 There is ample literature regarding investigations on time-based competition issues involving single enterprise. Based on the distinction between the external and the internal configuration of a firm, two types of time performances have been identified: the external, visible to clients, and the internal, measurable by the company but not manifest to customers [1]. The former can be related to the frequency at which new products are introduced into the market, thus measuring the innovativeness of supply, and to delivery time, which describes the ability to quickly satisfy clients’ needs. As they can positively modify the customers’ perception [2] and [3], they have to be regarded as the source of competitive advantages in a time-based philosophy. The paths which can be followed by an enterprise to improve its external time performances have been reduced to two alternatives [4]: a traditional approach, based on applying over-resources (personnel, inventory, etc.) and increasing costs, and an innovative one, based on sped-up processes leading to a structurally faster company without additional costs. The latter approach deals with internal time performances as the means by which the external ones are improved; shorter time-to-market and lead times in the productive-logistic phases, in fact, describe an agile enterprise which can profit from its quickness [5]. Practices that lead to reducing the time needed at the product development stage have been generally related to Concurrent Engineering, as analysed by many authors [6], [7], [8], [9] and [10]. In regard to the contraction of lead times along the operative chain, the literature has identified successful practices with the JIT core ones in the area of procurement [11] and [12], manufacturing [2], [3], [13], [14], [15], [16] and [17] and distribution [18] and [19]. Very little, instead, is known about the relation between practices and time performances for new forms of organisation such as networks of firms. These systems can be placed between the two extremes represented by fully independent firms, linked only by market laws, on one hand and hierarchical enterprises on the other. Network configurations allow small and medium sized firms to better face the new challenges from world-wide competition and the great Ford age companies to achieve the flexibility and responsiveness required by a turbulent market [20] and [21]. Therefore, as time-based concepts are extended to networks of firms, areas for improvement and successful actions must be identified. It has been suggested that a crucial aspect of networks is the coordination of its units, making, in fact, the system a “purposeful configuration” [22]. Therefore many authors have highlighted the role of the enterprise that manages the whole network, which has been called the hub firm [23], spider's web [24], strategic centre [25]. We have been wondering what behaviour this main firm should undertake to transform the network into a time-based competitor. If the focus is set on productive-logistics phases, coordination is performed by production planning. Consequently, it can be reasonably expected to represent the process by which time-based concepts are introduced into the system. Production planning, in fact, determines the rate at which materials enter the operative chain and manages their progress. Thus, it can affect the rapidity and the punctuality provided to clients and therefore the system's ability to attract more customers and strengthen their loyalty. Our attention has so been focused on the production planning process of networks as the main area for improvements. Since the Italian textile-apparel industry is renowned throughout the world and excellent cases are available for investigation, we decided to direct our analysis to it. On the one hand, in fact, its customers are strongly sensitive to external time performances. The fashion market could probably be considered one of the most turbulent and fickle, requiring a quick response to fashion changes whose rhythms are becoming more and more accelerated to satisfy customers’ propensity for anything modern and unusual. Therefore time-based competition has been for many years a coherent strategic orientation for this industry. On the other hand, a characteristic of the Italian industrial system is the great number of small and medium sized enterprises, that have fostered the spread of networks of firms and particularly in the textile-apparel industry the creation of successful systems like the Benetton Group. In the following sections, the network model we developed by analysing Benetton's production system is described and constraints to the production planning process clarified. The actions that are supposed to lead to time performance improvement are established and then verified by simulation. Finally, the results are explained and paths leading towards time-based competition identified.

Simulations show how even from a systemic as well as from a single firm point of view, achieving a favourable internal time performance is a means of gaining an external time performance, recognisable by customers. The production planning process was found to be an important area of improvement for a network in a time-based logic; shortening the production planning period, in fact, significantly affects the weighted average delivery anticipation. It leads, however, to increase set-up and transportation costs due to the greater number of jobs generated during a campaign. The path of the network towards time-based competition consequently appears traditional, where an improved customer service level, measured by DA, is accompanied by higher costs (see Fig. 17): the network is moved from point A to point B along its costs–service curve. Full-size image (4 K) Fig. 17. Traditional and innovative path of the network towards time-based competition. Figure options A new capability for managing the costs–performance trade-off could be reached by shifting the competition towards more advanced frontiers than its competitors’ curves. In this way the network would be moved from point A to point C through an innovative path, where the advantage of better delivery anticipation is gained without increasing costs. To obtain such a result, the planning period compression must be matched with system process reengineering: actions which are able to modify the technological means and managerial techniques of each firm in the network have to be undertaken so that the whole system becomes intrinsically faster as the time-based competition philosophy suggests. For example, if a reduction in set-up time were gained at each step in the chain, a greater number of jobs during a single campaign would not lead to higher costs. The behaviour described in Fig. 15 and Fig. 16 could be changed in favour of a more drastic contraction of the planning period length, so that the customer's sensitiveness to external time performance could be fully exploited. Thus, while the production planning process is shown to be an important area for improvement in a time-based logic, its results can be amplified by involving the other processes performed in the network