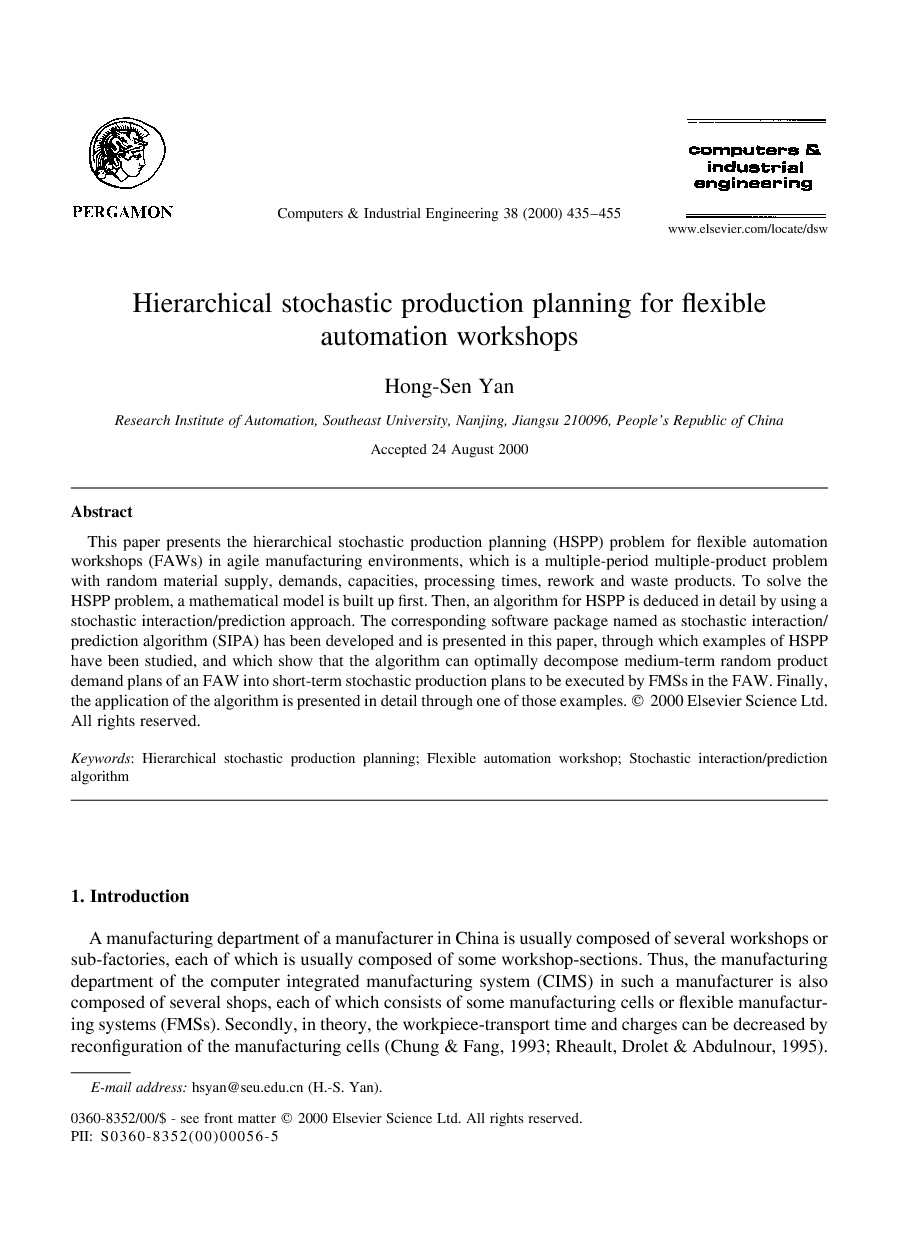 This paper presents the hierarchical stochastic production planning (HSPP) problem for flexible automation workshops (FAWs) in agile manufacturing environments, which is a multiple-period multiple-product problem with random material supply, demands, capacities, processing times, rework and waste products. To solve the HSPP problem, a mathematical model is built up first. Then, an algorithm for HSPP is deduced in detail by using a stochastic interaction/prediction approach. The corresponding software package named as stochastic interaction/prediction algorithm (SIPA) has been developed and is presented in this paper, through which examples of HSPP have been studied, and which show that the algorithm can optimally decompose medium-term random product demand plans of an FAW into short-term stochastic production plans to be executed by FMSs in the FAW. Finally, the application of the algorithm is presented in detail through one of those examples.

Because the existing papers on the PP problems with uncertainties mainly focus on uncertainties of the demand, capacity and material supply in the single-period or infinite-horizon setting and because most stochastic programming problems in the literature are solved for the single-period or infinite-horizon, we propose the new stochastic interaction/prediction approach to solve the HSPP problem for FAWs in agile manufacturing that is a multiple-period multiple-product problem with random material supply, demands, capacities, processing times, rework and waste products. In the paper, a mathematical model of stochastic production of an FAW is built up first. The stochastic interaction/prediction algorithm of HSPP for the FAW is then deduced. Based on the algorithm, the software package named SIPA has been developed and is presented in this paper. By means of SIPA, many examples of HSPP have been studied. Through one of those examples, the application of the algorithm and SIPA is introduced. As compared with the existing approaches to solve the PP and HPP problems with uncertainties, the present algorithm has the following features: 1.It solves the multiple-period multiple-product problem with more uncertainties and in a more complicated manufacturing setting (see Section 1). 2.It needs only expectations of r(k), di(k), vi(k), Ti(k) and TiT(k) Ri(k) Ti(k) and independence of Ti(k) from ui(k) and βi(k), but does not require their exact distributions. 3.On condition that expectation blanks and expectation demands for products in the FAW are given, the combinatorial optimization of the objectives, such as the work-in-process in FMSs, machine utilization, balance of loads on machines, and satisfaction of demands for products, is reached. 4.Since the FAW's optimal HSPP problem is decomposed into M FMSs’ optimal SPP sub-problems, the complexity of the problem is greatly reduced, thus speeding up the process of solving the problem. 5.The interactions View the MathML source among FMSs in the FAW can be obtained. Weight matrixes Qi(k) View the MathML source are symmetrical and (semi-) positive definite. Ri(k) and Ki(k) are symmetrical and positive definite. For simplicity, they can be taken as diagonal matrixes. Each element in them must not be too great in case the loss of significant digits in the matrix calculation makes the problem ill-conditioned. For the decomposition of the ten-day or week random product demand plans, the hour is taken as a unit of the element in Ti(k) and βi(k) in order to decrease its numeric and increase the accuracy of the matrix computation. To increase the satisfaction of the demands for products, the numeric of the element in Ki(k) can be properly increased. When some elements of View the MathML source are negative, the corresponding elements (that can be decimal) of αi(k) can be increased. SIPA has the friendly user interface. It is convenient for users to input and update both data and parameters of the algorithm. It can run by itself and also be taken as an algorithm module of algorithm base of the FAW controller if it is properly modified. It can be used not only to optimally decompose random product demand plans of FAWs but also to examine the rationality of both the expectation blank supply and the expectation product demand. If the expectation supply of blanks is not suitable to the given expectation demand for products, the expectation demand can not be satisfied, as may be imagined. Therefore, we will probe further into the problem of how to determine the expectation blank supply appropriate for the given expectation demand so as to meet it.