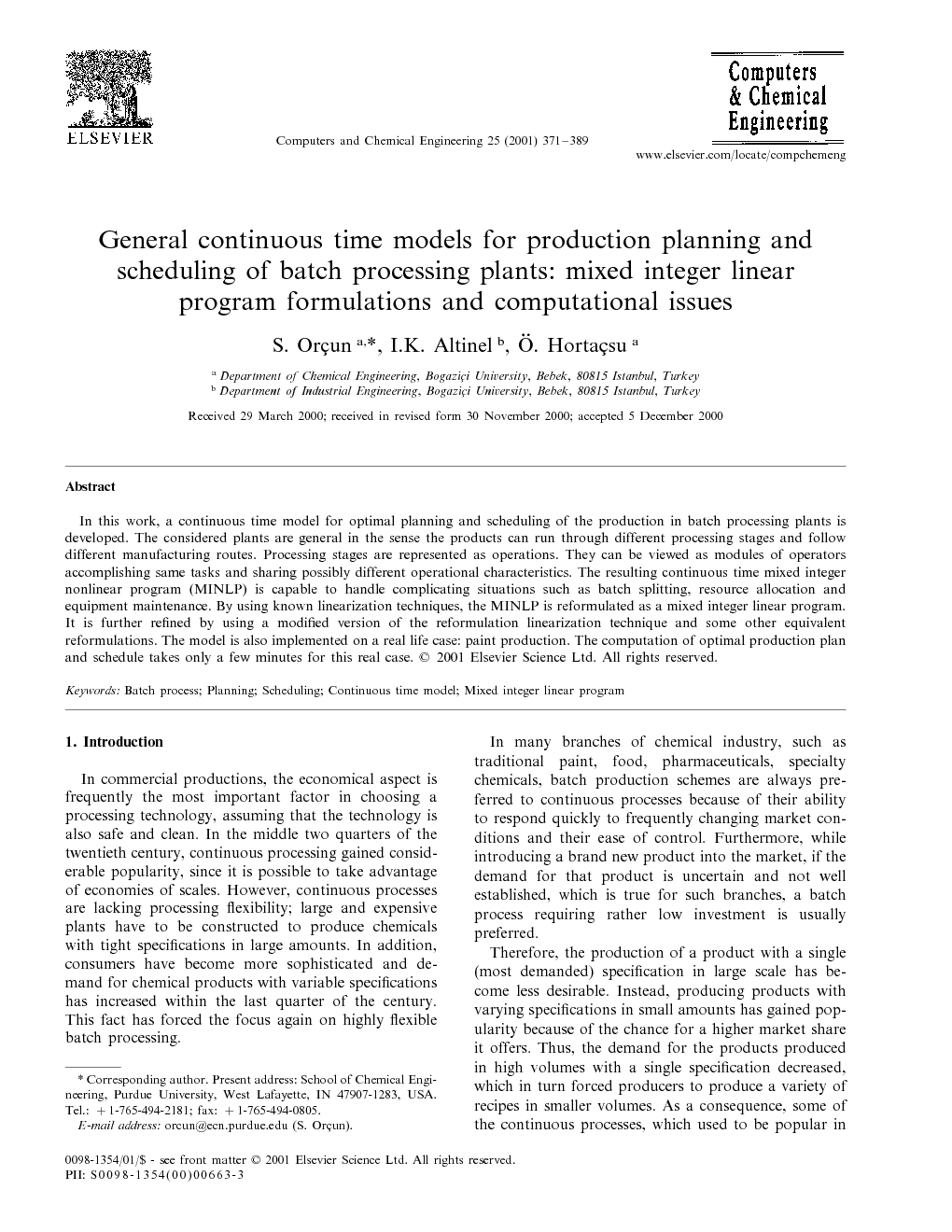 In this work, a continuous time model for optimal planning and scheduling of the production in batch processing plants is developed. The considered plants are general in the sense the products can run through different processing stages and follow different manufacturing routes. Processing stages are represented as operations. They can be viewed as modules of operators accomplishing same tasks and sharing possibly different operational characteristics. The resulting continuous time mixed integer nonlinear program (MINLP) is capable to handle complicating situations such as batch splitting, resource allocation and equipment maintenance. By using known linearization techniques, the MINLP is reformulated as a mixed integer linear program. It is further refined by using a modified version of the reformulation linearization technique and some other equivalent reformulations. The model is also implemented on a real life case: paint production. The computation of optimal production plan and schedule takes only a few minutes for this real case.

In this work, a general continuous time mathematical programming model is developed. The resulting linearized MINLP model can determine production plans and operation schedules for single-product, multi-product and multi-purpose batch processing plants with serial and identical or nonidentical parallel operators. It is also capable to handle complicating situations such as batch splitting, resource allocation and maintenance stops. The formulation is based on a continuous time representation and uses operational (modular) approach. Although it seems similar to state-task networks, this approach differs in its major concern. The operational approach focuses on the operations rather than the batches. Base MILP model is very difficult to solve. Computational difficulty in integer programming has an inherent relation with the bounds obtained through relaxations. In this case, the gap between the upper bound obtained by solving the LP relaxation of the base model is way above the optimal objective value. Such a huge gap means little pruning of the branch and bound tree. As a consequence, the base model is modified to obtain more efficient formulation by either using physical properties of the process, such as the disagregation of the constraints, or adopting general methodologies, such as RLT. As a result, a drastic reduction in the integrality gap and solution time has been obtained. The computational results reported in this work can be obtained by using the test library of Orçun (1999). This library consists of 25 hypothetical problems. To have a better idea on the practical efficiency of the model proposed in this work, a real case implementation of the most efficient modification of the base model, i.e. the one which gives the smallest average integrality gap with Orçun's test problems, is solved. The case is a production planning and scheduling problem obtained from one of the largest paint producers in Turkey. An optimal solution is obtained in less than 10 CPU min, which is very encouraging for the practical usability of the proposed continuous time planning and scheduling model.