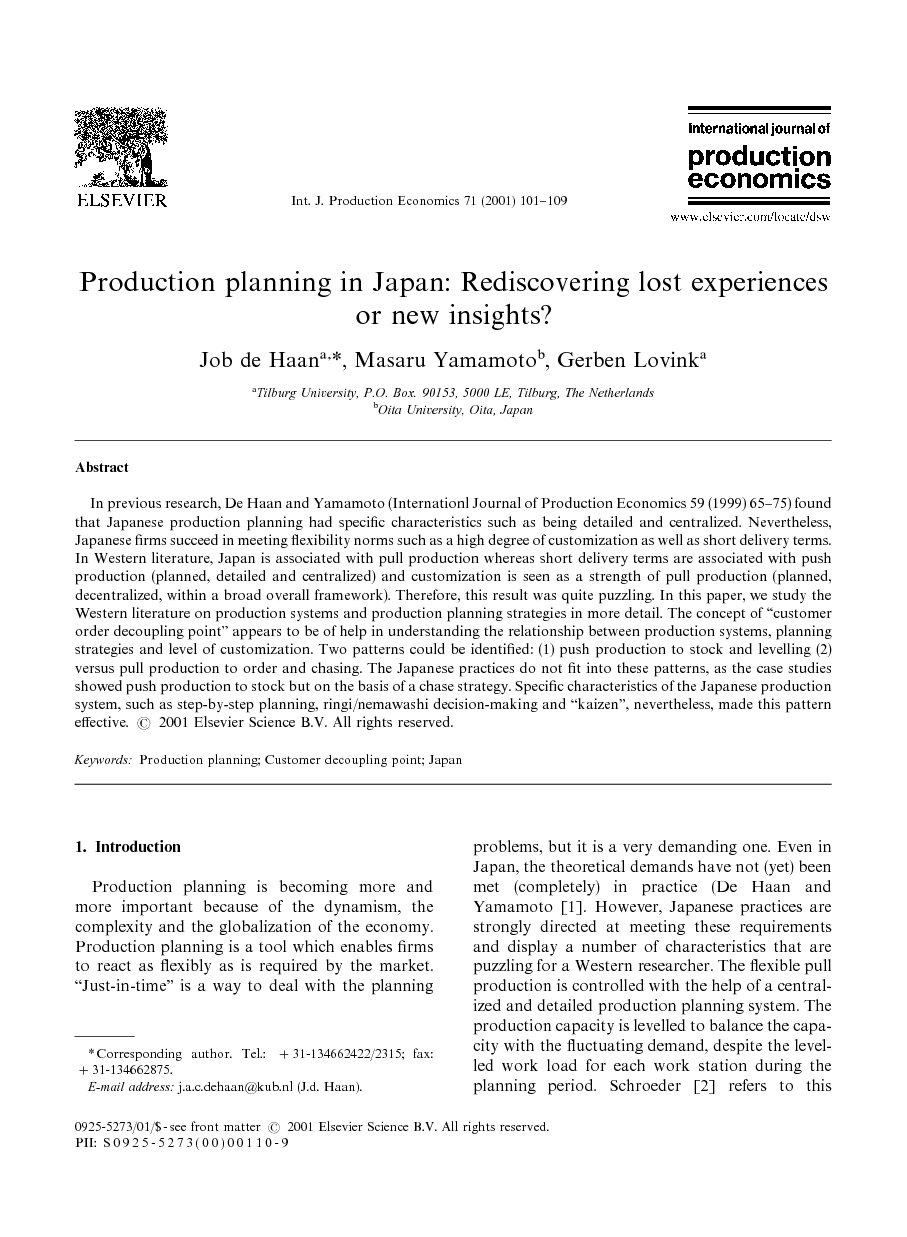 In previous research, De Haan and Yamamoto (in press) found that Japanese production planning had specific characteristics such as being detailed and centralized. Nevertheless, Japanese firms succeed in meeting flexibility norms such as a high degree of customization as well as short delivery terms. In Western literature, Japan is associated with pull production whereas short delivery terms are associated with push production (planned, detailed and centralized) and customization is seen as a strength of pull production (planned, decentralized, within a broad overall framework). Therefore, this result was quite puzzling. In this paper, we study the Western literature on production systems and production planning strategies in more detail. The concept of ‘‘customer order decoupling point’’ appears to be of help in understanding the relationship between production systems, planning strategies and level of customization. Two patterns could be identified: (1) push production to stock and levelling (2) versus pull production to order and chasing. The Japanese practices do not fit into these patterns, as the case studies showed push production to stock but on the basis of a chase strategy. Specific characteristics of the Japanese production system, such as step-by-step planning, ringi/nemawashi decision-making and “kaizen”, nevertheless, made this pattern effective.

Production planning is becoming more and more important because of the dynamism, the complexity and the globalization of the economy. Production planning is a tool which enables firms to react as flexibly as is required by the market. “Just-in-time” is a way to deal with the planning problems, but it is a very demanding one. Even in Japan, the theoretical demands have not (yet) been met (completely) in practice (De Haan and Yamamoto, in press). However, Japanese practices are strongly directed at meeting these requirements and display a number of characteristics that are puzzling for a Western researcher. The flexible pull production is controlled with the help of a centralized and detailed production planning system. The production capacity is levelled to balance the capacity with the fluctuating demand, despite the levelled work load for each work station during the planning period. Shroeder [1] refers to this strategy as one of the alternatives that can be chosen, while Heizer and Render [2] refer to this strategy as being typical of Japan, together with the Kanban system. Adam and Ebert [3] also indicate that pull production is characteristic of the Japanese production system. Bonney et al. (in press) are much more in line with Schroeder as they question the difference between push and pull production. They conclude that, if lean production methods are used, push should do at least as well as pull. This brings us to the central research question of this paper: Are the Japanese production planning practices in line with what the (western) literature advises? This question is divided into three sub-questions: •does Western literature reveal a consistent pattern of production planning? •is there such thing as a “Japanese” production planning system? •to what extent are these patterns in line? The remainder of the paper is structured as follows: Section 2 is devoted to theoretical observations on production systems and production planning; Section 3 is devoted to the Japanese production planning practices in four firms, based on case study research. For this exploratary research we choose firms that were as diverse as possible with respect to technology (process, mass and small batch production), market (industrial, and consumer-markets with different buying patterns) and, size. Because of this richness we consider these firms as adequately representative for our purpose: discover (dis)similarities between Western literature and Japanese practices. From documents, interviews and factory visits we get a picture of the patterns in these firms. Section 4 confronts the findings from the two previous sections to answer the research questions and to find implications for management practices as well as for theory: new and improved questions can be asked.

The central research question in this article was whether Japanese production planning practices are in line with the (western) literature in this field. For that reason, we analyzed a number of recent text books to find out whether a consistent pattern is revealed. It turned out that no such single pattern exists but we did discover two separate patterns in the literature. One model was “chase, pull, order” and the other was “level, push, stock”. The level of customization involved in each interferes with the push versus pull distinction. The customer order decoupling point (CODP) appeared to be crucial in the production planning process this point in the production process is the customer order leading to production for an anonymous market. As long as the customer order is visible (i.e. before CODP) the pattern is: Pull production, to order, planned with the help of a chase strategy. After the CODP (i.e. when production is for an anonymous market) the pattern is: Push production, to stock, planned with the help of a levelling strategy. Next, we examined four case studies in Japanese factories to summarize Japanese practices in production planning. Four case studies were carried out in firms differing in the traditional contingency factors: technology, environment, and size. Three out of four companies appeared to produce-to-stock beer, shoes, and computer chips. Their production control activities, both with respect to order release and shop floor control are of a push character as could be expected because of the production-to-stock as well the model found in literature. However, for two out of three cases, the inventory of finished products was rather limited, only a couple of days. In this respect, they looked like the only assembly-to-order firm (cars). The same goes for the stocks of work-in-process. These limited stocks are in line with the JIT-practices that are known to be used in Japan at least as an objective to minimize waste (De Haan and Yamamoto, in press). For all four factories, the basic production planning strategy appeared to be the chase strategy, using the work force to balance production and sales through shift work, over- time and temporary workers. So the “Japanese system” is a chase strategy whether or not the system is “pull, to order”. In addition to that “push, to stock” is organized as much as possible following the “pull, to order” principles. We see a clear distinction between what could be expected on the basis of the (Western) literature and Japanese practices. The chase planning strategy does not fit with the other aspects of the model as presented in Section 2. From a conceptual view, the model was consistent. Nevertheless, the Japanese firms in the case studies would appear to perform well. This means that they manage to overcome possible roadblocks in some way or another. Firstly, there is the availability of required information, as we see from Table 1. At up to six levels of planning, the plans are refined with the help of more accurate facts and figures about the planning period. Secondly, the planning procedure enables the firm to communicate explicitly about future plans without too much coercion. At the levels involved in the various stages the plans are discussed and negotiated before they are actually formulated. This improves the acceptability of the plans as well as their applicability for those concerned. The nemawashi/ringi system resolves part of the puzzling characteristics associated with Japanese planning practices mentioned in the introduction. Finally, the ever-improving level of process control should be mentioned. Because of the small group Kaizen activities, the processes within firms are improved on a step-by-step basis. This is reflected in the work methods as well as in the discipline with which these are applied in everyday practice. Both the planning procedure and the performance discipline facilitate the chase strategy even in the “push, to stock” production system. In conclusion, Japanese planning practices provide new insights. They do not make Westerners rediscover lost practices. Smart organization of resources makes push production to stock look more and more like pull production to order. The planning procedure and performance discipline are crucial in this respect.