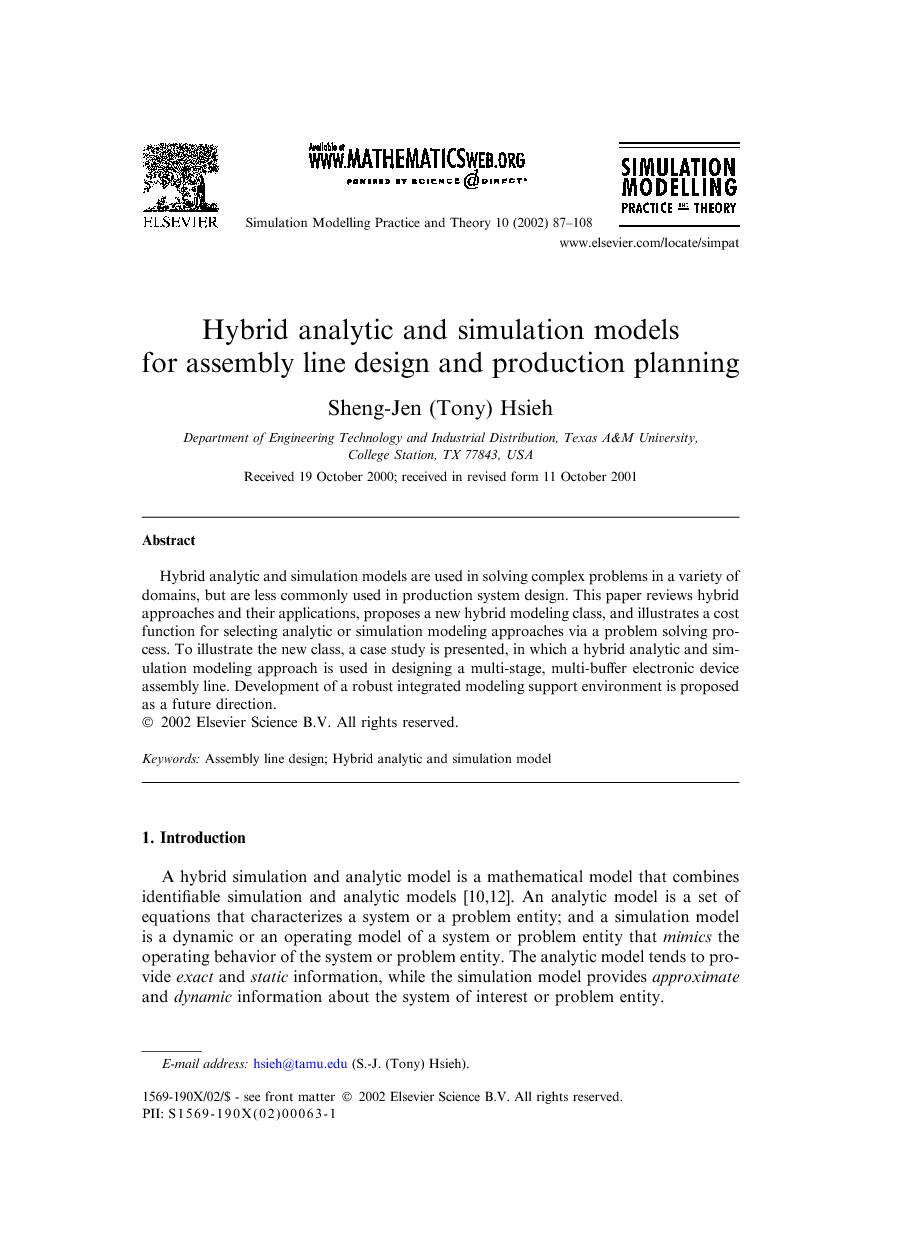 Hybrid analytic and simulation models are used in solving complex problems in a variety of domains, but are less commonly used in production system design. This paper reviews hybrid approaches and their applications, proposes a new hybrid modeling class, and illustrates a cost function for selecting analytic or simulation modeling approaches via a problem solving process. To illustrate the new class, a case study is presented, in which a hybrid analytic and simulation modeling approach is used in designing a multi-stage, multi-buffer electronic device assembly line. Development of a robust integrated modeling support environment is proposed as a future direction.

A hybrid simulation and analytic model is a mathematical model that combines identifiable simulation and analytic models [10] and [12]. An analytic model is a set of equations that characterizes a system or a problem entity; and a simulation model is a dynamic or an operating model of a system or problem entity that mimics the operating behavior of the system or problem entity. The analytic model tends to provide exact and static information, while the simulation model provides approximate and dynamic information about the system of interest or problem entity. A simulation modeling approach often requires more effort to obtain solutions than an analytic one if analytic procedures are available. However, it is more costly to model real system behavior over time using analytic models than simulation models. As computer technology and simulation software has advanced, the cost of computer time has become much cheaper, and simulation software has become more widely available. Use of simulation models to model complex systems has become more feasible and popular. The choice between simulation or analytic models now depends primarily on the nature of the application, required accuracy, and availability of solution procedures. Making more use of one or the other during the various stages of problem solving can result in tremendous cost savings. Banks et al. [5] note the advantages and disadvantages of using analytic and/or simulation models as follows: •Simulation models are often easier to apply than analytic models. •Analytic models often require many simplifying assumptions. •Analytic models provide a limited number of system performance measures. •Simulation models can be costly to construct and validate. •An analytic model may serve as a simple, initial model. •A simulation model can give early insight and estimates of behavior for more complex systems. Combining analytic and simulation modeling approaches can result in cost savings in solving complex problems [26]. Over the years, hybrid simulation and analytic models have been applied to product and structure design [16] and [19], process design [9], power plant performance prediction [21], and the semiconductor industry [22]. The number of hybrid simulation/analytic model application domains has also expanded rapidly with the development of the information technology industry; typical applications include computer network performance [25], processor interconnection design [11], and distributed memory architecture performance evaluation [24]. In the area of computer performance modeling, significant effort has also been devoted to developing integrated modeling support tools (IMST) for performance engineering. Performance engineering describes the entire process of using performance techniques within software and hardware design and implementation [13] and [28]. It includes modeling, measurement and use of results. Beilner and Stewing [6] presented the needs, overall concepts and techniques for a prototype of an integrated tool called HIT. An example is included to illustrate tool functions. Pooley [23] describes the need, architecture, support environment, and modeling aspects for an IMST system that is a later version of HIT. This IMST architecture consists of several layers—such as modeling study, Experimenter, model construction, model analysis, and reporting—each with different tools to facilitate the tasks for that layer. The tools in the model construction layer facilitate analytic and simulation model development. The user may choose appropriate tools for different stages of problem solving. To enhance the use of performance models and make such models more accessible to non-expert users, the IMST Experimenter layer enables users to automatically create and run experiments within a performance-modeling context. The Experimenter offers two key features: (1) an interface that allows users unfamiliar with the development of the underlying performance model to easily access and experiment with the model; and (2) a framework for integrating modeling tasks with other performance analysis tasks [14]. Few hybrid simulation/analytic models have been found in production planning and production system design applications such as assembly line design. Pierce [22] presents “golden nuggets” or principles for modeling and designing automated material-handling systems (AMHS) for semiconductor wafer fabrication. Discrete-event simulation, analytic and spreadsheet models were developed to model the performance, reliability, and cost/benefits of conventional clean room material handling including manual and automated systems. Kozan [16] discusses the major factors influencing the transfer efficiency of seaport container terminals. An analytic model utilizing queuing techniques was constructed to draw inferences regarding strategies for a container terminal’s service improvement. Later the problem was formulated as a simulation model and a comparative analysis was performed on these models. Byrne and Bakir [7] describe the use of a hybrid simulation and analytic approach for production planning. Their emphasis is on the use of an analytic model to generate an optimum production plan, then using this plan as an input to a simulation model. Then the simulation of the manufacturing system is subjected to realistic operational policies. If the simulation results are different from the analytic model, they are then used to adjust the constraints of the analytic models.

In this paper, we have described the trade-off between using the analytic and simulation models, reviewed a classification system for hybrid analytic-simulation models, proposed an additional class, and presented a cost function for decision making in selecting analytic or simulation models for problem solving. Applications from the literature were used to illustrate the class descriptions. In addition, a case study of real-life project—the design of a multi-stage, multiple buffer electronic device assembly line—was used to demonstrate how the proposed new class of hybrid analytic and simulation modeling might be applied. Future research in this area could include: •The development of a decision aid with a library of hybrid analytic and simulation model case studies. This tool would be beneficial for both decision-makers and analysts. The presentation of the information could be adaptive based on user knowledge differences. •Development of a robust Experimenter, such as that described in [23], which contains a design of experiments element. Such a tool would allow users to derive appropriate experiment plans for different problems. •Incorporate the hybrid simulation and analytic model classes into a modeling support system such as that described in [23] and [6], respectively. This would allow the system to adjust to differences in user knowledge, background and rankings, and to provide appropriate support to experiment planning for complex problem solving.