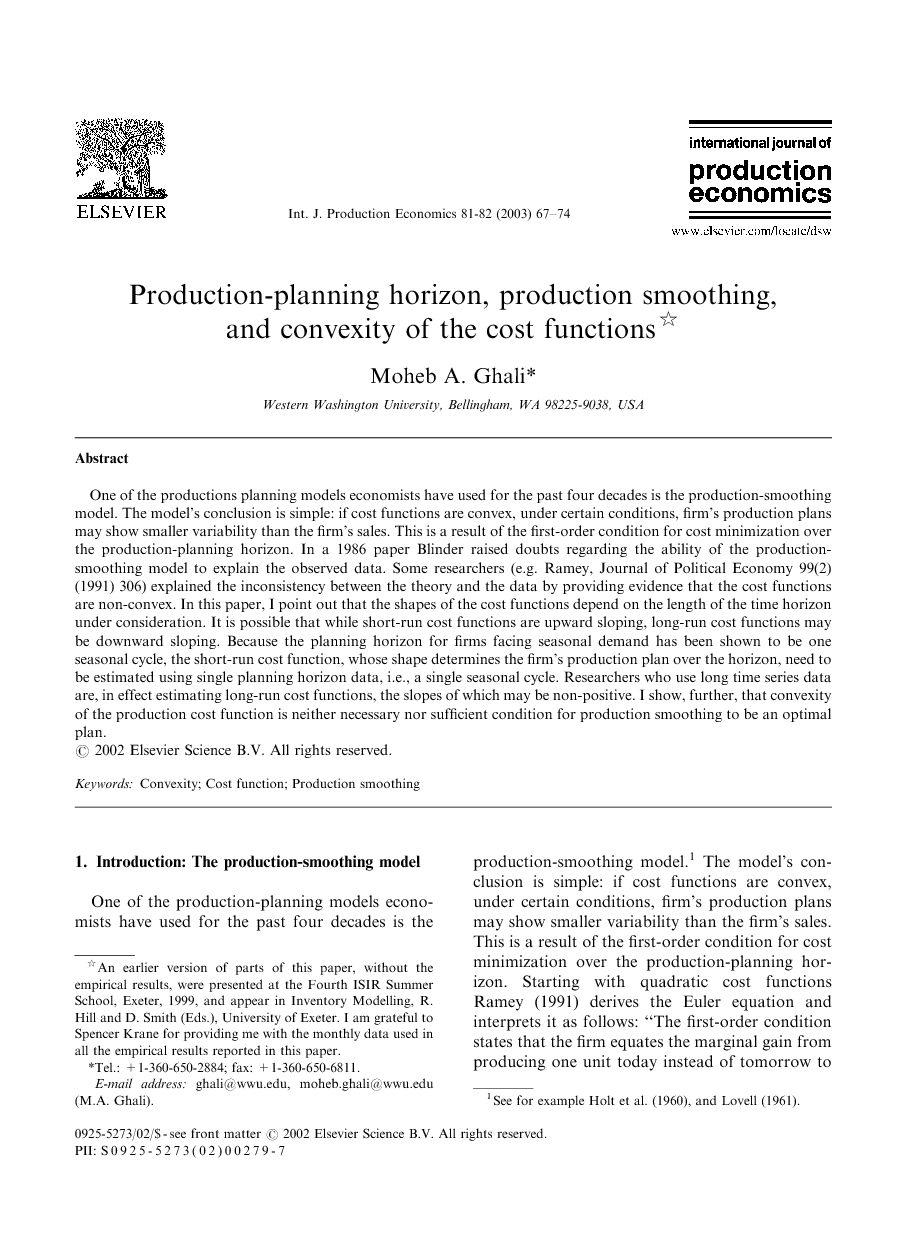 One of the production-planning models economists have used for the past four decades is the production-smoothing model.1 The model's conclusion is simple: if cost functions are convex, under certain conditions, firm's production plans may show smaller variability than the firm's sales. This is a result of the first-order condition for cost minimization over the production-planning horizon. Starting with quadratic cost functions Ramey (1991) derives the Euler equation and interprets it as follows: “The first-order condition states that the firm equates the marginal gain from producing one unit today instead of tomorrow to the cost of holding the unit in inventory. The difference in costs between the two periods depends on production because marginal costs vary with the level of production” (Ramey, 1991, pp. 312–313). The production-smoothing model, in various formulations, has been empirically implemented and has received some support. In a study of monthly physical quantity data on six industries and monthly cross section data on one industry, Ghali (1974) reported strong support for the model. Fair (1989) using monthly physical quantity data on seven industries, reported results that are “quite supportive of the production-smoothing hypothesis” (1989, p. 368). Krane and Braun reported evidence of production smoothing in 25 out of the 38 four-digit industries they studied (1991, p. 569).2 Of the 13 cases in which the variance of production exceeded the variance of shipment nine were accounted for by “agricultural or lumber products and the materials inventory cases” (1991, p. 569). When Krane and Braun decomposed the variances of production and shipment into seasonal and residual components, they found production to be smoother than sales in 30 of the 38 series. As in Ghali (1974) and Fair (1989), Krane and Braun (1991) used monthly physical quantity data which had not been subjected to seasonal adjustment and which pertained to four-digit or higher SIC industries. However, the empirical support is not universal. In a 1986 paper Blinder raised doubts regarding the ability of the production-smoothing model to explain the observed data (Blinder, 1986). He examined data on ten durable goods and ten non-durable goods, two-digit manufacturing industries. He found that “…the production-smoothing model is in trouble. Certain overwhelming facts seem not only to defy explanation within the production-smoothing framework, but also actually to argue that the basic idea of production smoothing is all wrong. First, firms do not in fact smooth production; production is actually more variable than sales” (1986, p. 432). West (1986), Krane and Braun (1991), and Demelis and Ghali (1994) used a Generalized Variance Bounds test, rather than the simple variance ratio used by Blinder. These tests require the estimation of the parameters of the Euler equation derived from the minimization of quadratic cost functions. Krane and Braun (1991) while reporting the “detrended production is smoother than detrended shipments in 25 out of 38 industry or product groupings” also found that signs of the estimated parameters of the cost functions are “not consistent with those assumed by the production-smoothing versions of these models. Consequently, formal variance bounds tests do not yield much insight in tests of optimization models” (1991, p. 577). Ramey (1991) explained the inconsistency between the stylized and the observed facts by arguing that cost functions are non-convex. She used data for industries aggregated to the two-digit SIC level, and more disaggregated data on the automobile industry and the pneumatic casings industry to estimate the Euler equation. Reviewing her empirical results, Ramey concludes “The empirical results… cast serious doubt on the notion that firms use inventories to smooth production. The estimates from the stochastic Euler equation indicate that firms behave as if they faced declining, not rising marginal costs. Instead of smoothing production, firms seem to bunch production” (1991, p. 329). It is important to note that the shape of the production cost function, whether convex or non-convex, is an important determinant, but not the only determinant, of whether production smoothing is an optimal behavior.