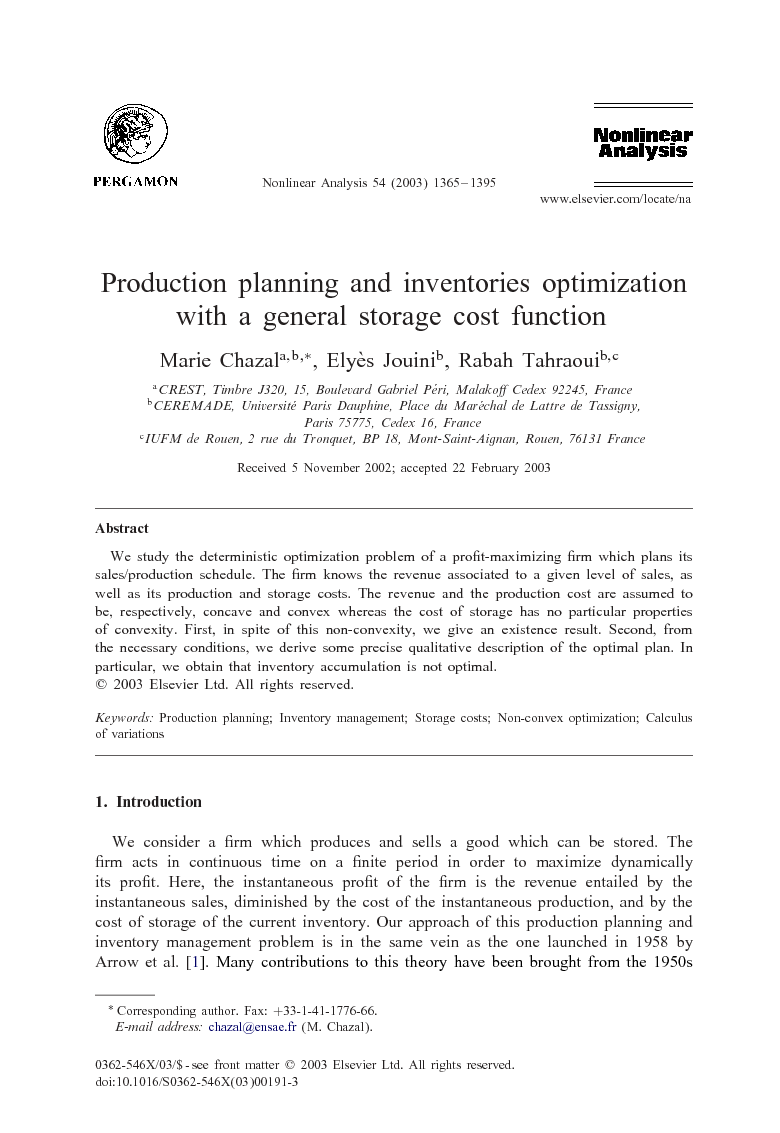 We study the deterministic optimization problem of a profit-maximizing firm which plans its sales/production schedule. The firm knows the revenue associated to a given level of sales, as well as its production and storage costs. The revenue and the production cost are assumed to be, respectively, concave and convex whereas the cost of storage has no particular properties of convexity. First, in spite of this non-convexity, we give an existence result. Second, from the necessary conditions, we derive some precise qualitative description of the optimal plan. In particular, we obtain that inventory accumulation is not optimal.

We consider a firm which produces and sells a good which can be stored. The firm acts in continuous time on a finite period in order to maximize dynamically its profit. Here, the instantaneous profit of the firm is the revenue entailed by the instantaneous sales, diminished by the cost of the instantaneous production, and by the cost of storage of the current inventory. Our approach of this production planning and inventory management problem is in the same vein as the one launched in 1958 by Arrow et al. [1]. Many contributions to this theory have been brought from the 1950s until now, with many different approaches. However, authors generally consider firms that do not have any control on the level of the (possibly stochastic) demand driven sales. In this paper, we work in a competitive and deterministic context. Following, Arvan and Moses [2], we assume that the firm controls not only its production but also its sales level. It knows the revenue associated to the selling of x units of goods, the cost of producing y units, and the cost of storing S units of the good. We assume that the marginal revenue is non-increasing and that the marginal cost of production is non-decreasing, i.e. the revenue function is concave and the production cost function is convex. Our aim is to study the impact of the shape of the storage cost in this context: does the firm actually use its storage ability to accumulate inventories? The concavity assumption on the revenue function is quite realistic. A particular case of our model is the following: sales are completely within the company's control but the price is a given function of the level of sales. This price is governed by the demand curve. When the firm is monopolistically competitive, it is a non-increasing function of the quantity of the product that the firm wants to put on the market. By computing the instantaneous revenue as the sales rate times the corresponding price, the concavity of the revenue corresponds to the non-decreasing feature of the demand price. The convexity of the production cost means that producing additional output increases expenditures, without any scale economies. The sales/production planning problem of the profit-maximizing firm is formulated as a maximization problem on a set of integrable decision variables: the sales and production rates paths. The cumulative sales and production processes are therefore continuous. The existence issue of an optimal sales/production plan is addressed by considering a relaxed optimization problem where the cumulative sales processes is allowed to jump at time 0: the sales path may have a singular part at time 0. We prove that the relaxed problem has at least one solution and that, if it has a solution with no singular part, this solution provides an optimal sales/production plan. We also derive from the first-order conditions of optimality some precise qualitative description of the optimal plan. We prove that, whatever the shape of the storage cost is, it is never optimal for the firm to accumulate inventory. In particular, if the company starts with no good in stock, it adopts the static strategy which consists in producing and selling at the same constant rate. This optimal rate is the quantity, a, at which the marginal revenue is equal to the marginal production cost. If the firm is endowed with an initial inventory then, the best sales/production policy consists in selling this initial inventory in an optimal way: the level of sales (resp. production) is always greater (resp. lower) than a, it is non-increasing (resp. non-decreasing) until the exhaustion of the inventory. Production actually starts when the marginal revenue entailed by the sales, View the MathML source, overtakes the lowest marginal cost of production, View the MathML source. Then, sales and production rates (x(t),y(t)) are chosen so as to equal the marginal revenue and the marginal cost of production, i.e View the MathML source. Once the firm has cleared all its stock it maximizes its profit over time by maximizing its instantaneous profit, producing and selling at the constant rate a. This leads to a three phases sales/production plan. The precise formulation of the planning problem of the firm is given in Section 2. The existence result is stated in Section 3. Section 4 is devoted to the characterization of the extremals of both relaxed and initial problems, from which we deduce some qualitative description of the optimal plan. The proofs are collected in 5 and 6.

In this paper, we have shown that, if the revenue is concave and if the production cost is convex then, the behavior of the company towards inventories is qualitatively the same for any kind of storage cost function: the firm does not use its storage ability for inventory accumulation. One possible explanation of this phenomenon is the following. Since the firm must have cleared all its stock at the end of the period, an inventory accumulation would lead it to let variate its sales rate from below a to above a and vice versa for the production rate.1 But, the concavity of the revenue and the convexity of the production cost urges the company to reduce the variations of the sales and production rates. Our model is more suited for determining the optimal way to sell an inventory than for explaining inventory accumulation. In order to carry out this last task, it would be of interest to introduce non-convexities in the production cost function. There are some empirical results showing evidence of firms facing decreasing marginal cost on some range of output (see [8]). The variation of the production rate should be greater under these conditions than under increasing marginal cost. Finally, our model suffers from time independence. Time plays an obvious role in production planning mixed with inventory management: inventories constitute an alternative to future production. Hence, time-dependent production cost and/or time-dependent revenue should be considered. These are directions for future research.