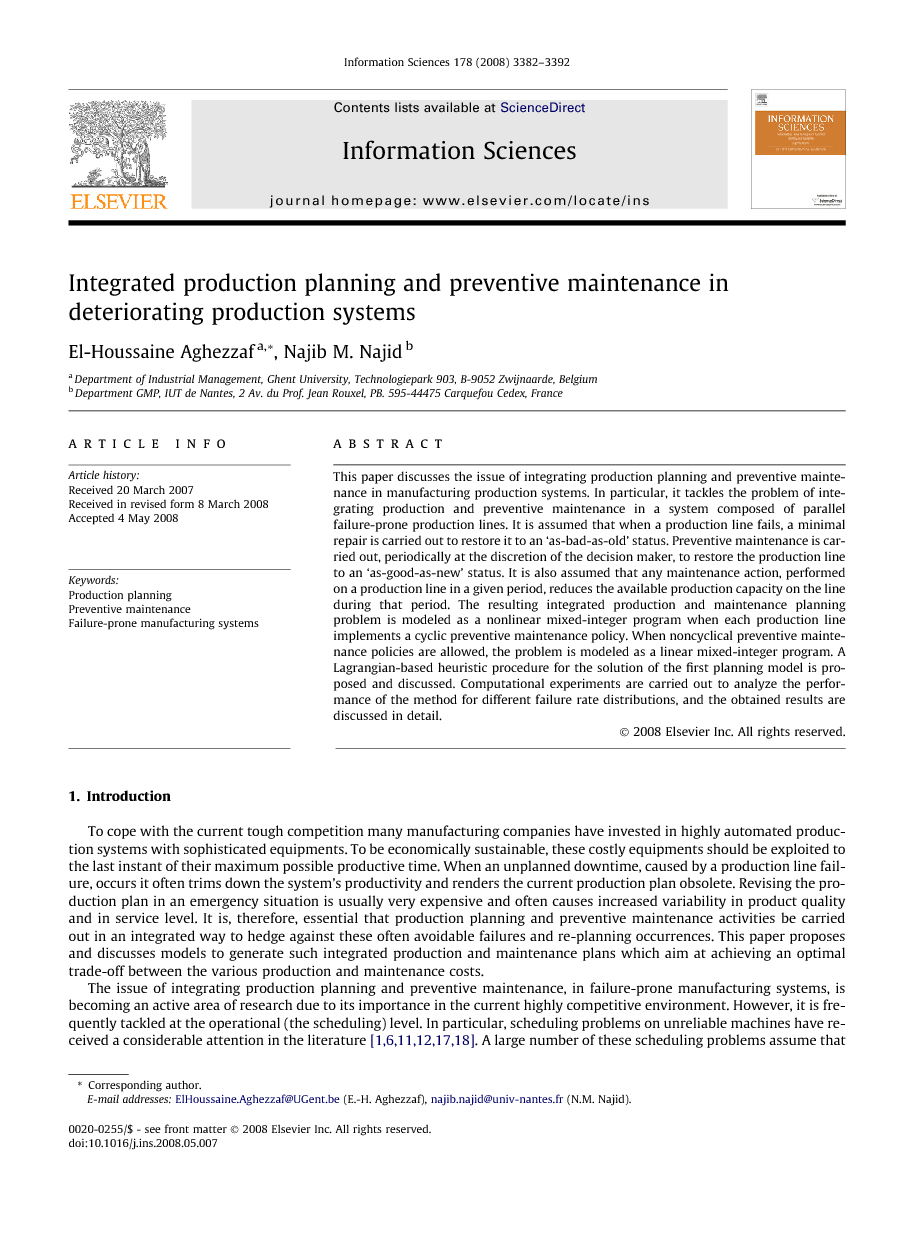 To cope with the current tough competition many manufacturing companies have invested in highly automated production systems with sophisticated equipments. To be economically sustainable, these costly equipments should be exploited to the last instant of their maximum possible productive time. When an unplanned downtime, caused by a production line failure, occurs it often trims down the system’s productivity and renders the current production plan obsolete. Revising the production plan in an emergency situation is usually very expensive and often causes increased variability in product quality and in service level. It is, therefore, essential that production planning and preventive maintenance activities be carried out in an integrated way to hedge against these often avoidable failures and re-planning occurrences. This paper proposes and discusses models to generate such integrated production and maintenance plans which aim at achieving an optimal trade-off between the various production and maintenance costs. The issue of integrating production planning and preventive maintenance, in failure-prone manufacturing systems, is becoming an active area of research due to its importance in the current highly competitive environment. However, it is frequently tackled at the operational (the scheduling) level. In particular, scheduling problems on unreliable machines have received a considerable attention in the literature [1], [6], [11], [12], [17] and [18]. A large number of these scheduling problems assume that maintenance periods are known in advance, and thus reduce to scheduling problems with machine availability constraints [1], [15] and [19]. A recent survey on scheduling problems with limited machine availability can be found in [20]. A general result is that these scheduling problems, with availability constraints, under different machine configurations and various objective functions are NP-hard [13] and [16]. Various heuristics as well as exact methods for their solution are proposed [3] and [8]. At the tactical level, there are only few papers discussing this issue. Wienstein and Chung [23] presented a three-part model to resolve the conflicting objectives of system reliability and profit maximization. An aggregate production plan is first generated, and then a master production schedule is developed to minimize the weighted deviations from the specified aggregate production goals. Finally, work center loading requirements, determined through rough cut capacity planning, are used to simulate equipment failures during the aggregate planning horizon. Several experiments are used to test the significance of various factors for maintenance policy selection. These factors include the category of maintenance activity, maintenance activity frequency, failure significance, maintenance activity cost, and aggregate production policy. Aghezzaf et al. [4] presented an integrated production and preventive maintenance planning model for a single-line production systems which can be minimal repaired at failure. They assumed that maintenance actions carried out on the production line reduce its capacity, and proposed a mathematical programming model to establish an optimal integrated production and maintenance plan for the single-line production systems. In Section 2, a mathematical programming model for the integrated production and maintenance problem in production systems implementing cyclic preventive maintenance policies is proposed. In Section 3, a heuristic solution algorithm for the solution of the proposed model is proposed and discussed. Section 4 presents an integrated production and maintenance planning model for systems implementing general preventive maintenance policies. The last section presents some computational experiment to analyze the performances of the proposed models and their algorithms. Finally, some concluding remarks are presented in Section 6.

This paper investigated the problem of integrating production planning and preventive maintenance in multi-line production systems subject to failures. It is assumed that the capacities of these production lines progressively decline as they produce due deterioration. Two mathematical programming models for the problem are proposed. The first model assumes that each production line of the system implements a cyclic preventive maintenance policy with a fixed cycle size. The second model relaxes this last restriction and establishes for each production line specific maintenance periods, which do not necessarily fall at equally distant epochs. The first model is an NP-hard nonlinear mixed integer program, for which a heuristic method based on Lagrangian relaxation is developed. The sub-problems, used to iteratively construct an approximate optimal solution, are single-line versions of the problem, one for each production line, and then a last sub-problem is a linear program used to assign demands to the production lines. The LP-relaxations of these single-line sub-problems are solved to provide marginal production costs on each line, and these marginal costs combined with subgradient multipliers are used to assign the demands to the production lines. A series of test problems were generated and solved with the Lagrangian-based solution procedure. The optimality gaps were assessed using lower bounds obtained with the second model, which is a linear mixed integer program. These results show that procedure performs fairly well in terms of solution gap. Computational times are still high for some cases. Improving the implementation of the procedure to reduce these times is now carried out.