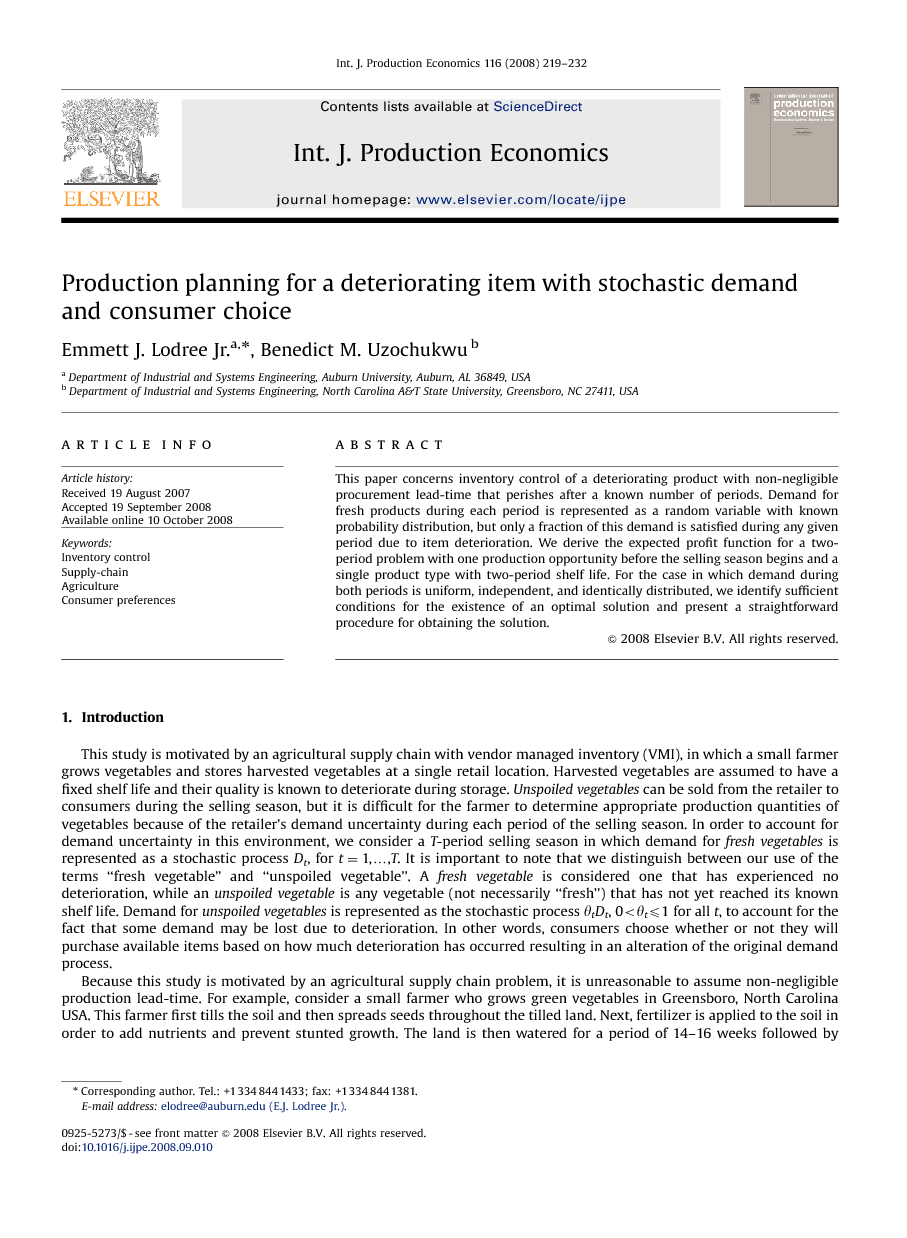 This paper concerns inventory control of a deteriorating product with non-negligible procurement lead-time that perishes after a known number of periods. Demand for fresh products during each period is represented as a random variable with known probability distribution, but only a fraction of this demand is satisfied during any given period due to item deterioration. We derive the expected profit function for a two-period problem with one production opportunity before the selling season begins and a single product type with two-period shelf life. For the case in which demand during both periods is uniform, independent, and identically distributed, we identify sufficient conditions for the existence of an optimal solution and present a straightforward procedure for obtaining the solution.

This study is motivated by an agricultural supply chain with vendor managed inventory (VMI), in which a small farmer grows vegetables and stores harvested vegetables at a single retail location. Harvested vegetables are assumed to have a fixed shelf life and their quality is known to deteriorate during storage. Unspoiled vegetables can be sold from the retailer to consumers during the selling season, but it is difficult for the farmer to determine appropriate production quantities of vegetables because of the retailer's demand uncertainty during each period of the selling season. In order to account for demand uncertainty in this environment, we consider a T-period selling season in which demand for fresh vegetables is represented as a stochastic process Dt, for t=1,…,T. It is important to note that we distinguish between our use of the terms “fresh vegetable” and “unspoiled vegetable”. A fresh vegetable is considered one that has experienced no deterioration, while an unspoiled vegetable is any vegetable (not necessarily “fresh”) that has not yet reached its known shelf life. Demand for unspoiled vegetables is represented as the stochastic process θtDt, 0<θt⩽1 for all t, to account for the fact that some demand may be lost due to deterioration. In other words, consumers choose whether or not they will purchase available items based on how much deterioration has occurred resulting in an alteration of the original demand process. Because this study is motivated by an agricultural supply chain problem, it is unreasonable to assume non-negligible production lead-time. For example, consider a small farmer who grows green vegetables in Greensboro, North Carolina USA. This farmer first tills the soil and then spreads seeds throughout the tilled land. Next, fertilizer is applied to the soil in order to add nutrients and prevent stunted growth. The land is then watered for a period of 14–16 weeks followed by harvesting (these processes occur periodically between the months of May and October because of favorable weather conditions). Thus if L represents the lead time associated with the abovementioned production process, then demand during period t of the selling season can only be met from production processes that began during period t−L or earlier. For this farmer's crop production problem, the role of production lead time is critical and should not be ignored. Therefore the condition L=0, which is often assumed to simplify models of inventory systems, is very much unrealistic. The agricultural production process is not only time consuming, but also costly. When deciding how much land will be used for production, the farmer must consider the costs associated watering, fertilizing, pest control, and harvesting. Thus the farmer risks wasting these and other production investments if harvested vegetables cannot be sold. On the other hand, the farmer risks the negative consequences of lost sales (such as lost revenue and loss of customer goodwill) if the amount of harvested vegetables is insufficient with respect to satisfying demand. Under these conditions, the farmer's problem is to determine planting batch sizes during each period of the planting season (May–October) such that expected profits associated with sales, shortages, and production investments are maximized. Although this study is motivated by production planning in the agricultural sector, some of these same issues are encountered in manufacturing and service industries. As a specific example, consider a manufacturer (located in the southeastern United States) who produces high voltage electrical switches and devices that control power grids in electrical utility substations. Demand for switches is highly variable, and component parts for producing switches are characterized by procurement lead times of up to 10 weeks. Holding large amounts of inventory is undesirable because certain parts are expensive and deteriorate while in storage. Under these conditions, the manufacturer must determine cost minimizing inventory control policies for component parts that meet minimum service level requirements. More general examples include global supply chain management in electronics and apparel industries, both of which are characterized demand uncertainties, long lead times, deteriorating and perishable items, and consumer behavior. Unlike the agricultural industry in which deterioration and perishability refers to the physical decay of products, stock deterioration and perishability (i.e., obsolescence) in electronics and apparel industries have to do more with economic value than physical condition. Therefore notwithstanding our motivation based on the agriculture industry, this study is also applicable to inventory control problems in some manufacturing and service industries. The remainder of this paper is organized as follows. The literature review is presented in Section 2, and a mathematical model for a special case of the abovementioned crop production problem is introduced in 3 and 4. The bulk of our efforts are presented in Section 5, which entails a derivation of the expected profit function for the model in Section 4 with iid uniform demand distributions during the selling season. Section 6 discusses sufficient conditions for the existence an optimal solution and also presents a straightforward procedure that generates the optimal solution whenever the optimality conditions are satisfied. A brief summary and future research directions are discussed in Section 7.

This paper is motivated by a crop production planning problem encountered by a farmer who sells vegetables to a single retailer facing stochastic demand in a vendor managed inventory relationship. A two-period inventory model with product deterioration, stochastic demand, nonzero lead-time, and consumer choice is introduced to address this problem. The approach to modeling stock deterioration presented in this paper seems to differ from the existing approaches presented in the inventory control literature. Traditional approaches describe how stock is depleted due to demand and deterioration, but do not account for the fact that deterioration might affect the demand process itself. Consequently the model presented in this paper establishes a direct link between stock deterioration, consumer choice, and demand, which in turn represents a new approach to modeling stock deterioration as well as a more general interpretation of consumer choice. A heuristic procedure is introduced to solve this problem, and it is shown that this procedure always leads to an optimal solution. This paper can be extended in several ways. For instance, an n-period selling season can be considered. A model with an n-period selling season introduces additional possibilities such as a fixed product shelf life that is less than n or random product shelf life. For products with less extensive production lead times, multiple production opportunities can be considered. The inherent complexity associated with solving the two-period problem with uniformly distributed demand and one production run as shown in this paper suggests that heuristic or simulation procedures will be necessary for generating competitive inventory control policies for the abovementioned extensions. As such, the results presented in this paper can be useful in evaluating the performance of approximate procedures developed for solving more complex generalizations of the proposed model.