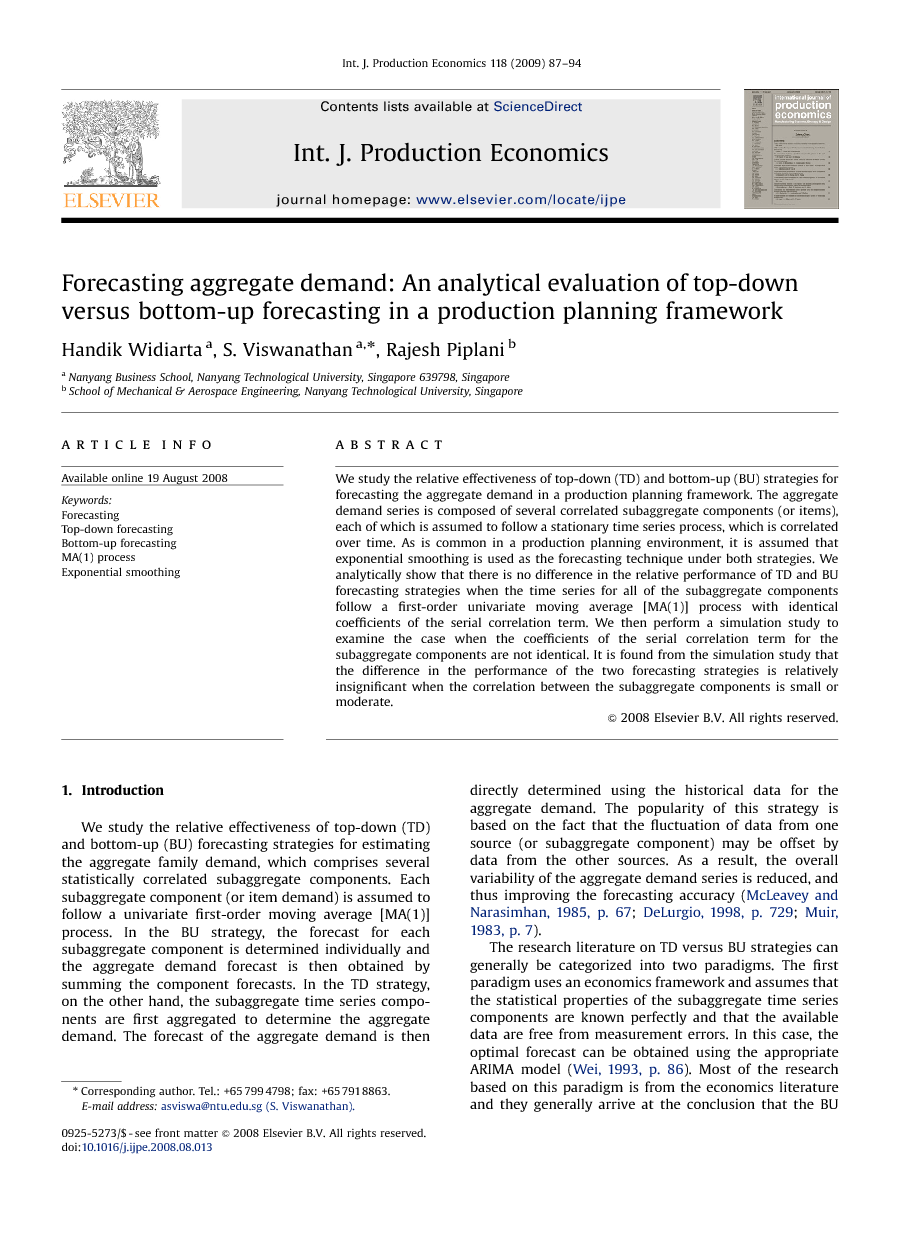 We study the relative effectiveness of top-down (TD) and bottom-up (BU) forecasting strategies for estimating the aggregate family demand, which comprises several statistically correlated subaggregate components. Each subaggregate component (or item demand) is assumed to follow a univariate first-order moving average [MA(1)] process. In the BU strategy, the forecast for each subaggregate component is determined individually and the aggregate demand forecast is then obtained by summing the component forecasts. In the TD strategy, on the other hand, the subaggregate time series components are first aggregated to determine the aggregate demand. The forecast of the aggregate demand is then directly determined using the historical data for the aggregate demand. The popularity of this strategy is based on the fact that the fluctuation of data from one source (or subaggregate component) may be offset by data from the other sources. As a result, the overall variability of the aggregate demand series is reduced, and thus improving the forecasting accuracy (McLeavey and Narasimhan, 1985, p. 67; DeLurgio, 1998, p. 729; Muir, 1983, p. 7). The research literature on TD versus BU strategies can generally be categorized into two paradigms. The first paradigm uses an economics framework and assumes that the statistical properties of the subaggregate time series components are known perfectly and that the available data are free from measurement errors. In this case, the optimal forecast can be obtained using the appropriate ARIMA model (Wei, 1993, p. 86). Most of the research based on this paradigm is from the economics literature and they generally arrive at the conclusion that the BU strategy may not do worse than the TD strategy in estimating the aggregate demand or the data series at the family level (Aigner and Goldfeld, 1973; Dunn et al., 1976; Kohn, 1982; Rose, 1977; Tiao and Guttman, 1980). Both TD and BU forecasting would perform equally well only when the subaggregate components are uncorrelated and have identical stochastic structures (Rose, 1977; Lutkepohl, 1984). The second paradigm, which is commonly used in a production planning framework, assumes that the data-generating process is not known a priori. This assumption is reasonable as, in practice, the decision makers may not want to spend too much time and effort examining and defining the characteristics of the data-generating process prior to determining the forecasting model, as is required by ARIMA. Besides in a production planning framework, forecasts are required on a periodic basis, sometimes as often as daily or even hourly basis. Typically, forecasting is done simultaneously for several different, but related items in computerized systems with minimal human intervention. Therefore, it is quite impractical to determine the optimal ARIMA model for each item. Hence, the common forecasting technique adopted in this case is a relatively simple method such as exponential smoothing, which is easy to implement. Papers in this paradigm include Barnea and Lakonishok (1980), Dangerfield and Morris (1992), Fliedner (1999) and Weatherford et al. (2001). In this paper, we adopt the second paradigm. All the earlier studies in this paradigm are based on simulation. To our knowledge, none of the earlier papers have analytically investigated the relative performance of TD and BU strategies in a production planning framework, when the underlying time series of the subaggregate components follow an MA(1) process. This paper attempts to fill this gap and also hopes to provide guidelines for selecting an appropriate forecasting strategy under particular circumstances. We analytically show in this paper that the forecast effectiveness for both TD and BU strategies is identical when the subaggregate time series components follow an MA(1) process with identical coefficients of the serial correlation term. We further perform a simulation study to examine the case when the coefficients of the serial correlation term of the subaggregate time series components are not identical. The simulation study reveals that the relative superiority of the two strategies depends on specific parameters of the time series for the subaggregate components. However, the difference in the performance of the two forecasting strategies is relatively insignificant when the subaggregate components are statistically independent or their correlation is relatively small. The remainder of this paper is organized as follows. Section 2 describes the notation and assumptions used in the rest of the paper. Section 3 focuses on the analytical evaluation of the TD and BU strategies. It is then followed by an analysis of the findings of the simulation study in Section 4. Finally, some concluding remarks and possible directions for future research are discussed in Section 5.