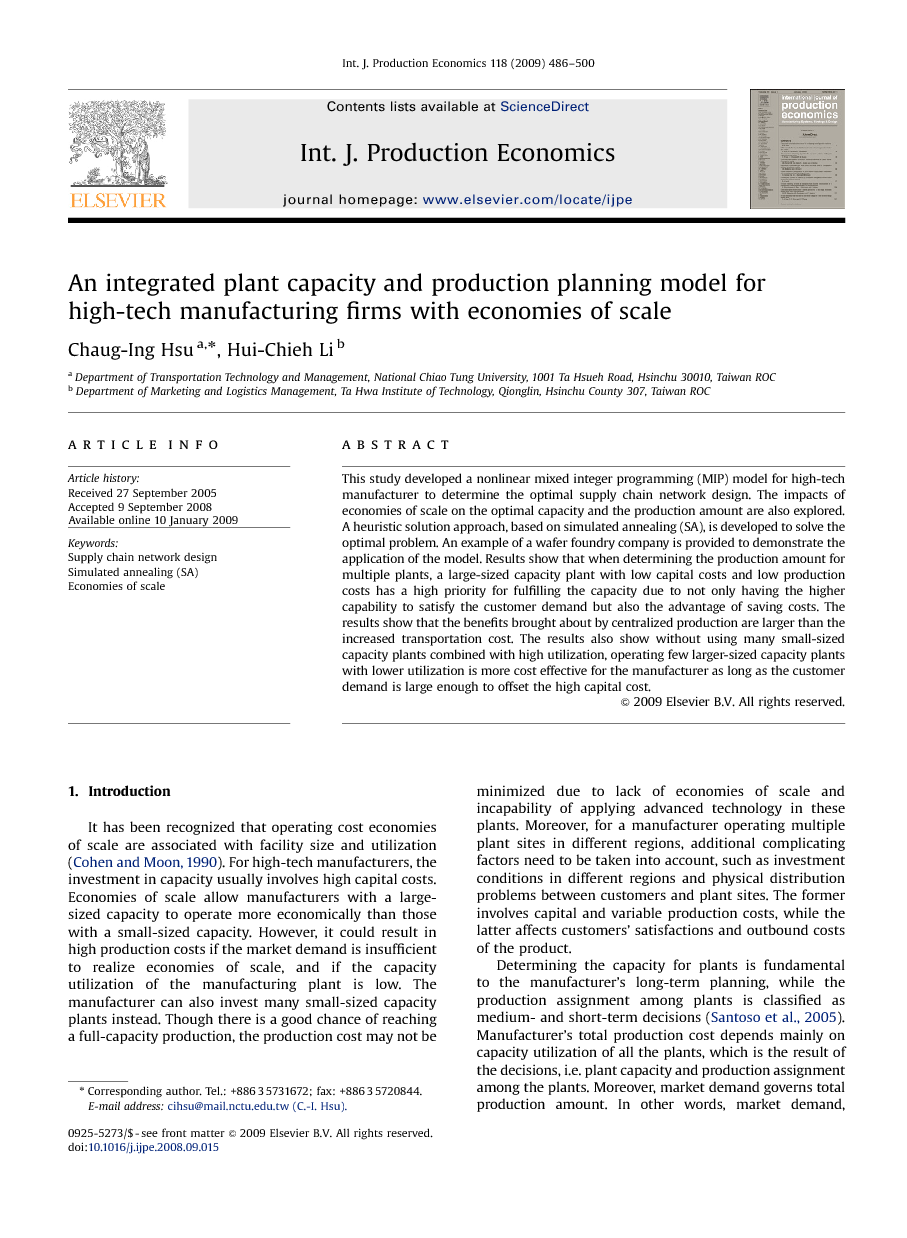 This study developed a nonlinear mixed integer programming (MIP) model for high-tech manufacturer to determine the optimal supply chain network design. The impacts of economies of scale on the optimal capacity and the production amount are also explored. A heuristic solution approach, based on simulated annealing (SA), is developed to solve the optimal problem. An example of a wafer foundry company is provided to demonstrate the application of the model. Results show that when determining the production amount for multiple plants, a large-sized capacity plant with low capital costs and low production costs has a high priority for fulfilling the capacity due to not only having the higher capability to satisfy the customer demand but also the advantage of saving costs. The results show that the benefits brought about by centralized production are larger than the increased transportation cost. The results also show without using many small-sized capacity plants combined with high utilization, operating few larger-sized capacity plants with lower utilization is more cost effective for the manufacturer as long as the customer demand is large enough to offset the high capital cost.

Past studies have extensively investigated plant location issues. Most of these studies dealt with the problem by constructing MIP models in which the plant is constrained to serve a single warehouse or customer. These studies focused mainly on developing an approximation procedure and on the efficiency of the proposed heuristics. However, the impact of high capital cost on the optimal plant capacity, and the production amount among the plants of different-sized were rarely discussed. This study constructed a nonlinear MIP model to minimize the average total cost per unit product subject to constraints such as satisfying customer demand in various geographic regions, relationships between supply flows and demand flows within the physical configuration, and the production limitation of different size plants. This study showed how economies of scale can be considered in solving the capacity and production problems. This study also showed that the capacity utilization as well as the production amount in the short run, and the size of capacity of multiple plants in the long run are related, and that those two factors influence the total cost. Note that the study focused on plant capacity and production planning issues in wafer fabrication industry, the findings may only be applied to wafer fabrication manufacturers. A case study of T-company in Taiwan, which is the world's largest dedicated semiconductor foundry, was provided to demonstrate the application of the proposed models. The results show that because of the high customer demand, the manufacturer can operate the plants with large-sized capacity combined with full-capacity production, thereby lowering the production cost. Since the government of Taiwan provided incentives for developing the high-tech industry, and since there is a large local customer demand due to the economies of agglomeration in the semiconductor industry, T-company’ core operations are based in FABs in Taiwan. The results of this study also show that when determining the production amount for multiple plants, those with large-sized capacity combined with low capital and variable production costs have a higher priority in filling this capacity, compared to those with small-sized capacity combined with relative high capital and variable production costs. The reason is not only they have higher capability to satisfy customer demand, but also they are more cost effective. Although there is a trade-off between production cost economies and transportation cost diseconomies, the results show that the benefits in terms of cost savings for the wafer foundry company brought by centralized production are larger than the increased transportation cost as a result of decentralization. Therefore, this finding suggests that the manufacturer may adopt a production strategy of centralizing production in manufacturing plants with large-sized capacity and then shipping the products to customer in different regions. As to raw material procurement, the results show that vendors providing low purchase price are mostly active even there exists a high fixed cost, i.e. searching the active vender is difficult. Since there is low unit purchase cost, a large-amount procurement from the vendor brings great advantage for the manufacturer thereby outweighing the disadvantage of high fixed cost. Also, active vendors tend to serve manufacturing plants that are nearby. In addition, to reduce outbound costs, the product should be shipped from a manufacturing plant to a customer that is located within a short distance. The results also show that the production cost is the highest of all costs for a wafer foundry. This finding implies that the wafer foundry industry shows production with economies of scale, and that this production is the most valued-added in the entire supply chain. Therefore, the manufacturer must be aware of the impact on the total cost of capacity utilization by its manufacturing plants with different-sized capacity. The results also show that a location with very high capital and variable production costs is not recommended when the demand is extremely low. Moreover, as long as the customer demand is large enough to offset the high capital cost, operating a large-sized capacity plant is recommended even if the capacity utilization is low. In other words, operating a few small-sized capacity plants with high-capacity utilization may not yield a decreased production cost as compared with that from operating merely one larger-sized capacity plant with lower capacity utilization. In sum, the integrated plant capacity and production model developed in this study provides a highly effective tool that enables high-tech manufacturers to evaluate the expansion, contraction, or reallocation of their production tasks among various plants. This model can be applied to investigate the relationship between the total average production cost and production allocation when deciding whether to operate a new manufacturing plant, or to develop a new technology, such as 0.09 μm process technology, which may lead to larger production. Due to yield issues (dies per wafer) of bigger size wafers, and advanced technology involved in operating lager sized wafer FABs, the key findings of the paper may only be related to the wafer fabrication industry. However, the implication of the finding is worth noted for other manufacturing settings. When the transportation cost of the product is relatively small as compared to its production cost, the finding suggests a production strategy of centralizing production in large-sized capacity plants and then shipping the products to customer in different regions. And the strategy is appropriate when the production facilities have huge setup costs and rather low variable production costs.