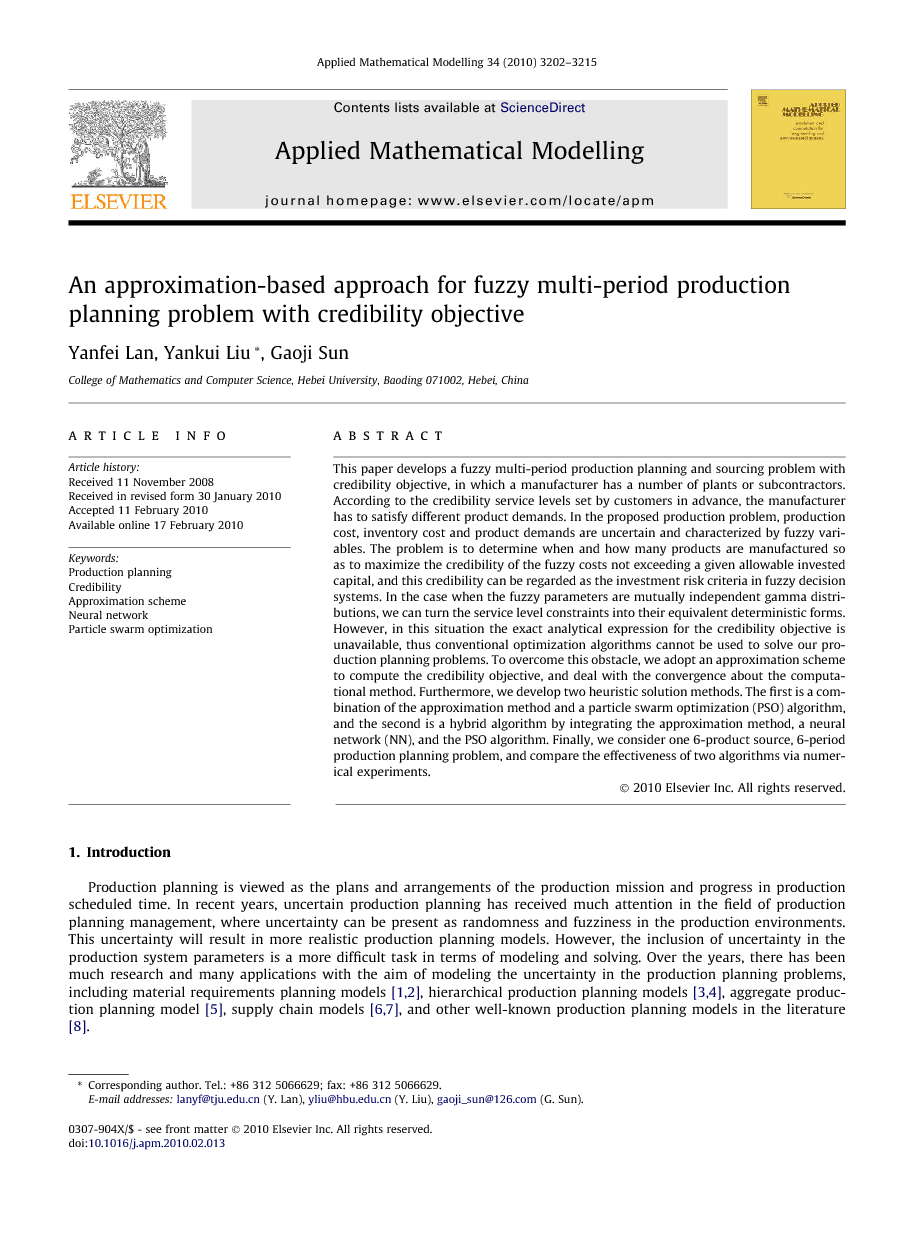 This paper develops a fuzzy multi-period production planning and sourcing problem with credibility objective, in which a manufacturer has a number of plants or subcontractors. According to the credibility service levels set by customers in advance, the manufacturer has to satisfy different product demands. In the proposed production problem, production cost, inventory cost and product demands are uncertain and characterized by fuzzy variables. The problem is to determine when and how many products are manufactured so as to maximize the credibility of the fuzzy costs not exceeding a given allowable invested capital, and this credibility can be regarded as the investment risk criteria in fuzzy decision systems. In the case when the fuzzy parameters are mutually independent gamma distributions, we can turn the service level constraints into their equivalent deterministic forms. However, in this situation the exact analytical expression for the credibility objective is unavailable, thus conventional optimization algorithms cannot be used to solve our production planning problems. To overcome this obstacle, we adopt an approximation scheme to compute the credibility objective, and deal with the convergence about the computational method. Furthermore, we develop two heuristic solution methods. The first is a combination of the approximation method and a particle swarm optimization (PSO) algorithm, and the second is a hybrid algorithm by integrating the approximation method, a neural network (NN), and the PSO algorithm. Finally, we consider one 6-product source, 6-period production planning problem, and compare the effectiveness of two algorithms via numerical experiments.

When optimal production decisions must be reached in an environment beset with possibilistic uncertainty, not only the formulation of the decision model requires a deeper probing of the aspirations criteria in order to give to the optimization problem its appropriate form, but often significant computational obstacles must be overcome to find optimal production decisions. In these two aspects, the major new contributions of the current development are as follows. (i)Based on credibility criteria in the model formulation, we developed a new class of fuzzy production planning problems, in which the production cost, inventory cost and product demands were characterized by fuzzy variables. In addition, a manufacturer has a number of plants and subcontractors and has to meet the product demands according to various credibility service levels prescribed by its customers. (ii) When product demands are mutually independent gamma fuzzy variables, we have turned the credibility level constraints into their equivalent deterministic forms (see Theorem 1 and Theorem 2). However, in this situation, the analytical expression about the credibility objective of problem (2) is still unavailable. To overcome this obstacle, the approximation method is adopted to compute the credibility objective. The reasonableness about the method has also been discussed (see Theorem 3). (iii) Since production planning problem (14) is neither linear nor convex, conventional optimization algorithms cannot be employed to solve it. In this paper, two heuristic solution methods were designed to solve problem (14). Algorithm 1 is a combination of the approximation method and the PSO algorithm, while Algorithm 2 integrates the the approximation method, an NN and the PSO algorithm. The numerical experiments about problem (14) have been made to compare the effectiveness of two algorithms. The computational results demonstrated that the optimal objective values obtained by Algorithm 1 and Algorithm 2 have no obvious deviations, but Algorithm 2 can save much time compared with Algorithm 1. From the computational viewpoint, we concluded that Algorithm 2 is more effective than Algorithm 1 when we employed them to solve production planning problem (14).