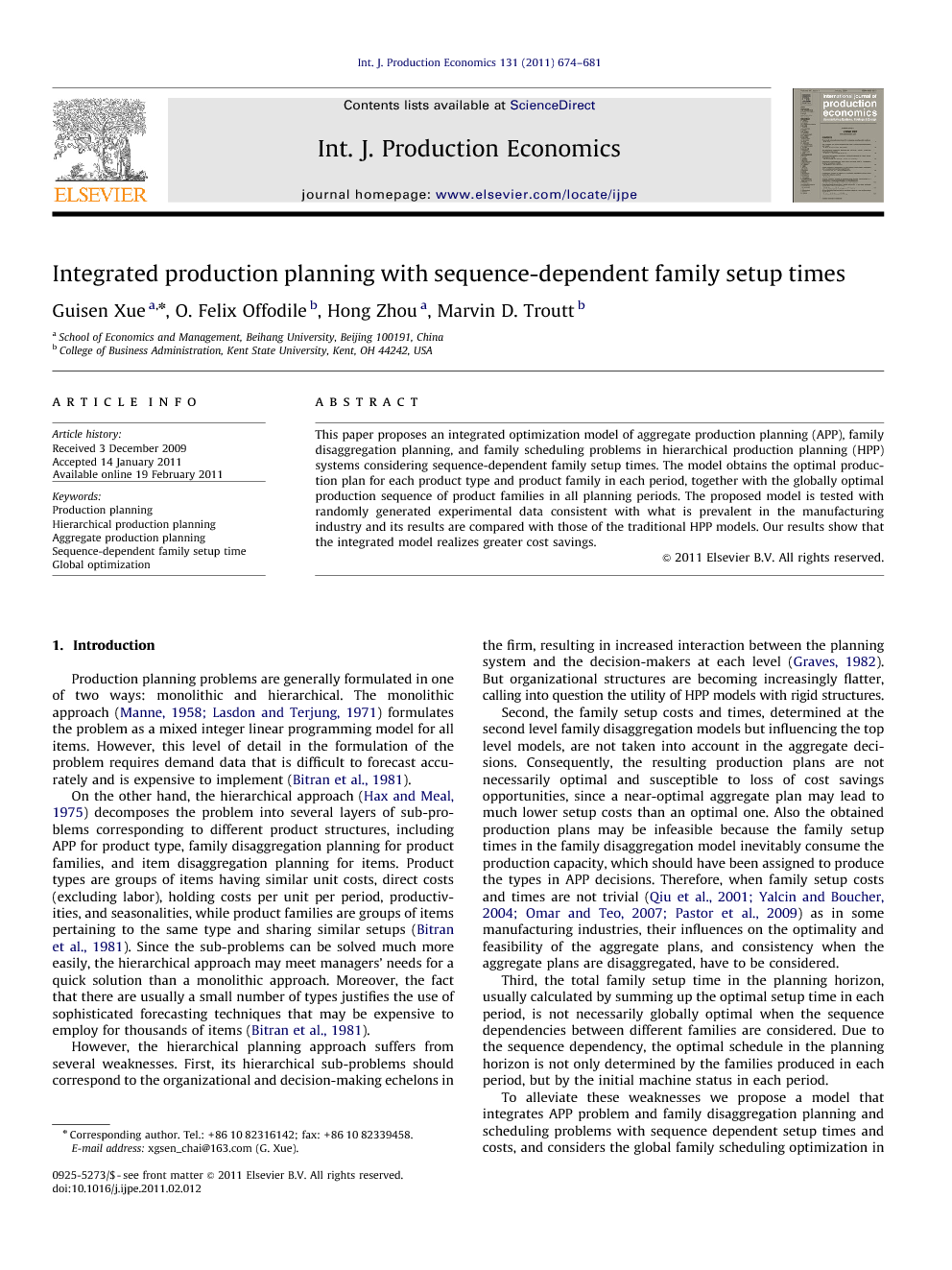 This paper proposes an integrated optimization model of aggregate production planning (APP), family disaggregation planning, and family scheduling problems in hierarchical production planning (HPP) systems considering sequence-dependent family setup times. The model obtains the optimal production plan for each product type and product family in each period, together with the globally optimal production sequence of product families in all planning periods. The proposed model is tested with randomly generated experimental data consistent with what is prevalent in the manufacturing industry and its results are compared with those of the traditional HPP models. Our results show that the integrated model realizes greater cost savings.

Production planning problems are generally formulated in one of two ways: monolithic and hierarchical. The monolithic approach (Manne, 1958 and Lasdon and Terjung, 1971) formulates the problem as a mixed integer linear programming model for all items. However, this level of detail in the formulation of the problem requires demand data that is difficult to forecast accurately and is expensive to implement (Bitran et al., 1981). On the other hand, the hierarchical approach (Hax and Meal, 1975) decomposes the problem into several layers of sub-problems corresponding to different product structures, including APP for product type, family disaggregation planning for product families, and item disaggregation planning for items. Product types are groups of items having similar unit costs, direct costs (excluding labor), holding costs per unit per period, productivities, and seasonalities, while product families are groups of items pertaining to the same type and sharing similar setups (Bitran et al., 1981). Since the sub-problems can be solved much more easily, the hierarchical approach may meet managers' needs for a quick solution than a monolithic approach. Moreover, the fact that there are usually a small number of types justifies the use of sophisticated forecasting techniques that may be expensive to employ for thousands of items (Bitran et al., 1981). However, the hierarchical planning approach suffers from several weaknesses. First, its hierarchical sub-problems should correspond to the organizational and decision-making echelons in the firm, resulting in increased interaction between the planning system and the decision-makers at each level (Graves, 1982). But organizational structures are becoming increasingly flatter, calling into question the utility of HPP models with rigid structures. Second, the family setup costs and times, determined at the second level family disaggregation models but influencing the top level models, are not taken into account in the aggregate decisions. Consequently, the resulting production plans are not necessarily optimal and susceptible to loss of cost savings opportunities, since a near-optimal aggregate plan may lead to much lower setup costs than an optimal one. Also the obtained production plans may be infeasible because the family setup times in the family disaggregation model inevitably consume the production capacity, which should have been assigned to produce the types in APP decisions. Therefore, when family setup costs and times are not trivial (Qiu et al., 2001, Yalcin and Boucher, 2004, Omar and Teo, 2007 and Pastor et al., 2009) as in some manufacturing industries, their influences on the optimality and feasibility of the aggregate plans, and consistency when the aggregate plans are disaggregated, have to be considered. Third, the total family setup time in the planning horizon, usually calculated by summing up the optimal setup time in each period, is not necessarily globally optimal when the sequence dependencies between different families are considered. Due to the sequence dependency, the optimal schedule in the planning horizon is not only determined by the families produced in each period, but by the initial machine status in each period. To alleviate these weaknesses we propose a model that integrates APP problem and family disaggregation planning and scheduling problems with sequence dependent setup times and costs, and considers the global family scheduling optimization in the planning horizon. First, the model is robust enough to fit different organizational structures, providing flexibility for the decision maker. This is because it cannot only plan the production and scheduling of types for top-level managers, but also decompose the aggregate plans into detailed production plans of families for mid-level managers, and even provide scheduling information for the scheduling staff on the shop floor. When the organizational structures become flatter, managers at each layer can easily extract the relevant information (production plans of types or families) they need from the model. Second, the infeasibility of aggregate plans due to capacity consumption by family setup times can be eliminated. The model also maintains consistency when aggregate plans are disaggregated, and ensures the optimality of the production plans and schedules, or as close to optimal as possible. Third, the globally optimal family schedules in all periods of the planning horizon are concatenated to form an optimal schedule, rather than optimizing them period by period. The latter sequential family scheduling is more likely to be trapped in a local optimum, since the schedule in one period may result in an inferior schedule in the subsequent period. The remainder of this paper is organized as follows. In Section 2, the related literature is reviewed. In Section 3 a representative traditional HPP system by Ozdamar et al. (1998) is presented. Section 4 formulates the proposed integrated model. In Section 5, the corresponding benchmark problems of the proposed integrated approach are presented. The performance of the integrated model is validated with randomly generated experimental data in Section 6, together with some managerial implications of the study. We discuss the conclusions and future research directions in Section 7.

Our integrated APP and family disaggregation model considers sequence-dependent family setup times as part of the production capacity. These setup times are incorporated into the original capacity constraints of the APP model to ensure feasibility of production plans. It is also seen that the family setup costs and all costs considered in traditional APP models are components of the objective function to ensure optimality. A series of problem sets with different unit inventory costs and seasonalities are employed to compare the performance of the integrated model and traditional HPP models. Results show that the total cost of the integrated model is consistently less than that of the HPP models. For all problem sets with the same seasonality, the total cost is increasing with the unit inventory cost. However the variation of unit inventory cost only brings little fluctuation in total costs. The cost savings of the integrated model over HPP models brought about by varying unit inventory costs are constant. For the problem sets with the same unit inventory cost, the total cost increases drastically with increasing seasonality, as did the cost savings realized through the integrated model. Finally, the integrated model is applied to a mold manufacturing plant. Our results show that the integrated model can save as much as $672,570, compared with the adjustment Rule I that the plant is using. Meanwhile, the production plans are also reasonable and feasible. The proposed integrated model with higher solution complexity and lower total cost, and adjustment Rule II with lower solution complexity and higher total cost can be used to meet differing managerial requirements. The integrated approach proposed in this paper can be used in other similar hierarchical systems with some interactions between different levels, such as the hierarchical system of machine layout and production planning problem. Our work can be extended in two ways. First, relax the assumption that all families are produced in each period. Without this assumption the integrated model will be harder to solve. Therefore, metaheuristics like , Simulated Annealing and Tabu search, could be used to solve the problem to obtain an acceptable solution in a reasonable amount of time. Second, incorporate pricing decisions into the integrated model with varying production costs in different periods. Deng and Yano (2006) suggest that manufacturers should be more aggressive in suppressing demand prior to peak periods in the presence of capacity constraints while continuing to produce at capacity and building inventory so as to increase supply for the most profitable periods. That is, the seasonal variations in demand should be enlarged under the condition of constant production cost, but in fact the production costs during the peak season are higher since costly overtime, even subcontracting, is used to meet the demand. Therefore, joint production and pricing decisions with varying production costs in different periods are worth further study.