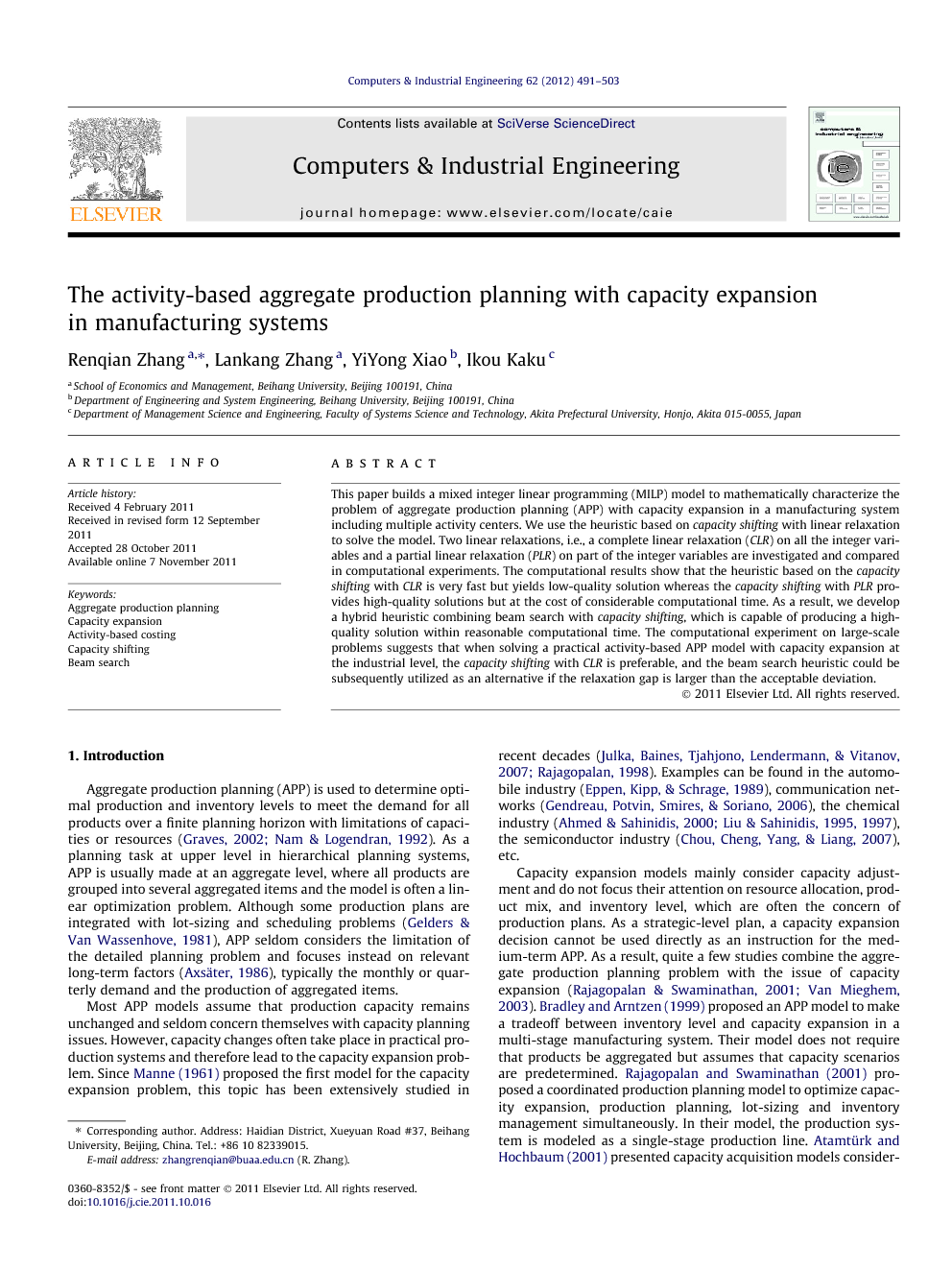 In this paper, we build an aggregate production planning model considering capacity expansion for the activity-based manufacturing system. The factors considered in our model include production and inventory costs, purchasing cost and the storage cost of activity cells, the common and individual fixed costs of capacity expansion, time-varying activity parameters, and age effect on activity cells, etc. Our model is a general formulation of the APP with capacity expansion in activity-based manufacturing system, which can be adapted to different cases. For instance, fixing the capacity parameters yields a pure APP model for the activity-based manufacturing system. Omitting At can be used in the case of no common fixed cost considered during capacity expansion and constraining parameters do not change with time periods and cell age can be adaptive to the case of a static environment. Or the model omitting Hkt can be employed in cases without the storage cost of idle cells. To solve the model, we firstly investigate the heuristics based on capacity shifting with complete linear relaxation (CLR) and partial linear relaxation (PLR), respectively. A computational study shows that the capacity shifting with CLR is very efficient in terms of computational time but cannot guarantee a high-quality solution. By contrast, the capacity shifting with PLR can yield high-quality solution but is time-consuming. Therefore, we propose a hybrid heuristic combining the beam search algorithm with the capacity shifting approach, which results in a better tradeoff between computational time and solution quality. Especially, the proposed beam search tree constructed through shifting the capacity of individual activity center can also be applied to constructing beam search-based heuristics for other models of APP with capacity expansion. Moreover, the computational study suggests that to solve a practical APP problem with capacity expansion, the capacity shifting approach with CLR should be employed to perform a test at first, and then the beam search heuristic can subsequently be used if the relaxation gap of CLR is larger than the acceptable deviation. The most possible extension of the proposed model is to integrate more detailed planning, e.g., lot-sizing and scheduling. This will lead to a mixed integer nonlinear programming model that is more intractable because of entanglement with capacity expansion, where some new solution algorithms are needed. Moreover, although this study is capacity expansion relevant, the proposed APP model is not recommended for making the long-term capacity planning decision because capacity planning is more concentrated in factors of longer time period, e.g., the development of technologies, uncertainties from market, etc. As a result, adapting the model fit for the long-term capacity planning decision leads to another possible extension of this study.