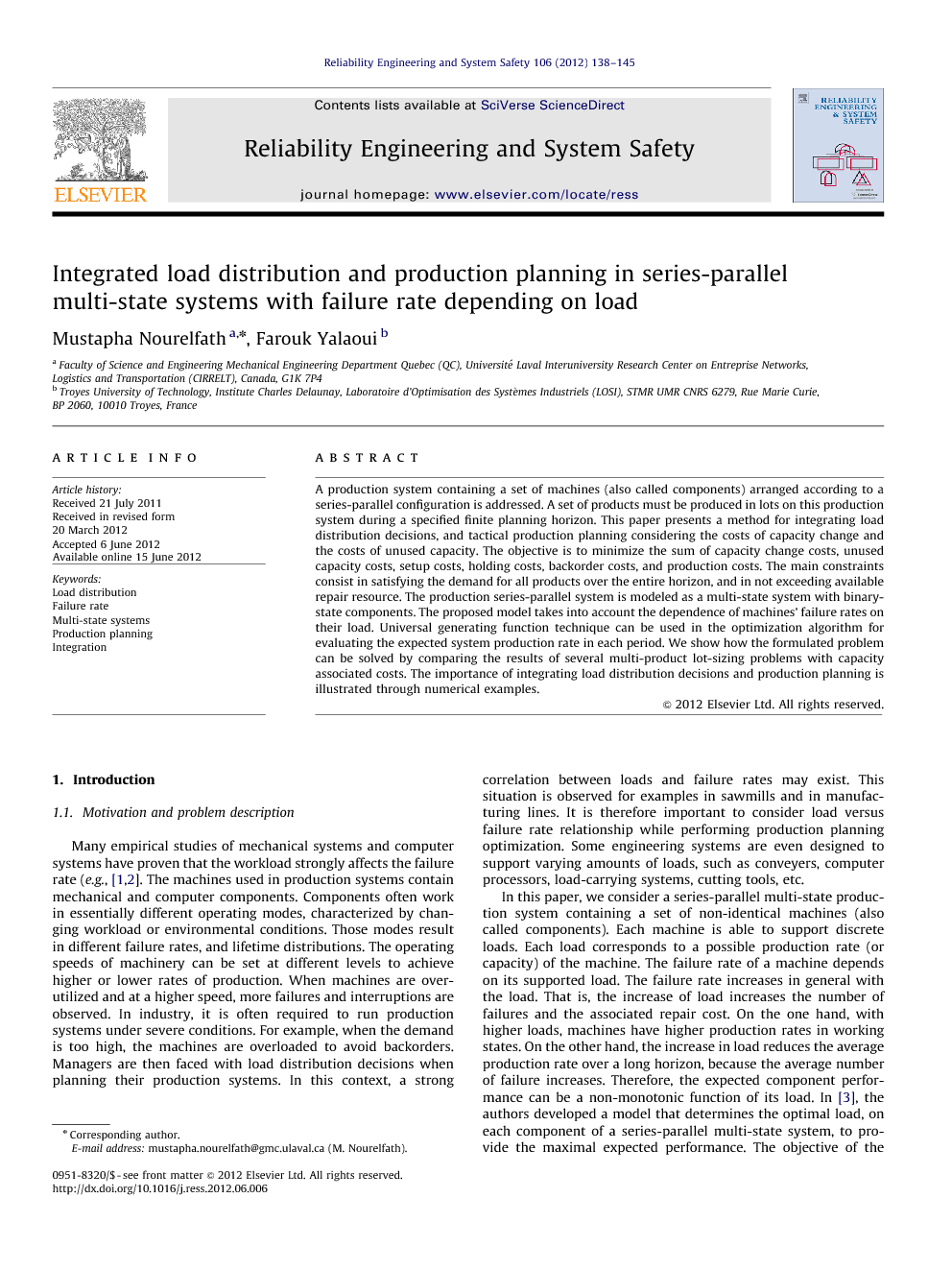 A production system containing a set of machines (also called components) arranged according to a series-parallel configuration is addressed. A set of products must be produced in lots on this production system during a specified finite planning horizon. This paper presents a method for integrating load distribution decisions, and tactical production planning considering the costs of capacity change and the costs of unused capacity. The objective is to minimize the sum of capacity change costs, unused capacity costs, setup costs, holding costs, backorder costs, and production costs. The main constraints consist in satisfying the demand for all products over the entire horizon, and in not exceeding available repair resource. The production series-parallel system is modeled as a multi-state system with binary-state components. The proposed model takes into account the dependence of machines' failure rates on their load. Universal generating function technique can be used in the optimization algorithm for evaluating the expected system production rate in each period. We show how the formulated problem can be solved by comparing the results of several multi-product lot-sizing problems with capacity associated costs. The importance of integrating load distribution decisions and production planning is illustrated through numerical examples.

In this paper, we studied the problem of integrating load distribution and production planning in the context of multi-state systems. This problem is important since it considers the load versus failure rate relationship while optimizing planning of production systems. The integrated objective is to minimize the sum of capacity change costs, unused capacity costs, setup costs, holding costs, backorder costs, and production costs. The main constraints consist in satisfying the demand for all products over the entire horizon, and in not exceeding available repair resource. A method was proposed to evaluate the average production system capacity per period. This method is based on multi-state reliability concepts. For each chosen LD solution, the optimization problem is solved as a multi-product lot-sizing problem with capacity associated costs. It was illustrated using a numerical example that integrating the two decisions making processes resulted in an improvement. The obtained integrated plan provides simultaneously the quantities of items to be produced for each period, and the optimal capacity or load on each machine. It was shown by numerical examples that the proposed model may improve the service level, and allows for a better trade-off between the parameters of load distribution and production planning. To solve the proposed integrated model, a method using an exhaustive evaluation of LD alternatives was proposed. In this method, all the LD solutions are evaluated. However, for large problems, this approach results in a worst case of a huge number of lot-sizing problems to be solved. Because such a method may solve efficiently only small-size problems, we are currently developing a heuristic approach to deal with the LD selection task in our integrated production and LD planning model for multi-state series-parallel systems. Finally, an important assumption of the paper is that the failure rate increases with the load. Although this situation has been observed by the authors in actual industrial systems, there is a need for empirical studies to define the parameters of the load-failure relationship model.