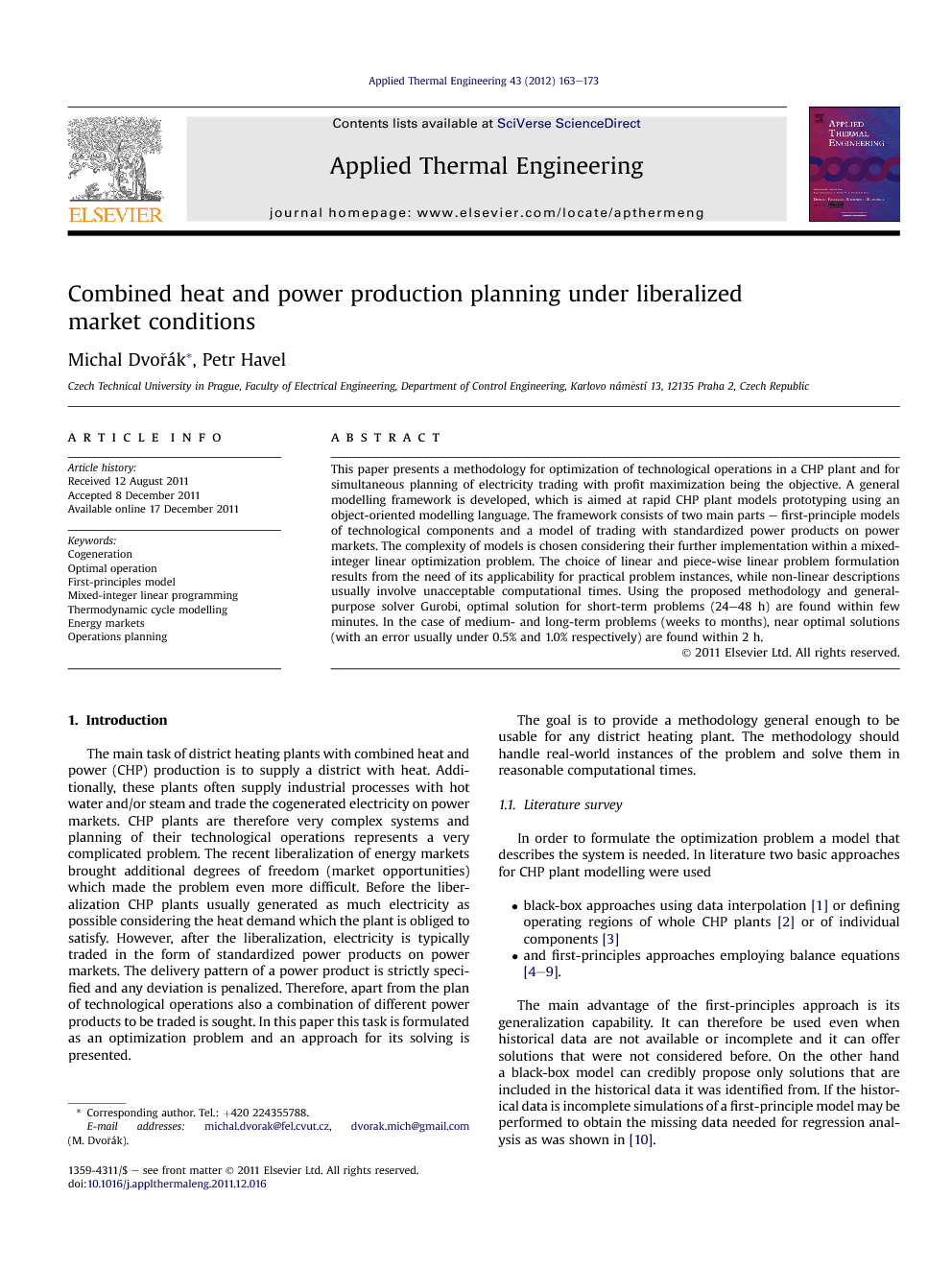 This paper presents a methodology for optimization of technological operations in a CHP plant and for simultaneous planning of electricity trading with profit maximization being the objective. A general modelling framework is developed, which is aimed at rapid CHP plant models prototyping using an object-oriented modelling language. The framework consists of two main parts – first-principle models of technological components and a model of trading with standardized power products on power markets. The complexity of models is chosen considering their further implementation within a mixed-integer linear optimization problem. The choice of linear and piece-wise linear problem formulation results from the need of its applicability for practical problem instances, while non-linear descriptions usually involve unacceptable computational times. Using the proposed methodology and general-purpose solver Gurobi, optimal solution for short-term problems (24–48 h) are found within few minutes. In the case of medium- and long-term problems (weeks to months), near optimal solutions (with an error usually under 0.5% and 1.0% respectively) are found within 2 h.

In this paper a framework for CHP plant operations and trade planning suited for an industrial application was presented. The main merit of this paper is the provision of complete and in practice tested methodologies for model development of a generic CHP plant and optimization problem formulation including means for its solving. The important feature of the framework is its ability to handle trading with user-defined power products on energy markets, the feature which has not been seen in known literature within this scope before. Techniques aimed at implementation of a decision support tool for district heating plants were developed, facilitating the rapid prototyping of plant models. With an appropriate implementation of the presented framework models can be created using a drag-and-drop block-oriented graphical modelling tool, such as OMEdit for Modelica language [16]. The performance of an optimization tool based on this framework was illustrated on scenarios from practice. The inevitable exponential dependence of computational time on horizon length has been shown. Solutions to short-term planning problems are found within few minutes. Medium- and long-term optimization problems converge to optimal or near optimal solutions within 2 h with an error usually under 0.5% and 1.0% respectively. The long-term instances are handled by horizon cutting which provides generally sub-optimal solutions but with less computational efforts. More than a year of successful operation of optimization tools based on the presented methodology in two district heating plants suggests that the proposed models, approximations and formulations are valid. Moreover, plans proposed by the tool for months October 2010 to May 2011 have been compared to the usual practice in operations planning of the plant in Fig. 1. The profit increased by 5.6% on average.